Recession, recession – will we see one in 2020? And will it bring about a rally in gold then?. True or false? In today’s article, we’ll test the ‘recession in 2020’ narrative and we’ll then show you what it all means for the gold market.

One year ago, we wrote that “we do not expect recession next year or even in 2020”. We were right: the U.S. economy did not slide into a recession in 2019. But will it happen this year? After all, the current economic expansion lasts 127 months. We know that expansions do not die of old age, but we also know that the next economic crisis will one day arrive, sooner or later. Twelve months ago, we were skeptical about a downturn in 2020, as “the lack of clear typical warning signs that preceded the past recessions put the ‘recession in 2020’ narrative into question”.

However, we were quickly forced to change our stance and turn more cautious. In March 2019, the yield curve has inverted for the first time since 2007, while in May, the spread between long-term and short-term Treasuries went much deeper into negative territory. As the chart below shows, the yield curve ceased to be negative in October, but this does not negate the recessionary signal sent earlier. The milk has been spilled. When the genie flies out of the bottle, you can’t just push it back. 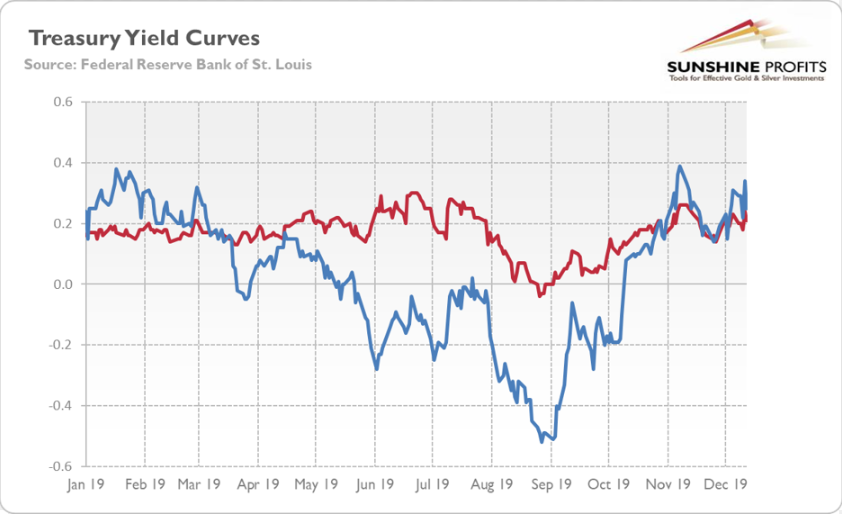 Actually, just as important as when the yield curve inverts is when it becomes positive again. Historically speaking, the reinversion of the yield curve signaled the eased upward pressure on short-term interest rates due to the bankruptcies of the companies that needed funds most desperately. Based on data from the last two recessions, the next economic crisis should appear within four to six months from turning positive, i.e., between February and April 2020. However, this time, the yield curve become positive again because the Fed worried about potential economic problems and cut interest rates in advance. So, this time, recession could arrive later that the yield curve suggests.

And what about other recessionary indicators? Well, the unemployment rate is still at record lows, as the chart below shows. It has not started increasing, so it does not signal recession. Neither Sahm’s index, which is based on the (we described that indicator in detail in the July edition of the Market Overview), predicts recession right now. 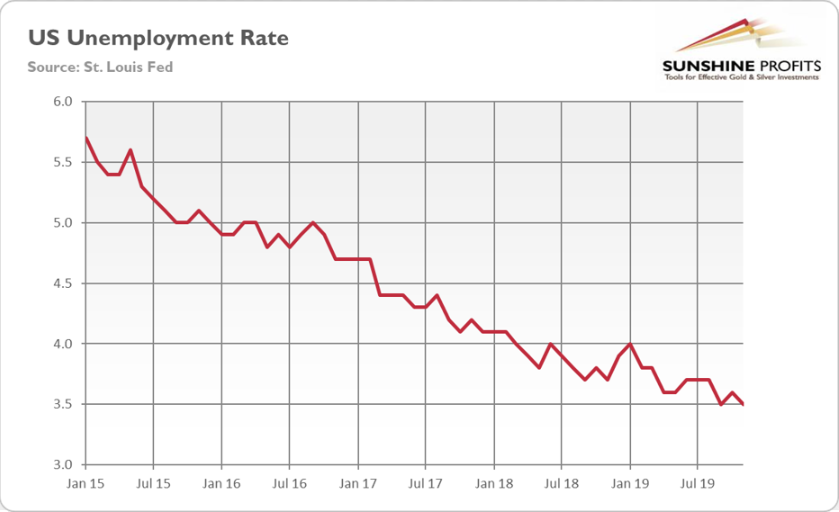 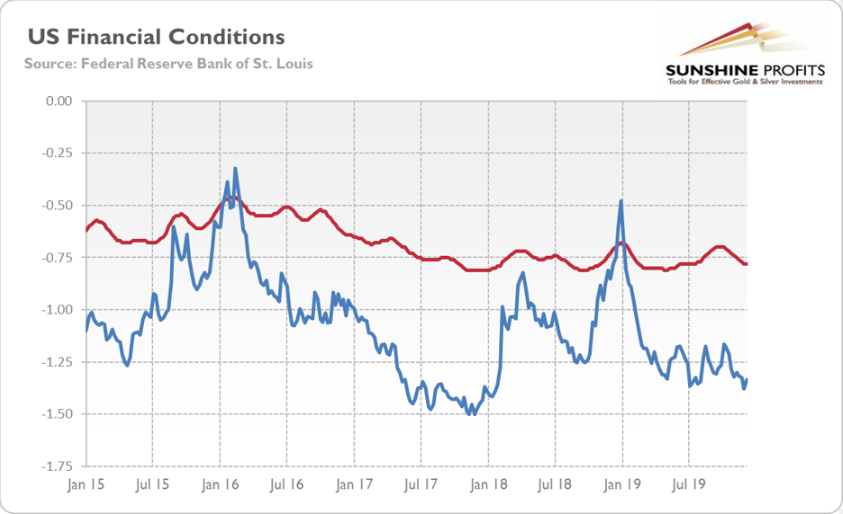 On the other hand, the smoothed recession probabilities for the United States (we have detailed this model in detail in the July edition of the Market Overview) have increased recently. As one can see in the chart below, the spike at the end of the chart reflects the rise in recession probability from 0.38 percent in August to 9.90 percent in October 2019. 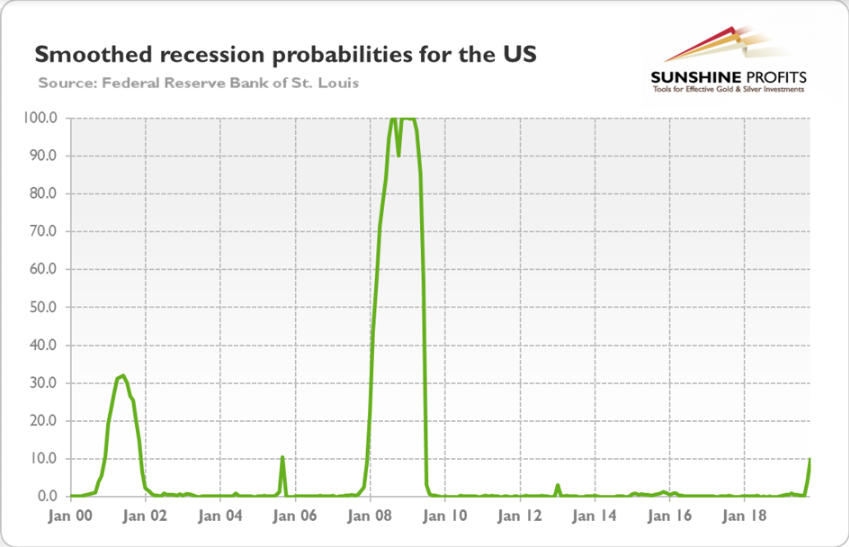 Smoothed Recession Probabilities For The U.S.

Chart 4: Smoothed recession probabilities for the US from January 2000 to October 2019

To be clear, the odds are still very low. However, such a sudden, big jump is intriguing, or even disturbing. And investors should remember that the probabilities of recession are available only with a two-month delay. Anyway, if the upward trend continues and the recessionary odds jump above 20 percent, the next economic downturn might be then just around the corner.

Summing up, the gold bulls are waiting for the U.S. recession. The yield curve inversion in 2019 signals economic downturn in 2020 or early 2021. So far, the yield curve has been the most powerful recessionary indicator, so the precious metals investors should not downplay it.

However, other indicators – such as the unemployment rate or measures of financial conditions – do not confirm the recessionary call. Actually, the phase one trade deal with China could ease some concerns and revive investment spending, putting off the recession. So, gold bull could have to wait for a rally in the yellow metal a bit longer.

Housing Consistent With A Recession In 2020

Existing Home Sales Deviation Over the past year, 4 housing indicators have moved in ways consistent with patterns seen in 3 previous recessions. Housing is Signaling a Recession Despite optimistic talk from Fed regional presidents, […]

What is a Recession? Signs, Causes & Impact on Investors

Recessions can devastate the economy and disrupt the fortunes of individuals, businesses, and investors. But economic decline in the business cycle is inevitable, and your trading chops can be defined by how you respond to […]

Crude Oil and Gold Talking Points: Crude oil prices returned some of their early gains With global recession increasingly predict, demand profiles are under urgent review Gold prices were steady but remain close to this […]

The United States-based, cryptocurrency exchange, Coinbase published a blog post justifying the technical issues that took place when the price of Bitcoin was hovering above 10K.  Why Coinbase Crashes At Peak Time? The Bitcoin community […]