Heading into the end of April, there was a lot to look forward to: the plethora of month-end economic data, earnings, Central Bank meetings, and the recent collapse of prices. However, at the end of the week, little of it mattered. The data was bad. Earnings were ok, with little guidance. Central banks are on “wait and see” mode. However, most of this was priced in the market already. Oil did bounce 12%, however, that is minor relative to the price, near $19.50. This week will be about the reopening of some US states. This reopening will set the bar for reopenings to come. The week culminates with on Friday.

WTI crude managed to bounce back from its recent crash. The commodity closed strong into month-end near 19.50, a gain of 12%. Friday was the first day of the supply cut agreed to earlier in April by OPEC and friends, but many questions remain. President Trump said that the United States is buying oil for the Strategic Petroleum Reserve (SPR), but what is going to happen to the 70+ oil tankers sitting off the coast of California? OPEC+ has agreed to cut back production, but can they actually stick to their production limits this time? In addition, with the world beginning to slowly reopen, will the demand for oil be there like it was in the past?

So, what happens now that the President’s order to “shut down” the US economy has expired? States will begin reopening, at their own pace. Some states will only open parks and outdoor areas, while others announced they will go full throttle, reopening movie theaters, restaurants, and salons. Others may be somewhere in between. The all-important statistic that everyone will be watching is the number of new cases, especially in states that are opening aggressively. This will determine if reopening is successful or if states will need to shut down again and start over. However, don’t count on people running out to their favorite restaurant or hotspot right away. It is going to take time for people to gain trust that infection rates are still low where they live. In addition, many places will have capacity limits and new policies, such as wearing masks. It will take a while for people to get used to these new restrictions, which will probably remain in place until there is a vaccine.

Major tech firms beat on earnings last week, such as AAPL and MSFT, however, the surprise was the lowered guidance or lack of guidance at all for many firms. Significant earnings due out this week are as follow: DIS, GM, PYPL, and BMY, in the US. In addition, major China earnings due this week are JD (NASDAQ:), BIDU, BABA, and TECHY.

The RBA and the BOE meet this week, however, as with central bank meetings last week, these are likely to be low risk events. Since the spread of the coronavirus began 2 months ago, central banks have been acting “On Demand”, as the measures have been called for. Therefore, the meetings have been more like “updates” of what the Bank’s Committees are thinking moving forward (which for the most part has been “wait and see”). The week ends with the US and Canada employment data. The current estimate for the US Nonfarm Payroll April headline number is -21,000,000 vs -701,000 in March. The estimated unemployment rate is 16% vs 4.4% in March! Markets are already expecting bad data, but could it really be this bad? Other important economic data is as follows:

Chart of the Week: Weekly 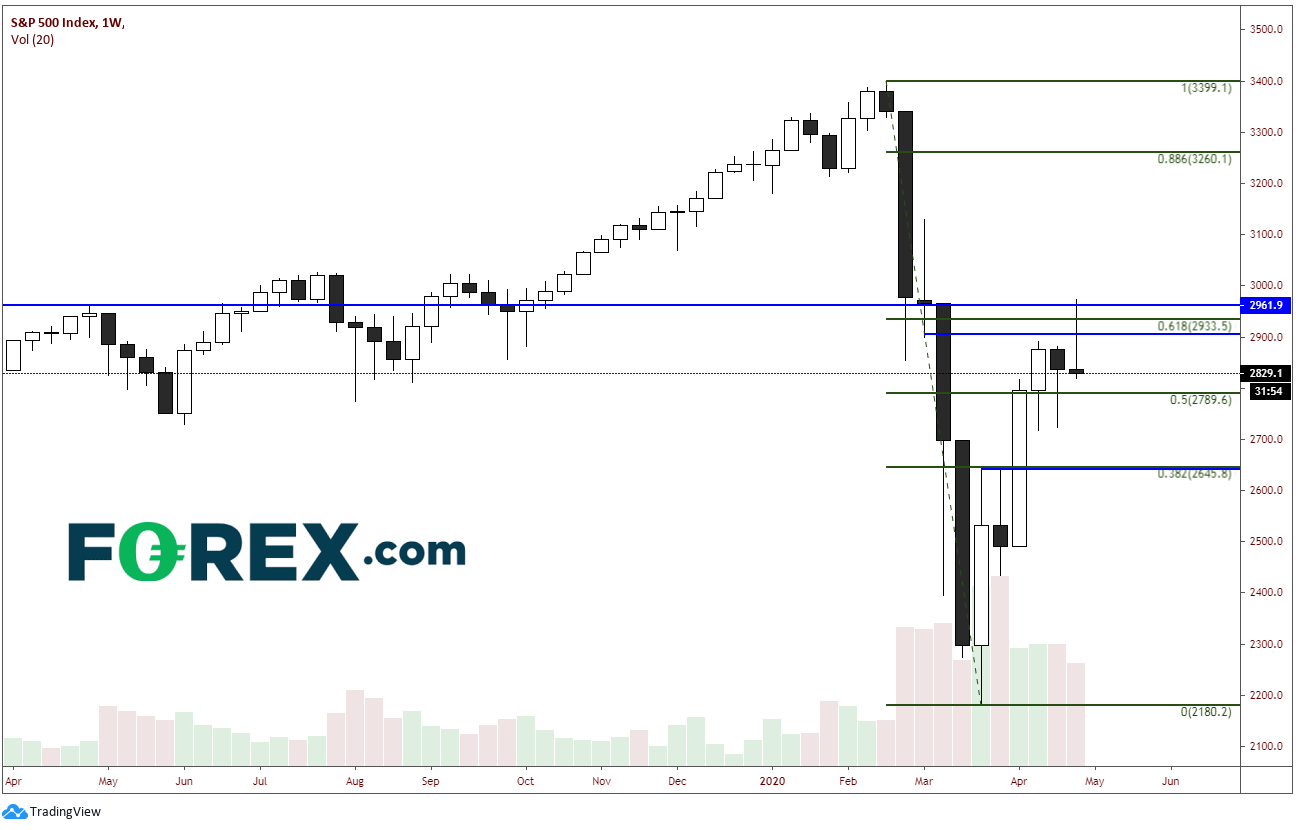 This is such a beautiful chart. After moving lower from all-time highs in February near 3400, the price quickly fell to 2182 in a few weeks’ time, a decline of 35%. However, since the week of March 23rd, the has bounced to horizontal resistance and the 61.8% Fibonacci retracement of that same time period, a bounce of 36%. The weekly candlestick formation is called a gravestone doji, in which prices open the week and trade to new highs. However, by the end of the week, prices have fallen back and closed at or near the opening price. This signifies that the bears were waiting for stops to be taken out above the 61.8% retracement level to aggressively sell the index. This is an extremely bearish candle (hence the name). Watch to see if stocks continue to move lower next week!

Everyone take a deep breath and hope that people will respect each other and maintain guidelines in states and countries that are reopening. The better we do; the fewer people will be infected!

Charts to Watch: GBP/USD coiled up for a move to soon unfold AUD/USD is trading down into major support USD/JPY is backing down into trend support GBP/USD bounced off support yesterday just prior to the […]

Market Indexes: It was an upmarket this week, supported by a Q3 report showing 2.1% growth, flat vs. Q2 ’19. Strong offset the weaker business investment. “Dow Jones Market Data figures going back to 1950 […]

What a move yesterday evening (in the US) on Christmas Day in the .The dollar fell over 100 pips yesterday and bounced back immediately. Stocks are at all-time highs, again. crossed 9,000 for the first […]

Cardano (ADA) has been caught within an intense uptrend in recent times, which has allowed it to firmly outperform both Bitcoin and most of its other peers. This intense rally has come about as development […]

The dollar is going down, and it is bullish for the markets. The two most closely monitored instruments of the world markets, and S&P500, signal a breakthrough of their downtrends. The dollar not only declines […]