The Federal Reserve is widely expected to give its clearest signal yet next week that tapering is just around the corner. But the Fed will have to fight for attention as the Bank of Japan, Bank of England and Swiss National Bank meetings are some of the other policy gatherings taking place in the coming days. However, central banks will not be the only ones to fall under the limelight as elections in Canada and the flash PMIs for September will be watched closely too.

The Federal Open Market Committee (FOMC) announcement on Wednesday will undoubtedly grab the chunk of next week’s market headlines as policymakers will likely end months of speculation by strongly flagging a taper decision for the November meeting. August’s soft payrolls numbers dampened expectations of an earlier taper action and although there is some evidence that both economic growth and price pressures are easing in the United States, the risks to inflation are clearly tilted to the upside. Many, including some FOMC members, think the Fed is already behind the curve on inflation so the question is, can Powell & Co afford to delay a decision any further?

Nevertheless, with a tapering move sometime this year a foregone conclusion, investors will be more concerned about what the Fed will project in its latest quarterly forecasts, and of course, the updated dot plot chart. In the last dot plot, policymakers had penciled in the first post-pandemic rate increase for 2023. But there’s been a notable hawkish shift since then so the median projection might point to a 2022 rate hike, which could give a bit of a lift to both Treasury yields and the US dollar. 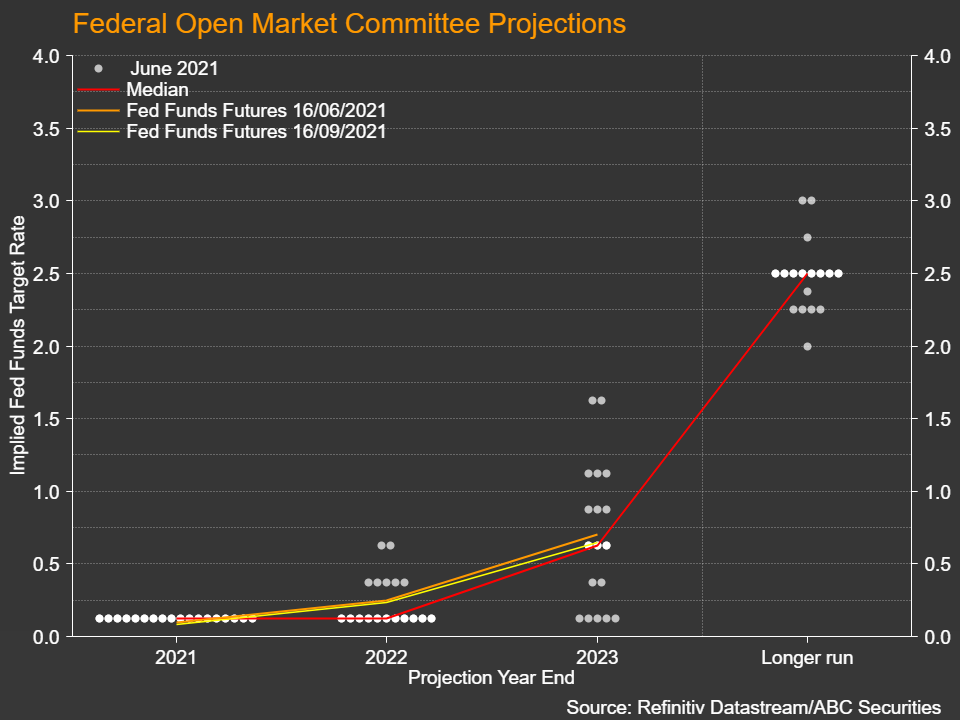 SNB and BoJ to stay the course

The Swiss franc shouldn’t count on much of a reaction from the Swiss National Bank’s policy decision on Thursday. The SNB is almost certain to hold rates at -0.75% and indicate no desire to tighten policy anytime soon, while repeating that the franc remains highly overvalued.

The Bank of Japan meeting might be another bore on Wednesday as there is no prospect of a near-term change in policy. Japan’s economy is struggling at the moment with many regions still in a state of emergency. Although there is some light at the tunnel as infections are falling and the country’s vaccination rate has caught up with America’s, inflation remains very muted despite the surge elsewhere. CPI numbers due on Friday are expected to show core inflation being flat in August, having been negative for the past 12 months. 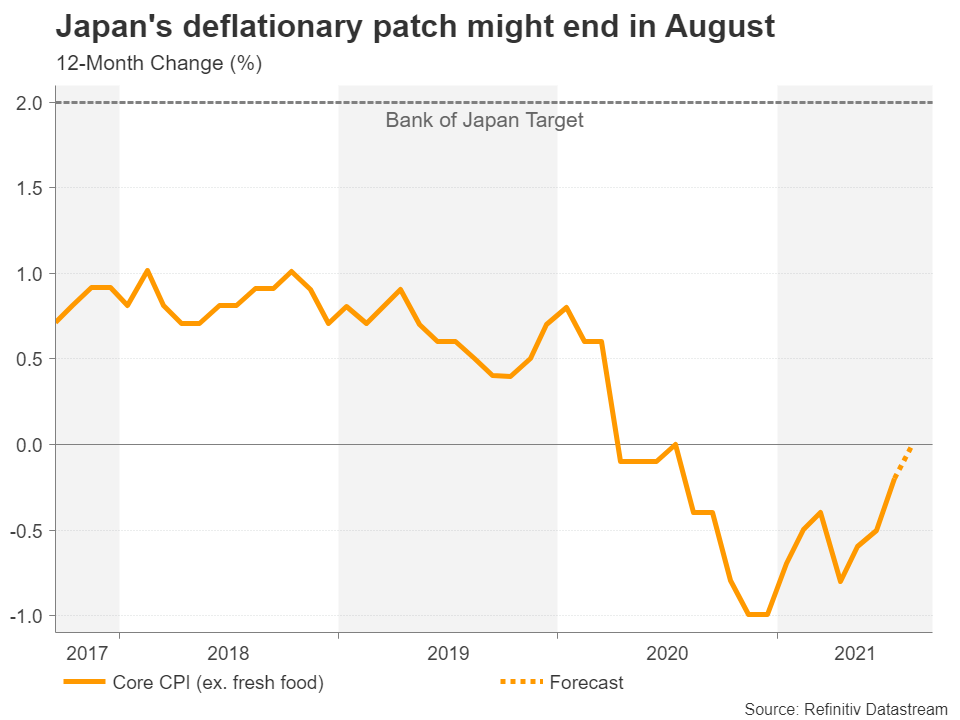 The yen will probably shrug off both the BoJ decision and the CPI data as neither will have any significant bearing on the long-term policy outlook for Japan. However, the LDP leadership vote on September 29 to elect Prime Minister Suga’s replacement might have more of an impact on the yen so that’s another reason for traders to stay on the sidelines next week.

Finally, the Bank of England will wrap up the central bank activity on Thursday by keeping its policy settings unchanged. However, the odds are high that the Bank will outline more details around its QE exit strategy. So far, the BoE has strongly implied but not outright said that its bond purchases will come to an end in December. However, following some unexpectedly hawkish remarks lately by Governor Andrew Bailey, the Bank could make its intentions known that QE will definitely not be extended after December 31, 2021.

But as far as the rate hike path is concerned, the updated forecasts won’t be available until the November meeting so the pound might not rise much beyond its recent highs on the back of Bailey’s comments. Another risk for sterling next week is Thursday’s flash PMI prints. The UK economy has lost some steam lately as the reopening boost appears to have faded more quickly than anticipated. So if the PMIs disappoint again, the pound could struggle to make any headway against the greenback. 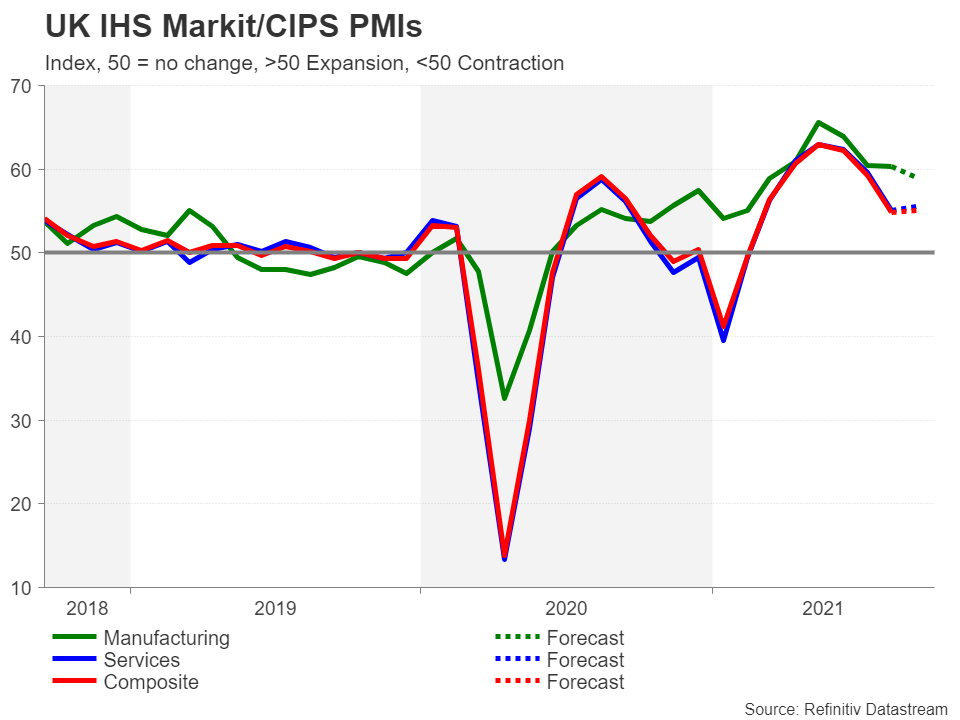 Eurozone PMIs to ease down a notch

The flash PMIs will also be watched in the euro area as it’s the sole highlight on the European calendar, with the only other important release being Germany’s Ifo business climate gauge on Friday. The Eurozone economy just had a bumper summer thanks to looser virus restrictions and a successful vaccination campaign. But there are fears that the reopening-led growth is peaking just like it has in the US and Britain. Investors will therefore be monitoring Thursday’s flash PMI readings carefully for any signs that slowing growth in other countries and rising inflation across the bloc may be weighing on Eurozone activity.

Should the PMIs dip more than expected in September, the euro’s two-week losing streak could stretch for another week. 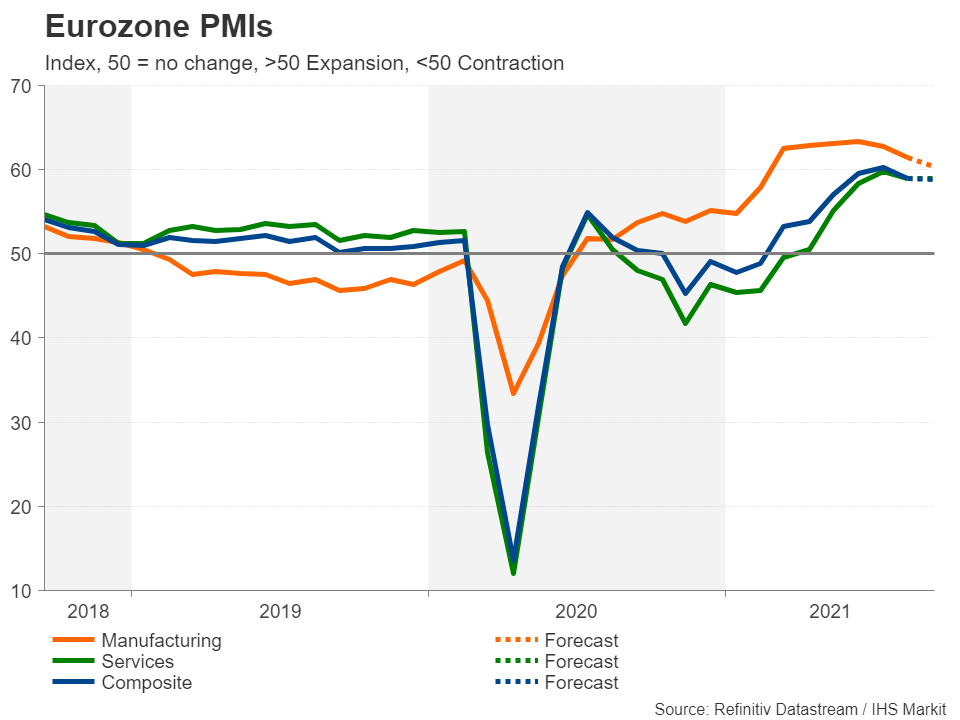 Canadians are heading to the polls on September 20 after Prime Minister Justin Trudeau called a snap election to capitalize on his government’s popularity for doing a relatively good job in steering the country and the economy through the virus crisis. However, Trudeau’s rating in the opinion polls has since nosedived as voters have questioned his judgement for forcing an early election in the middle of a pandemic. Although his Liberal party has regained some ground in recent days, a win is by no means certain. Should the opposition Conservative Party manage to oust him, either through an outright majority or by forming a coalition, there could be some repercussions in the FX markets.

The Conservatives want to rein in some of the massive spending the Liberals have undertaken in response to the pandemic and this could be seen as holding back growth and ultimately lowering expectations of how many rate hikes would be needed to contain soaring inflation in Canada.

Hence, the election outcome could spark a selloff in the if Trudeau is defeated.

Markets await ECB economic projections and US CPIs Yields fall below 1.5% Bitcoin recovers Key Financials Having rallied during the Asian session, futures on the retreated, along with European shares on Thursday ahead of the […]

Euro Steady Ahead Of U.S. Inflation

The euro is almost unchanged on Friday. In the North American session, is trading at 1.2190, down 0.02% on the day. In Germany, Covid-19 cases have been declining in recent weeks, as the vaccine rollout […]