After speculation, the move was a post poor move or because of coronavirus fears in Japan, it seems as though Japan’s Government Pension Investment Fund (GPIF) was the main seller of Yen, reallocated funds to buy foreign bonds. Thursday and Friday were a wake-up call for equity markets as more cases of the coronavirus had been discovered outside of China, particularly in Iran, Lebanon, and South Korea.

This led to concerns about further manufacturing disruption. Oddly enough, earlier in the week, lowered guidance from Apple (NASDAQ:) and Walmart (NYSE:) couldn’t even spook the market. The is down nearly 1.5% on the week. One more thing….. Gold was leading the risk-off move all week, trading higher all 4 days this week (Monday was a US holiday), and is up almost 4% this week.

With a light economic calendar most of this week, the main focus is going to, unfortunately, be on the cononavirus. After cases were reported in Iran and Lebanon, the World Health Organization’s (WHO) Tedros Adhanom Ghebreyesus said the virus can still be contained, however “the window of opportunity is narrowing, so we need to act quickly before it closes.” The virus will be closely monitored this weekend and throughout next week.

If it continues to spread, stocks could continue to weaken, especially if more cases are identified in the Europe and the US. Other large companies that rely on manufacturing from China are also likely to warn on Q1 earnings. Ironically, as stocks sold off toward the end of the week, yen pairs were only down slightly (and still closed up a large amount for the week). This indicates that there are still sellers of yen in the market. (Yen pairs are highly correlated with risk. As stocks sold off, yen pairs should have sold off as well). Watch for more yen selling next week. As we discussed Thursday, if closes about 112.40, it could run to 115.60.

The US caucuses and primaries take a back seat next week; however, the Nevada caucuses are this Saturday, February 22nd. Next weekend is the South Carolina primary on Saturday February 29th. Candidates will be gearing up this week for the Super Tuesday on March 3rd, when 15 primaries will be held! In addition, Super Tuesday will also be the first of the primaries which will have Michael Bloomberg’s name on the ballot.

Earnings season is just about over, however take note of BIDU and JD this week as these 2 Chinese companies may provide lower guidance and discuss their outlook on the coronavirus. 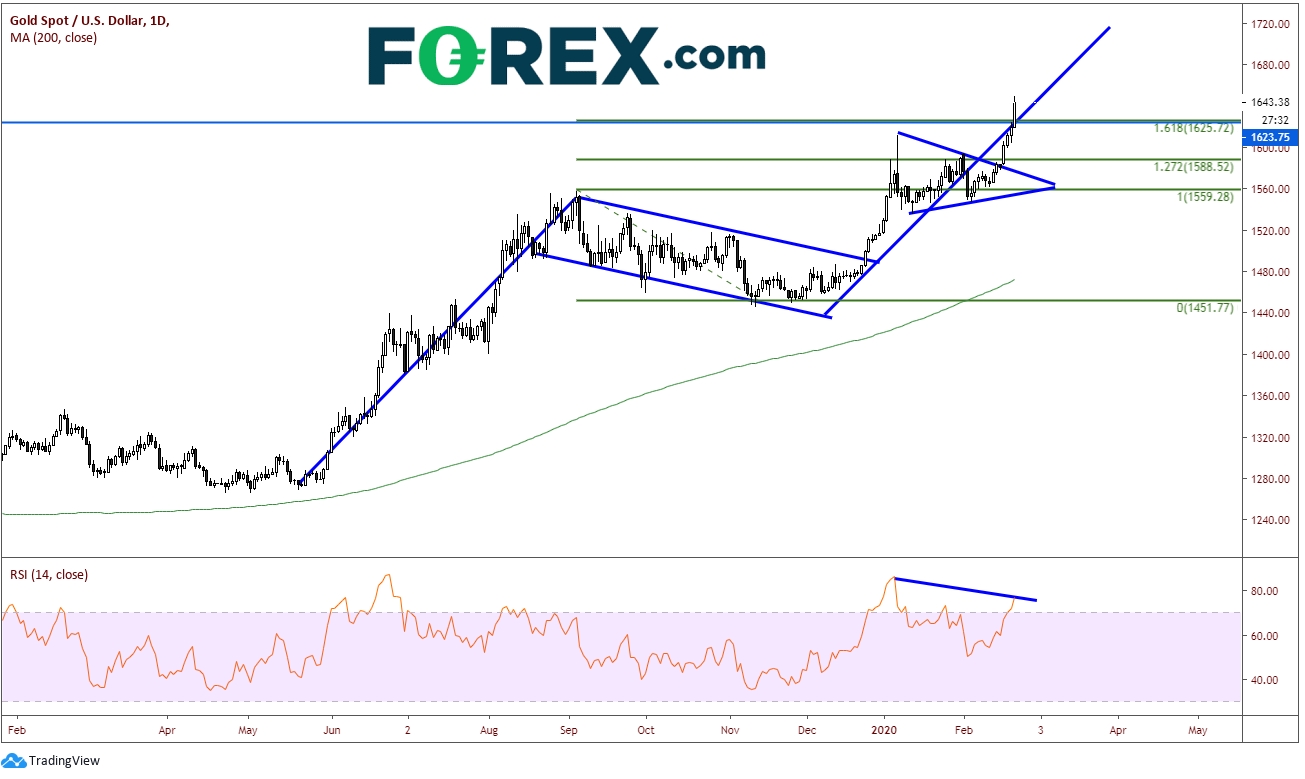 What a massive 4% move on the week for the precious metal! But can it continue? Technically, price is trading beautifully, as it broke out of a flag pattern in December and paused at the 127.2% Fibonacci extension level from the September 3rd high to the November 12th low near 1588. Price then formed a symmetrical triangle at that level, only to bust higher this week and continue on its path toward the larger flag target near 1720. Price may pause as the RSI is overbought and diverging, however if stocks continue to sell off next week, funds may continue to flow into gold and push price higher.

We’re now in week two of serious disruption as a result of the coronavirus, and the markets are in the middle of what’s looking like an extremely steep crash. Only 1987 can compare, and those […]

If a listed issuer believes that, as a result of the restrictions, it will be unable to publish a preliminary announcement of results, it should contact the Exchange to discuss the situation. The Stock Exchange […]

2020 U.S. equity gains wiped out by public health emergency Dollar drops Gold and Treasurys near multi-year highs All U.S. equity index gains for 2020 were wiped out on Friday, eviscerated by fears the still […]