You see, it’s not a Trump thing. It’s an ‘America is so hopelessly indebted (as are other developed economies) that they have no choice now’ thing.

However the election shakes out – most likely Democrat president and congress, Republican senate – the stock market is cheering two things in my opinion. It is cheering US compromising fiscal stimulus (Fed prints, politicians spend) and the coming of more US dollar compromising monetary policy (Fed prints, Fed monetizes bonds AKA debt, Fed screws with any other esoteric tool it can get its hands on in the age of TMM, AKA Total Market Manipulation).
I have a still profitable position against the that is about to tick un-profitable this morning. That was my hedge against a firming US dollar, which is the anti-market to the US stock market especially, but also to many global markets, because I am long US and global stocks. I may have to pull back to hedging stocks (including gold stocks) with high cash levels. So says the ongoing inflationary operation.

had projected an A-B-C bear market bounce in Uncle Buck, just to keep the macro honest and put a spook into market bulls. But it appears – due to the joy breaking out everywhere – that I will have been wrong about ‘C’. That’s what this breakdown below support (now short-term resistance) says, anyway. 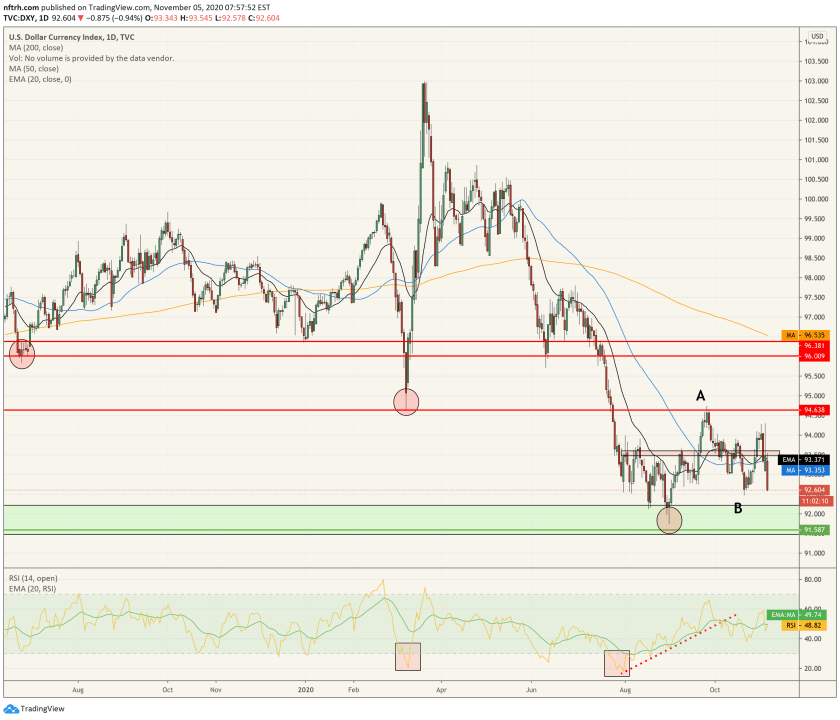 We are going bananas not because Trump is/was just another politician when it comes to the modern American tradition of debt-leveraged inflation to disenfranchise the middle and poor and enrich the already spectacularly wealthy. We are going bananas because that’s the only path out of this mess that people in power who want to stay in power will choose. Always.

They will choose inflation by currency devaluation because it is a neat macro parlor trick that will boost certain desirable asset prices to the degree that the average person will think they are doing the right thing. After all, running a true savings/investment-based economy featuring Larry Kudlow’s mythical “King Dollar” would crash the , for one.

Now, the Republican senate will probably stand in the way of some of the Democrats’ plans, like the Green New Deal when that pork wagon tries to roll into town. But they will not stand in the way of the ongoing and massive bailout stimulus aimed straight at the US dollar going one way and enriched asset owners going the other.

There may be some volatility here in the next few weeks and a market correction could still come about (unfortunately, the unpredictability of Trump’s tantrums will probably drive that, not some guy’s charts) but when it all shakes out and if it shakes out as currently indicated politically, America will still be going bananas because it’s the same tired old game plan Trump was using (even before the Pandemic, as the economy was slowly decelerating and the yield curve steepening in mid-late 2019).

Sit back, relax, have a banana (smoothy, daiquiri, with your corn flakes or straight up). There are only two ways this story can ultimately end. Either a deflationary whirlpool or ole’ von Mises’ Crack-up-Boom.

Lower UST yields are hardly a panacea for short trades. If the main factor driving the USD was higher UST yields, removing this key recent driver can reveal other concerns bubbling under the surface.. Put […]

The strengthened markedly overnight as US bond yields firmed after Mr Powell disappointed the doves. The dollar index rose through its 100-DMA on its way to a 0.75% gain to 91.63. Although unchanged in Asia, […]

Bullish We are currently at 151.51 in a channel.  We have convergence in play for the up move. If we can break this resistance, we are looking for a move to the ATR Target at […]