The USD/CAD fell to 1.2046 low on Wednesday, its lowest trade in six year as the loonie remains the sole major currency that has traded higher throughout the pandemic. It’s end for the week at 1.2105 was just points from Monday’s close at 1.2101, the best finish for the Canadian dollar since May 15, 2015. 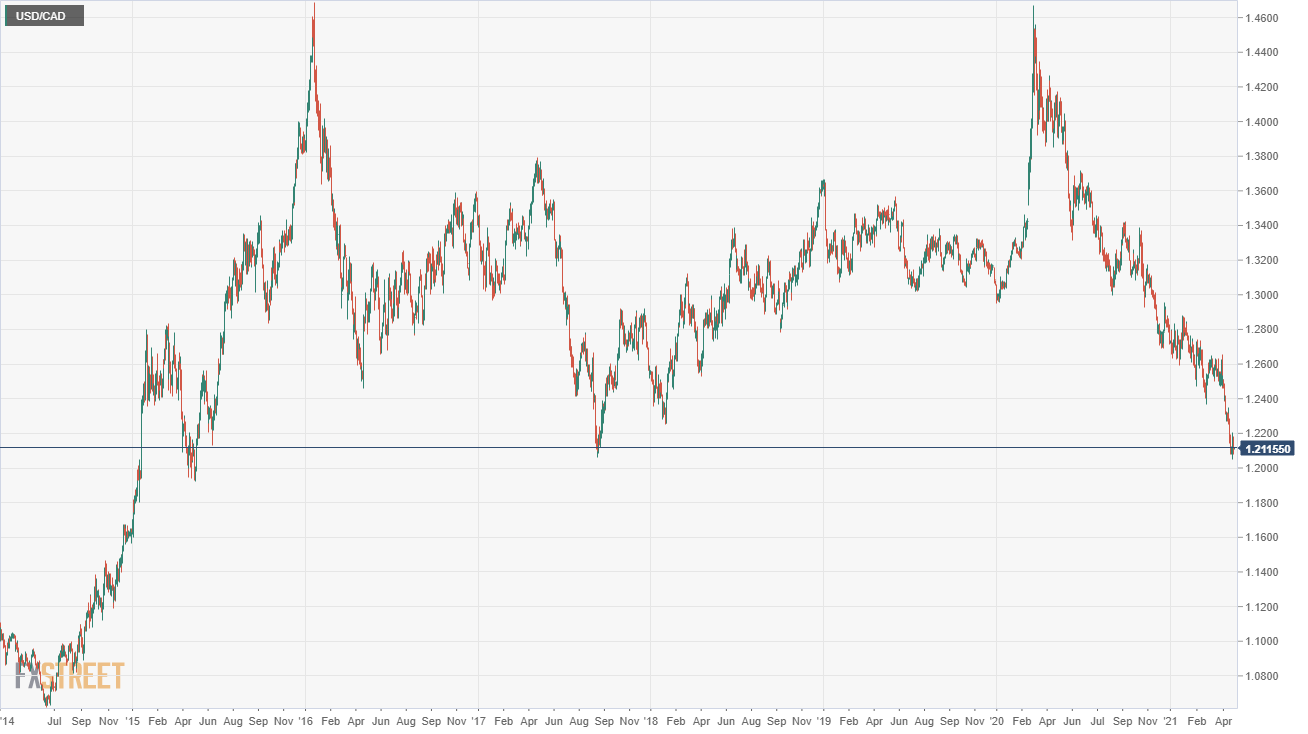 On April 21 the Bank of Canada (BOC) reduced its quantitative easing purchases of government debt  by 25% from C$4 billion a week to C$3 billion and since then the USD/CAD has fallen 4%.

Several factors have favored the Canadian dollar this year.

Commodity prices have risen 17.8% and that has been an asset for Ottawa’s largely resource based economy. Canada is a major exporter of crude oil, particularly to the United States, and West Texas Intermediate  (WTI) prices are up 35.6% from their December 31 close. 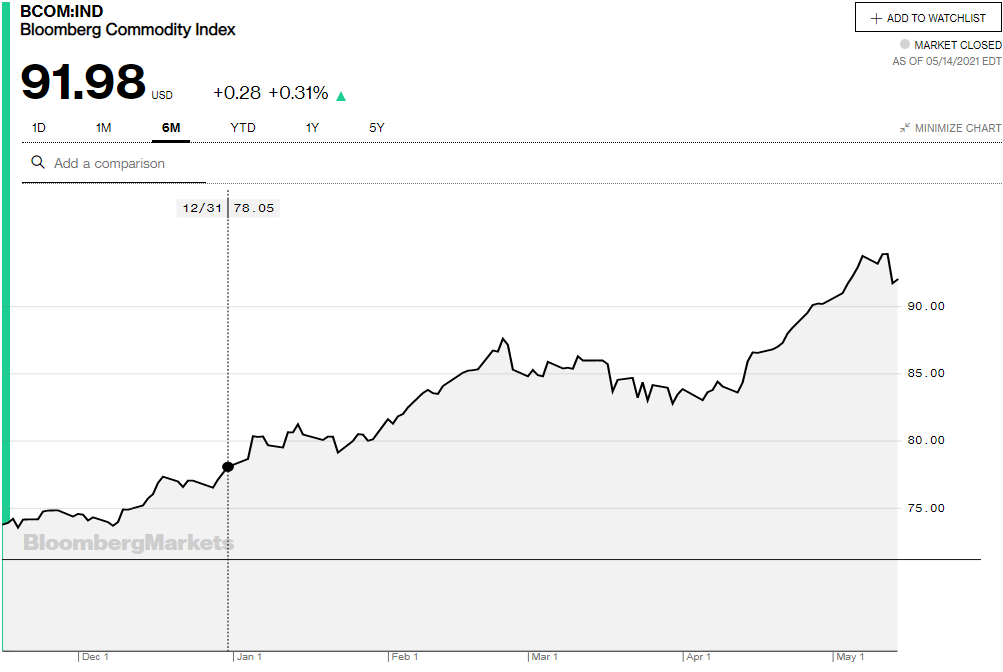 Yield increases on Canadian government debt have actually outpaced US Treasury gains this year. The Canadian 10-year bond has added 89 basis points to 1.563% while the US 10-year Treasury has risen 72 basis points to 1.635%. The spread has moved slightly in the favor of the northern currency. 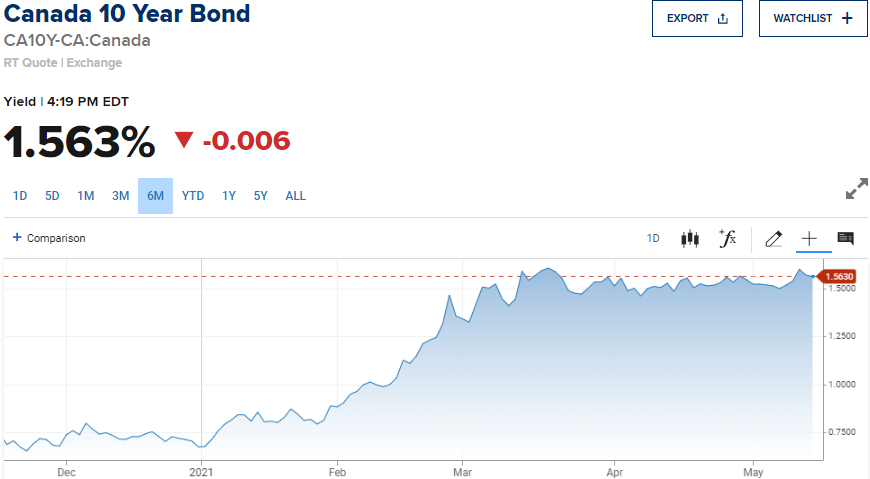 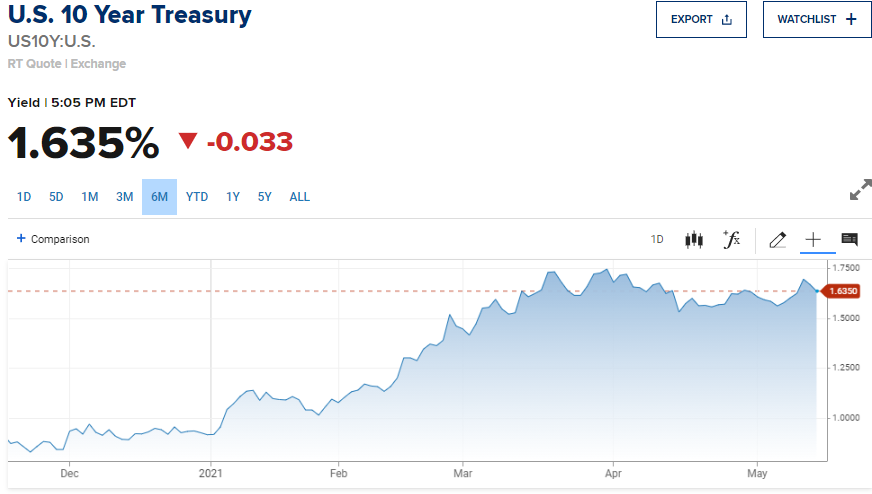 The Canadian dollar is in the unique position among the major trading pairs in that it can directly benefit when the economy of its currency pair colleague, the United States, improves.

Canada’s vaccination rate and the reopening of its economy has trailed the US by a wide margin.

American economic expansion surged 6.4% in the first quarter and is running at 10.5% in the second, according to the Atlanta Fed GDPNow model. Because the two economies are so closely tied, a good portion of that US growth reaches across the border to Canadian resource producers and manufacturing enterprises.

The vast Federal Reserve quantitative easing program of $120 billion a month also benefits the Canadian economy and the loonie through the relative simplicity of cross-border financing and its support for US activity.

Consumer inflation in the US has tripled in four months from 1.4% in January and its impact is being felt across a wide range of goods. Wages are rising as employers try to entice workers back to their jobs. Markets had anticipated a sharp increase in annual inflation as the base effects of last year’s lockdowns work through the data.

With commodity prices soaring and raw material and component shortages spreading, markets were suspicious that more than just statistical variation was at work. That suspicion has been confirmed.

Only the 2-year, pinned by the Federal Reserve’s bond purchases concentrated in the short end of the yield curve, moved less than a point from 0.163% to 0.167%.

Treasury rates gave back some of their gains by Friday closing at 1.635%.

American Retail Sales for April on Friday were disappointing, coming in flat on expectations for a 1% increase, though March regained almost the difference as it was revised up to 10.7% from 9.8%. The Control Group slipped 1.5% in April. The forecast was for a 0.2% loss. March’s result was revised substantially higher to 7.6% from 6.9%.

Canadian statistics were negligible on the week. Manufacturing Sales were as expected in March and Wholesale Sales were considerably stronger. Neither had market impact.

The trends that have bolstered the Canadian dollar this year remain intact. Canadian yields have closed the gap with Treasury rates. At the beginning of the year  the spread between the comparative 10-year yields favored the US by 24 basis points, by May 14, that was down to 7 points.  Commodity prices remain strong and the potential for WTI to rise is excellent once the European and global economies find their post-pandemic footings. The lagging Canadian economy will, as the year progresses, leave its provincial closures behind and add domestic growth to that spilling over the border from the United States.

The potential for Canada’s April inflation rate, expected to rise from 2.2% to 3%, to run hotter is high.  When rising inflation is combined with the BOC’s already demonstrated hawkish intent, Canadian government rates could improve relative to US Treasury yields.

Technical considerations also favor continued loonie strength. The USD/CAD left all recent support levels in the past when it dropped below 1.2300. Current support references are from May 2015 and earlier and consequently weak.

Until one of the major fundamental trends mentioned above abate or reverse, the USD/CAD will continue to slide.

Canada statistics May 10–May 14 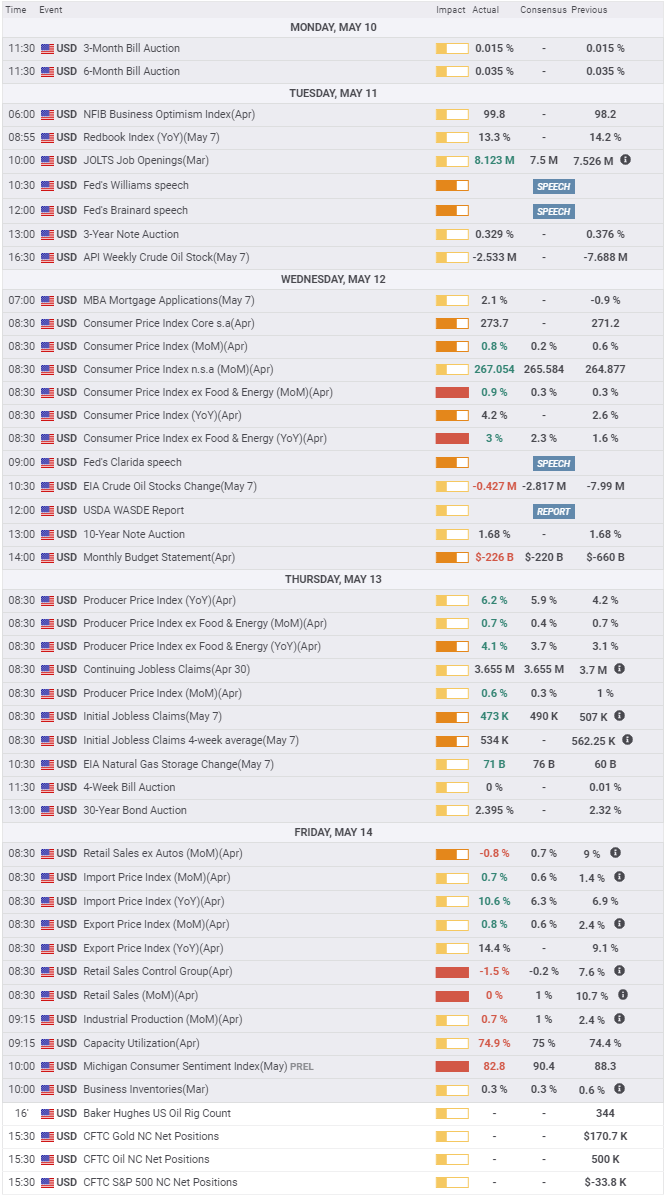 Canada statistics May 17–May 21

April inflation stands out in the week ahead.  A stronger that forecast report will aid the Canadian dollar. 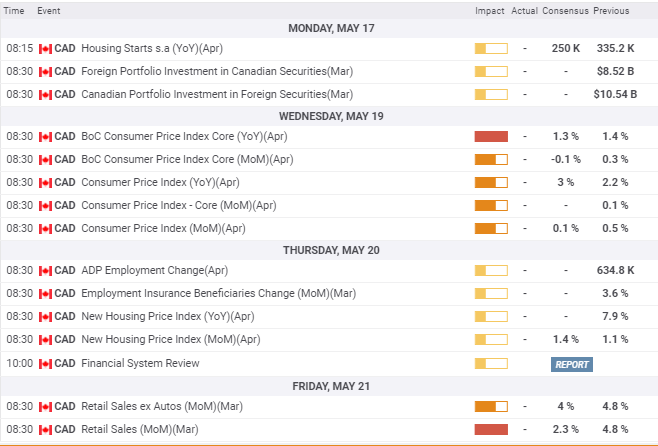 The US housing market in building permits and starts on Tuesday and Existing Home Sales on Friday should continue red-hot.The scarcity of new homes, especially of lower-cost inventory is a major component of asset price inflation. 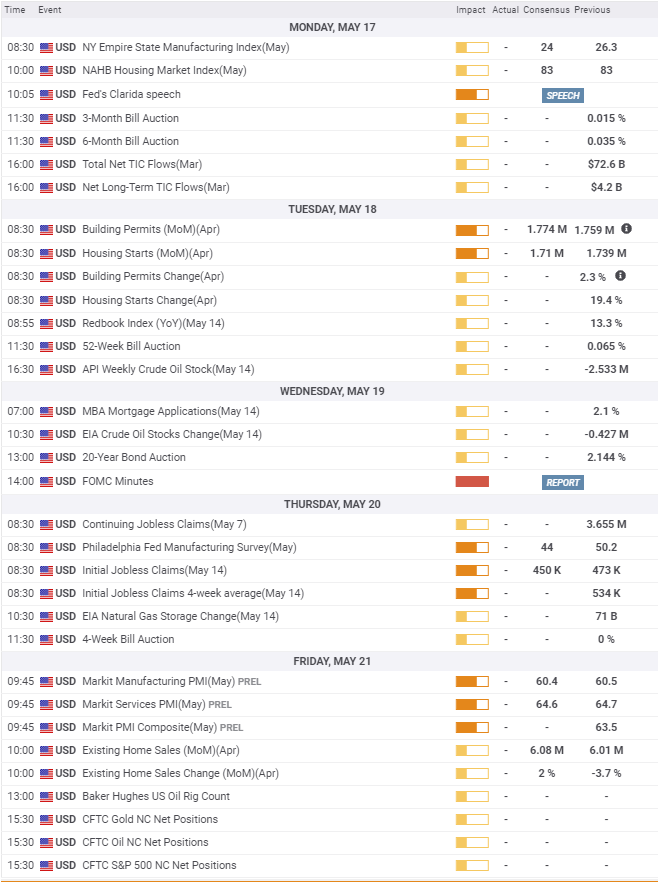 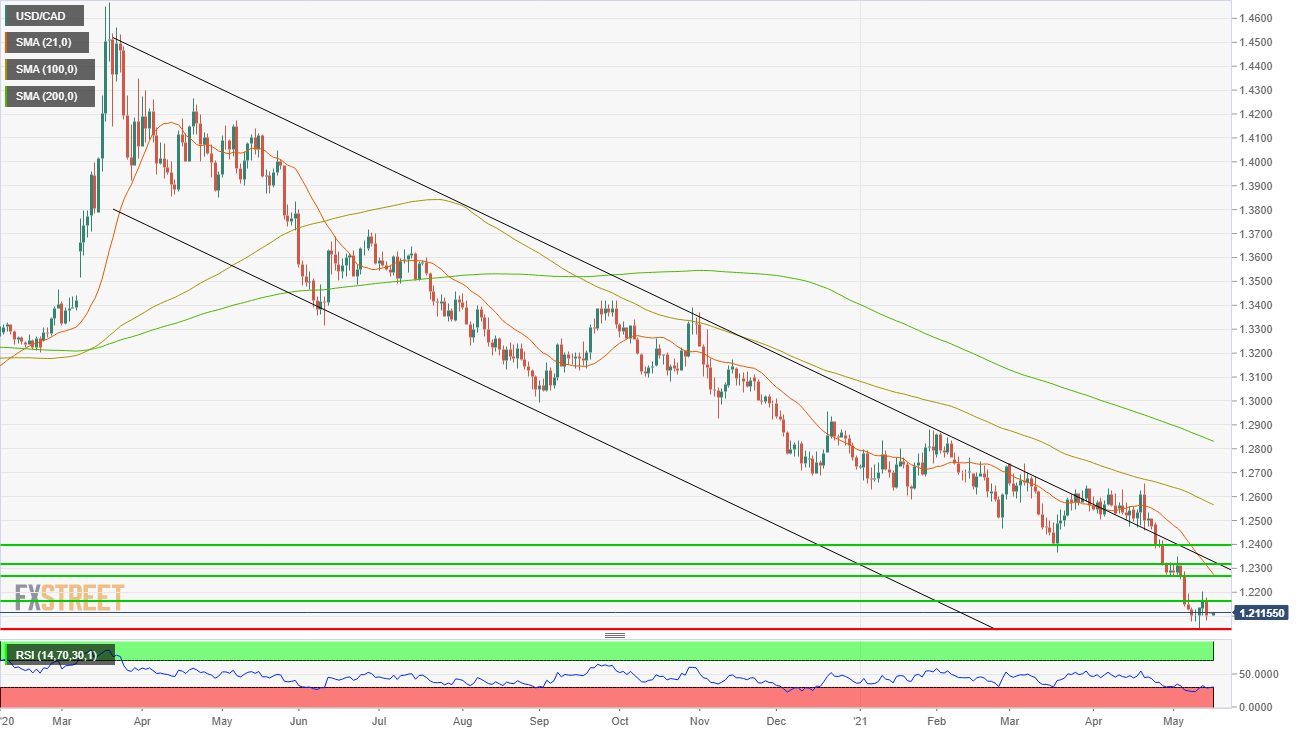 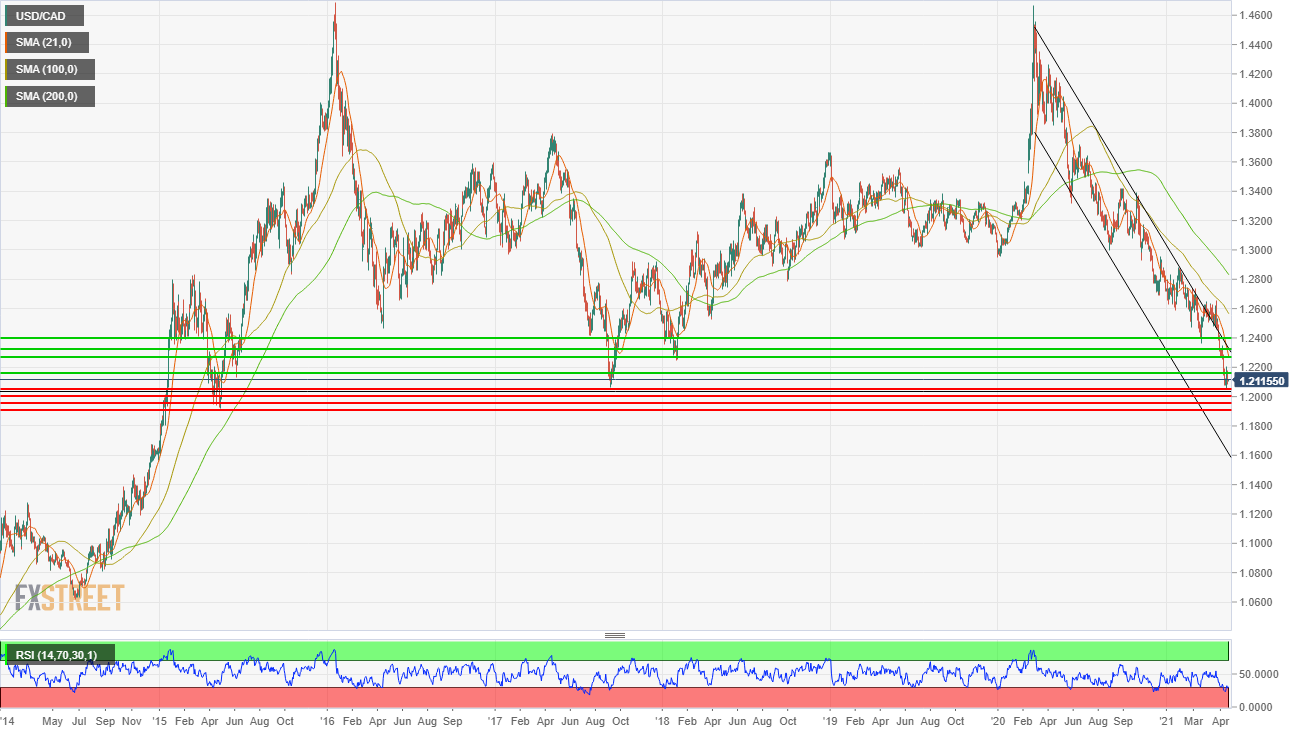 The FXStreet Forecast Poll envisions a minor technical bounce in the one month and one quarter outlook but such is dependent on a fundamental reversal in at least one of the trends bedeviling the USD/CAD.

Crude Oil Technical Forecast Following Cyclical Pattern After an impressive start to 2021, the oil forecast for the second quarter of the year is lacking an overly optimistic tone given a weaker picture for demand […]

Our next Trading Course will be starting in March (Discounted Price For Limited Time Only) and we have officially started accepting payments👉🏻 https://www.wetradewaves.com/forex-course (Forex Trading, Wave Analysis, Price Action, Forex Course, Learn To Trade, Elliott […]

After showing some good momentum northwards over the last week, Bitcoin (BTC) is down today by 9% wiping out all its weekly gains. Over the last week, central banking authorities have been attacking Bitcoin for […]