The Bank of Canada’s decision to taper its government bond purchases and the Federal Reserve’s unwillingness to do the same continues to order USD/CAD trading.

On the week the Canadian dollar gained 1.5% against its US counterpart and rose to its highest level since February 2, 2018. The USD/CAD broke through the previous pandemic low of 1.2365 from March 18 on Wednesday after the Federal Reserve’s dovish take on US interest rates. 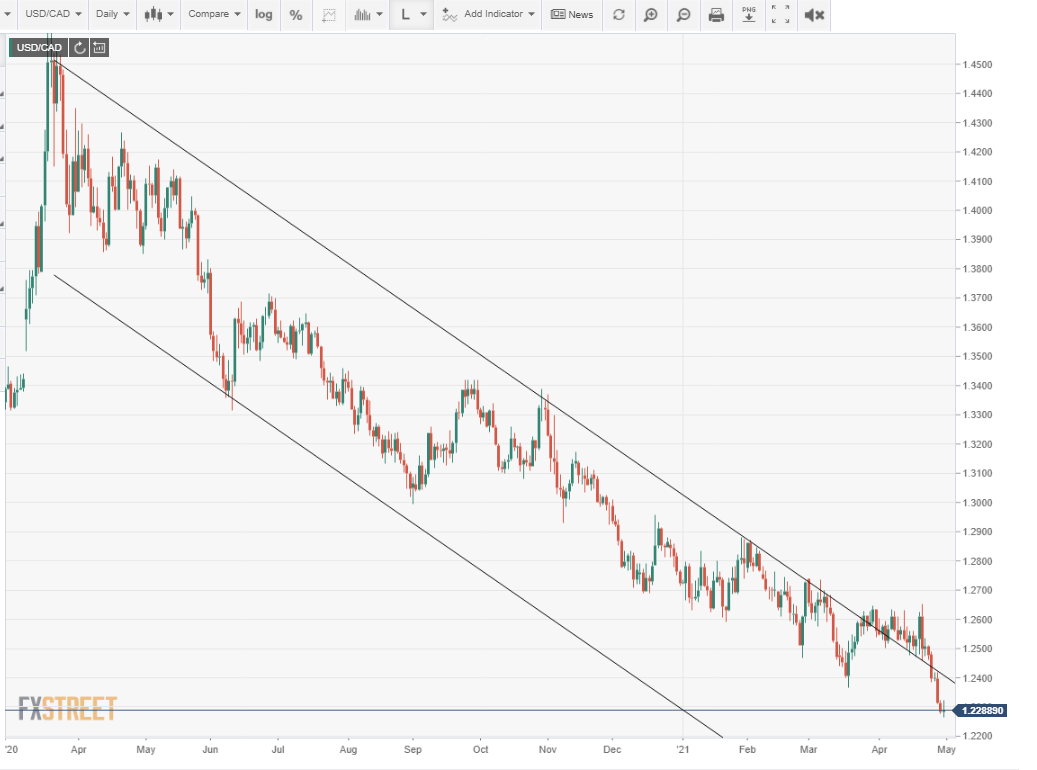 At the April 21 meeting, Bank of Canada (BOC) Governor Tiff Macklem had ordered a 25% reduction in the amount of bonds purchased each week as part of the government’s pandemic relief. The cut from C$4 billion to C$3 billion was the first withdrawal of central bank support anywhere in the world.

Soaring commodity prices have helped the loonie overcome effervescent US growth and what looks to be a near-record year for the world’s largest economy. 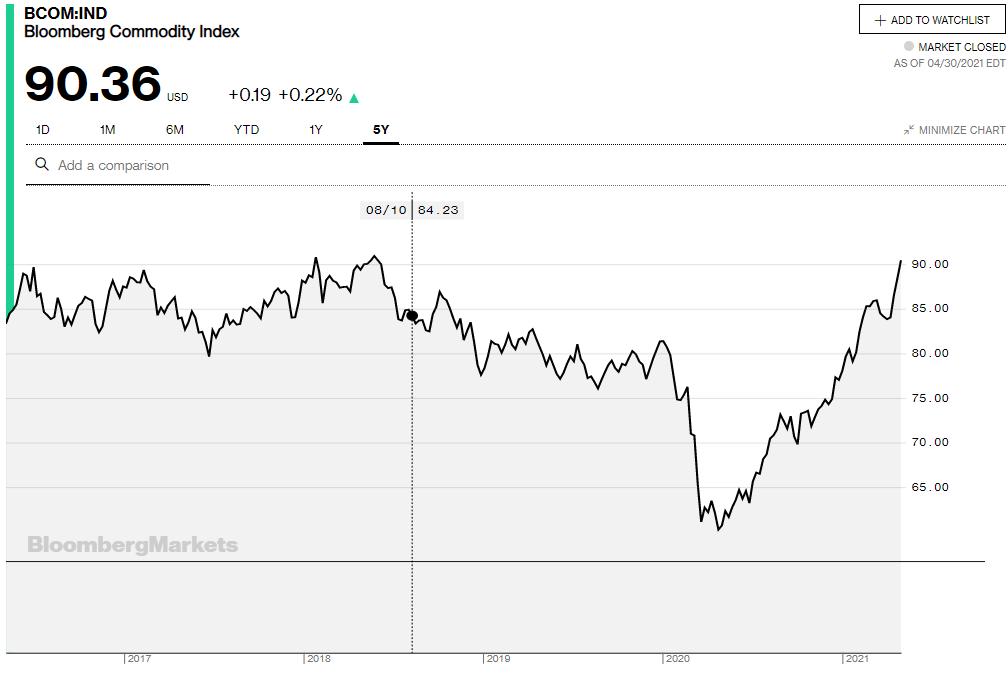 Canadian statistics had little impact on the market. Retail Sales were better than expected in February and GDP was a bit worse, but the information was not timely.

In the US, the Federal Reserve left policy unaltered as universally forecast.

Fed Chair Jerome Powell refused to speculate when or under what conditions the governors might reduce the $120 billion of monthly asset purchases that have pinned the short end of the Treasury yield curve.

The US economy expanded at a 6.4% annualized rate in the first quarter, slightly more than predicted. Initial Jobless Claims dropped to 553,000 in the latest week, the lowest level of the pandemic era. Inflation was stronger than projected in March with the headline Personal Consumption Expenditure Price Index (PCE) rising 2.3% on the year, outstripping the 1.6% forecast by a wide margin. Core PCE was 1.8% as expected.

The current bout of US inflation is temporary and largely due to the base effect from the steep decline in prices last year during the lockdown, as the Fed has asserted.

But behind the immediate rationale, fast-rising commodity prices, consumer demand and massive spending by the Federal government may be altering the general price structure.

If the basal inflation rate in the US does increase it will undermine the advantage that rising Treasury yields have provided the dollar this year.

American consumer sentiment rose sharply in April. The Conference Board Consumer Confidence Index jumped to 121.7 from 109.0 in March, far ahead of the 113.0 estimate. It was the best reading since February 2020 and the 31.3 increase in the index over two months was the largest in the history of the series which goes back to 1967.

Treasury yields were higher on the week opening at 1.56% on Monday and ending  nine basis points to the good at 1.63% on Friday.

The near symbiotic relationship of the US and Canadian economies puts the loonie in the somewhat unusual position of benefitting from American growth regardless of the state of its own GDP.

American vaccination is far ahead of its northern neighbor. Its economy is quickly being relieved of all remaining pandemic restrictions while Canada still has provinces in partial lockdown. Yet the BOC felt confident enough about economic prospects to reduce its bond commitment by one-quarter while the Fed remains fully involved in the US Treasury market. More than anything else that difference explains the loonie’s rally this week.

Technically, the USD/CAD reentered the pandemic down channel on Monday after trading just above the upper border for most of April. Support levels draw on trading from January 2018 and September 2017 and before that from the middle half of 2015. None of these points can provide appreciable support.

The USD/CAD cannot recover until the fundamental interest rate disparity between the BOC and the Fed changes. With the US economy expected to perform far better this year then the Canadian one, a change in the FOMC assessment is inevitable. The Fed will put forth new economic and rate projections at its next meeting on June 15 and 16. If the outlook for the US economy does not change, it is hard to see how the governors can retain their dour outlook much longer. The Atlanta Fed’s first second quarter estimate for US GDP is 10.4%.

Until the Fed can acknowledge success, the USD/CAD will remain defensive.

The Fed’s pronounced caution put a crimp in the dollar. Otherwise, the stellar US economic performance could have been expected to push Treasury rates and the dollar higher. Fed Chair Jerome Powell’s formulation “substantial further progress” for when the FOMC might consider tapering its bond purchases, gave no indication when or under what economic circumstances the bank might act. Mr. Powell repeated the phrase in response to every question from reporters that sought clarification. From his studied performance, it may be deduced that Mr. Powell, and presumably the governors, feel it necessary to avoid any optimism lest that give the Treasury market a reason to drive rates higher. 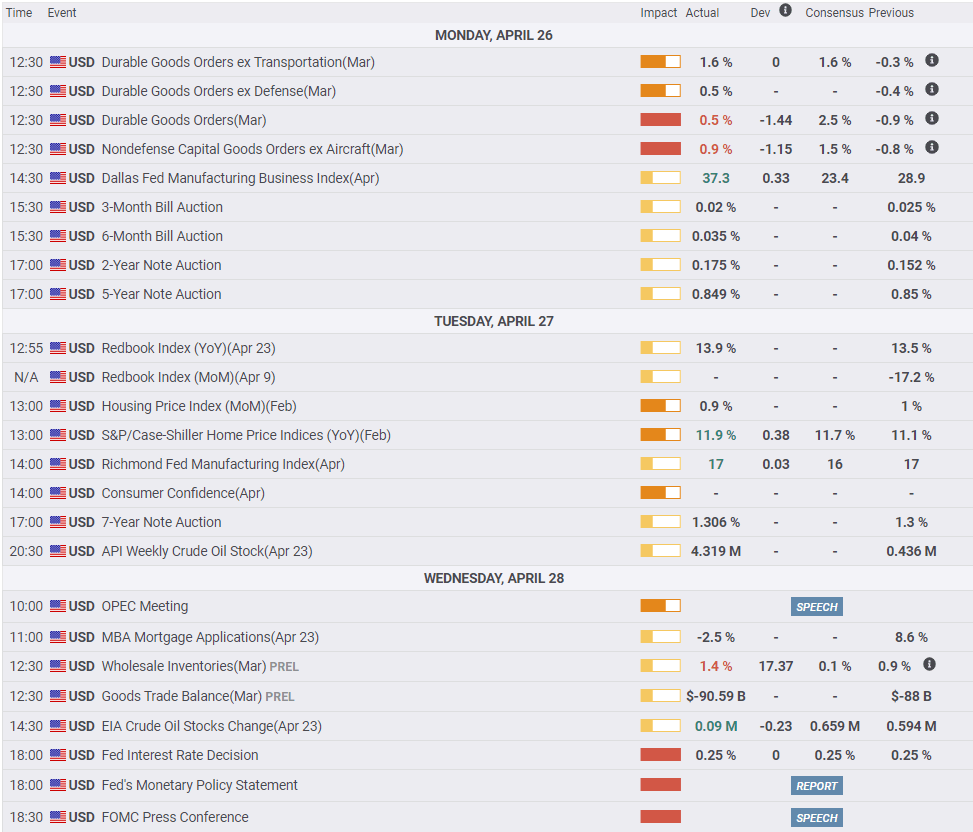 Canada statistics May 3–May 7

The Net Change in Employment on Friday can be expected to give the loonie an additional boost. The Canadian economy has reconstituted about 90% of its employment losses and this report could bring it near to full restitution.

US statistics May 3–May 7

The Institute for Supply Management’s Purchasing Managers’ Indexes for manufacturing and services should confirm the powerful business support for the expansion. Friday’s April payroll report is expected to be another blow-out. 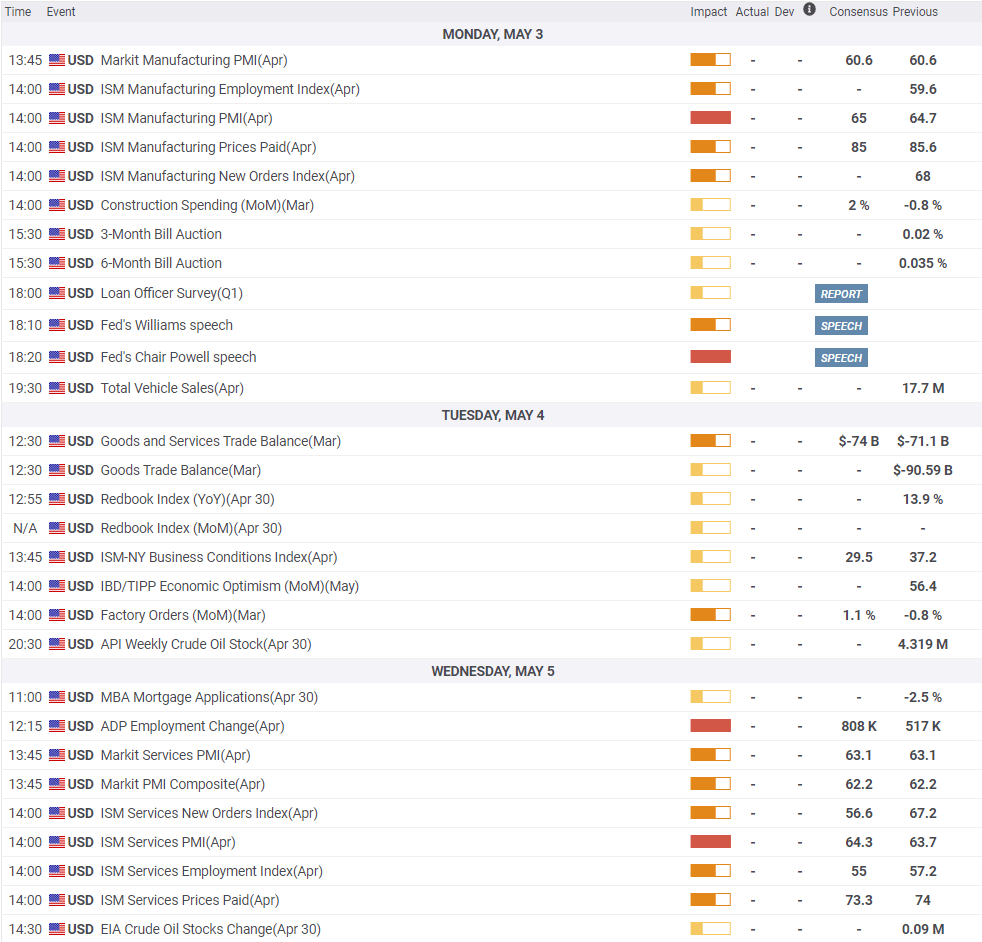 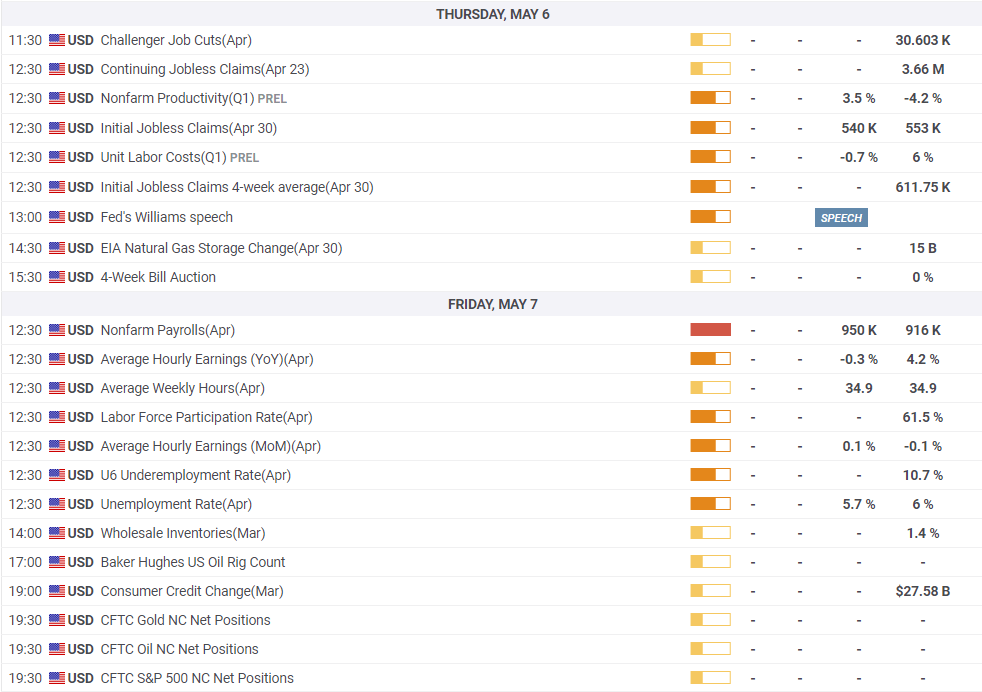 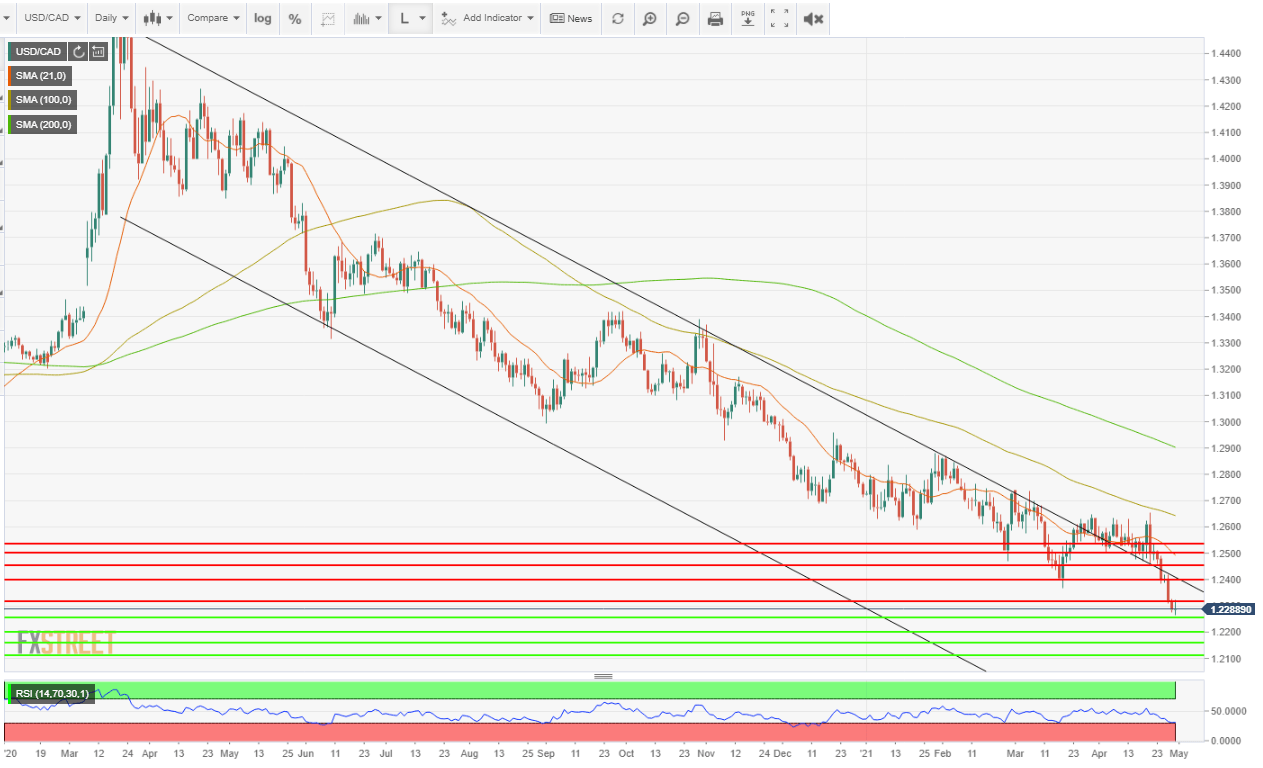 The reentry of the pandemic down channel while dramatic is of minor trading import. The lack of recent support levels, the closest is from February 2018, is of far greater relevance. The rapid drop since 1.2500 was crossed two Fridays ago, 1.74% in five sessions, puts the USD/CAD in position for a profit-taking rebound. The most likely point is from support at 1.2200.

The FXStreet Forecast Poll forsees a substantial bounce beyond the one week horizon. Technically, that is understandable, but any pronounced revival in the USD/CAD probably depends on a change in interest rate fundamentals.

The big story of the past couple of weeks is rising bond yields. Everyone’s talking about it. Everyone’s got a theory about it. Even me. Why are yields rising? What does rising yields mean? But, […]

Fundamental Analysis: Vaccination Program Provides Real Hope for the Future The first quarter of 2021 turned out along the lines of our Q1 report. The British Pound rallied towards GBP/USD 1.4200, slightly higher than our […]

Are European Banks The Value Buy Of The Year?

If there was ever a contest for the most unloved sector in the global economy, European banks would certainly vie for the top spot. Pummeled by years of negative rates, sclerotic growth in the region […]