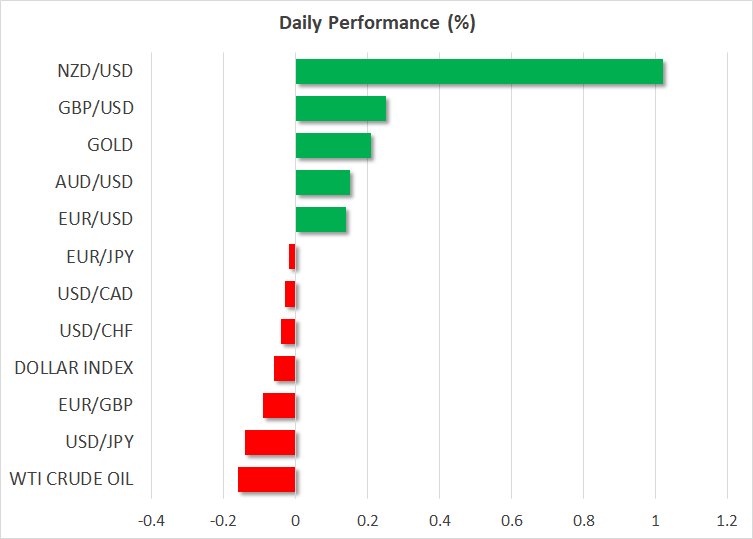 Markets settle down after another CPI shock

Annual inflation in the United States hit a fresh 13-year high of 5.4% in June, surpassing the top estimates and casting doubt on the Fed’s narrative that this inflationary episode will be transitory. Month-on-month, both the headline and core CPI rates jumped by 0.9% – around double the expectations. While most of the evidence suggests the price hikes are still being driven by temporary factors, fuelled by the reopening of the economy such as demand for used vehicles and air travel, there are worries that some of the increases being seen in sectors like food and energy are not necessarily transitory.

Treasury yields on both the short- and long-end of the curve spiked after the data, boosting the US dollar. Although the yield curve initially flattened, as short-term yields rose more steeply, longer-dated yields soon caught up after a Treasury auction for 30-year bonds was met with weak demand.

Investors were likely spooked by the latest inflation data, which hurt sentiment ahead of the auction. However, bond markets are much calmer today, helping FX markets to stabilize as well.

Dollar off highs but euro stays under pressure

The US dollar pared back some of its gains early on Wednesday following yesterday’s CPI-led surge. The is easing after failing to break above last week’s 3-month top of 92.845. Most majors are on a somewhat firmer footing versus the greenback today, but the euro is still looking very wobbly. Euro/dollar seems to have found near-term support at $1.1770. But with the European Central Bank getting ready to adjust its forward guidance, possibly to signal that it will tolerate inflation above 2%, the real test could soon be the $1.17 level, which was the March 31 trough.

The Australian dollar was struggling too after the lockdown in Sydney – Australia’s largest city – was extended by another two weeks. But the pound got a lift from the UK’s own CPI prints out today rising by more than expected, with the 12-month rate hitting 2.5% – the highest since August 2018.

But the winner so far on Wednesday is the New Zealand dollar, which skyrocketed after the Reserve Bank of New Zealand took markets by surprise by announcing an early end to its large scale asset purchase programme. The RBNZ will stop buying bonds on July 23.

The unexpected move prompted investors to price in an earlier rate hike than anticipated heading into the meeting. Markets had already brought forward rate hike expectations to November after the recent upbeat business confidence surveys, but consensus now seems to be forming for the August meeting.

Nevertheless, the kiwi’s 1% gain today would have been much bigger had it not been for USD strength. Even with the RBNZ being on track to become the first major central bank to hike rates in a post-pandemic world, the bullish dollar is making it difficult for the kiwi to secure a grip above the $0.70 handle.

In equity markets, the Dow Jones, S&P 500 and all retreated from intra-day all-time highs after the US inflation data and subsequent rise in yields. But the positive momentum was weak to begin with and impressive earnings from JPMorgan (NYSE:) and Goldman Sachs (NYSE:) didn’t really spark much excitement.

Today’s earnings highlights will come from the Bank of America (NYSE:), Citigroup (NYSE:), Wells Fargo (NYSE:) and Delta Air Lines (NYSE:). Nasdaq futures were last trading in slightly positive territory, with other futures still in the red, along with European indices.

Trading will likely remain subdued until Fed Chair Jerome Powell’s statement before the House Financial Services Committee in Congress for his semi-annual testimony. Powell will probably steer clear of flagging any timeline around tapering but undoubtedly, he will be quizzed about the latest inflation surge by lawmakers.

It might be a bit more difficult this time for Powell to tread as carefully around the inflation being transitory narrative. But in a worst case scenario, risk assets might be able to find some support from progress in infrastructure talks after Senate Democrats reached a deal on a $3.5 trillion investment plan that will likely be passed using the budget reconciliation process.

Finally, the Bank of Canada will also be in focus today, amid expectations that it will taper its own asset purchase programme as well.

Dollar Doesn’t Dare To Breakthrough Without A Signal From Fed

Inflation in the US continues to go off the charts. Such a sharp rise reinforces the importance of action by the Fed and other policymakers, causing markets to wait tensely for their comments and hints […]