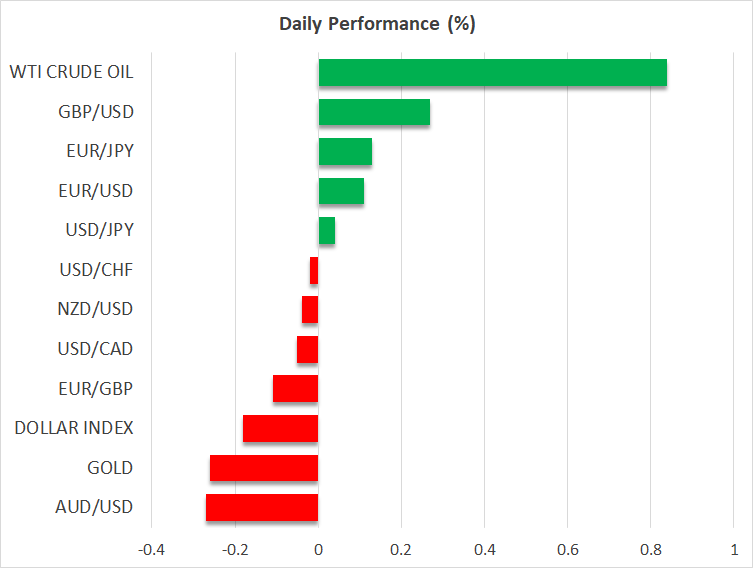 US inflation to set the tone

With the Fed having almost locked in a November taper announcement, the question now is whether Chairman Powell will use next week’s policy meeting to give the markets an early warning. The answer might boil down to what the upcoming inflation report shows.

Forecasts suggest both the headline and core CPI rates inched down slightly in August to reach 5.3% and 4.2% respectively on a yearly basis. The risks surrounding these forecasts seem balanced, as producer prices accelerated further during the month and the Markit PMIs pointed to intensifying supply chain issues, but the ISM surveys signaled a cooling in business costs.

The main variable for the Fed will be whether inflationary pressures remain concentrated in a handful of reopening-linked sectors or whether they have started to broaden out. Any signs that price pressures are becoming more entrenched would likely boost the dollar as traders bring forward the Fed’s normalization timeline, but hit dollar-denominated assets like gold.

Of course, this will only affect short-term trading. Ultimately, it doesn’t matter much whether the Fed will push the taper button in September, November, or even December. It’s only a matter of time. The crucial part for FX markets is whether interest rates will be raised next year, which seems realistic in an environment of stickier inflation, especially if Congress makes good on its spending promises.

US equities had a mixed performance on Monday. The Dow Jones rose 0.8% but the tech-heavy Nasdaq closed marginally lower as value plays outperformed growth. The S&P 500 was somewhere in the middle, advancing by 0.2%. Stocks with high growth potential have outperformed cheaper value names for a decade now thanks to low interest rates, to the point where the relative performance gap between the two has reached new extremes lately.

This is typically a harbinger of a sector rotation towards value plays, particularly in a market with already-stretched valuations and with several risks looming, such as a withdrawal of cheap liquidity and higher taxes for corporations. Value tends to weather any corrective storms much better.

In the commodity arena, oil prices are trading at six-week highs after hurricane Nicholas made landfall on the Texas Gulf Coast, threatening to throw drilling sites and refineries that are still reeling from hurricane Ida into more disarray. Natural disasters rarely have a lasting impact on oil prices, but when you chain two of them together at one of the world’s most important production hubs, it’s another story.

In the FX spectrum, things are relatively quiet. The US dollar surrendered its recent gains as the mood in equity markets improved and is currently on the back foot. Its short-term fate is entirely at the hands of today’s inflation numbers.

Meanwhile, the British pound is on the offensive after some encouraging jobs numbers. The unemployment rate fell to 4.6% and while wage growth cooled a little, it remains quite elevated, keeping real wages comfortably positive. There’s a risk of a spike in unemployment now that the furlough program is being tapered, but the record number of job openings in the economy suggests any such spike won’t last long.

Finally, the Australian dollar is under fire today after RBA Governor Lowe reaffirmed his central bank won’t raise rates until 2024 and questioned why markets are even pricing in rate hikes before that. Another source of worry is how China’s Evegrande debacle will play and how serious contagion risks are in case it defaults.

Fundamental Forecast for the US Dollar: Neutral The US Dollar (via the DXY Index) has dropped back as the calendar moved into mid-July on the back of declining Fed rate hike expectations and collapsing US […]

EUR/USD Rate Talking Points EUR/USD trades to a fresh monthly low (1.1672) as it carves a fresh series of lower highs and lows, but the exchange rate may continue to defend the yearly low (1.1664) […]

It was a wild week in financial markets. Stocks got smoked while the dollar clawed back some ground as inflation finally showed its teeth, reigniting worries about higher interest rates being on the horizon. The […]