The upcoming first-quarter economic report for the US is expected to post a strong acceleration in growth, according to a set of nowcasts. The projected gain in gross domestic product GDP has been steady recently, suggesting a relatively high reliability that the Apr. 29 release from the Bureau of Economic Analysis will reflect a faster expansion in Q1 vs. the previous quarter.

US output in the first three months of 2021 is projected to rise 6.0% (real annual rate), based on the median nowcast for several estimates compiled by CapitalSpectator.com. That’s roughly in line with the previous estimate in mid-March. The forecast represents a substantially faster pace vs. the 4.3% increase reported for last year’s Q4. 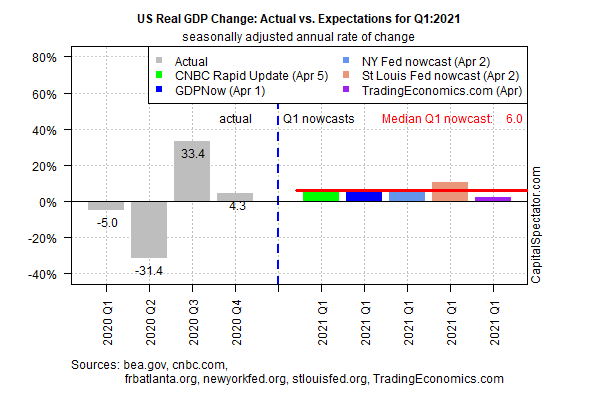 Firmer growth expectations for the US and the global economy are also highlighted in this week’s revised forecasts from The International Monetary Fund. The projects that US economic output for all of 2021 will expand 6.0%, up from January’s 5.5% estimate.

“Among advanced economies, the United States is expected to surpass its pre-COVID GDP level this year, while many others in the group will return to their pre-COVID levels only in 2022,” predicts IMF chief economist Gita Gopinath.

Survey-based data also reflect a firmer outlook for the US economy. This week’s update of the IHS Markit US PMI, a GDP proxy, reports that economic activity in March posted “the fastest upturn in private sector business activity since August 2014.” 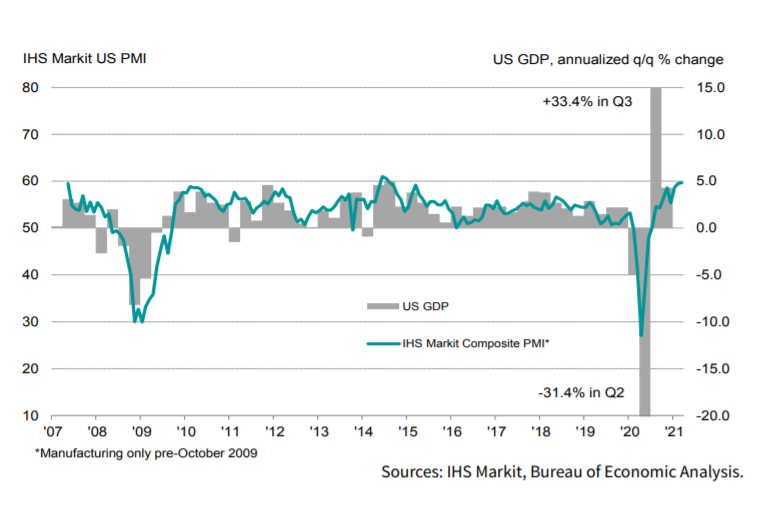 “the recent surge in service sector growth shows no sign of abating, with another impressive performance in March rounding off a quarter in which the PMI surveys indicate that the economy grew at an annualized rate of approximately 5%.”

A key driver of the improved US outlook is the Biden administration’s recently enacted $1.9 trillion stimulus package. The new phase of government spending “is expected to deliver a strong boost to growth in the United States in 2021 and provide sizable positive spillovers to trading partners,” the IMF wrote in this week’s update of the World Economic Outlook.

Australian Dollar Talking Points AUD/USD consolidates ahead of Australia’s Gross Domestic Product (GDP) report as the data is expected to confirm the first recession in nearly 30 years, but key market trends may keep the […]

Crude Oil, Gold Prices at the Mercy of Risk Trends Ahead of US GDP Data

Bitcoin price today broke out of its long consolidation phase between $58K- $60K to register a new monthly high of $61,276. The price has retraced back to $60,300 at the time of writing as funding […]