EU shares closed in negative waters yesterday, but Wall Street and Asian shares rebounded, perhaps as there was evidence that the acceleration in US inflation may have been due to transitory factors. We also had an ECB , with the Bank saying that it will continue its PEPP purchases at a significant higher pace, confirming expectations over a dovish stance.

Transitory Factors Behind Surge In US Inflation

The traded lower against all of its major peers on Thursday and during the Asian session Friday. It lost the most ground versus , , , and in that order. 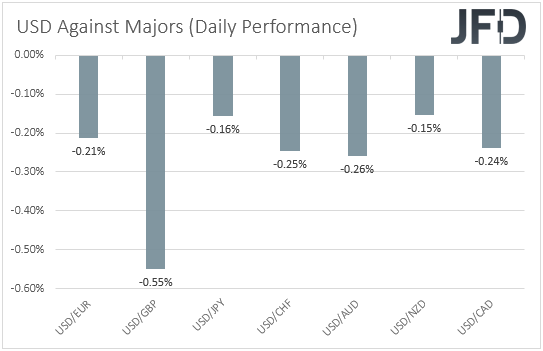 The weakening of the US dollar, combined with the strengthening of the risk-linked Aussie and Loonie, suggests that markets traded in a risk-on fashion yesterday and today in Asia. However, the fact that the Swiss franc was also among the main gainers points otherwise. Thus, in order to get a clearer picture with regards to the broader market sentiment, we prefer to turn our gaze to the equity world. There, all but one of the major EU indices closed in the red, with the only exception being UK’s , which gained 0.10%. Nonetheless, Wall Street edged north, with the hitting a fresh record high. Appetite remained upbeat during the Asian session today as well. The only exception was China’s . 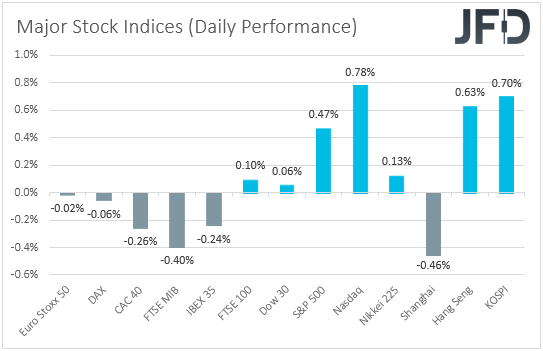 Although this could have added to speculation that the Fed may start to withdraw monetary policy support sooner than previously thought, looking at the details of the report, market participants saw that there were hefty contributions to that from short-term increases in airline ticket prices and used cars, which supports the fact that the latest inflation spike may indeed be due to transitory factors. That may be the reason why stock markets rebounded in the aftermath of the report. 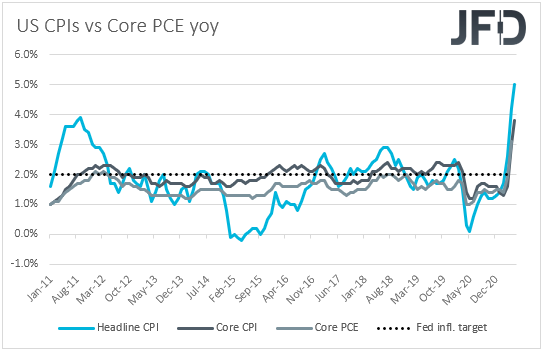 However, with underlying inflation also climbing further above the Fed’s target of 2%, and also taking into account that several Committee members expressed the desire to start discussing QE tapering at the upcoming meetings, we still see this with a degree of cautiousness. Before we get confident on where financial markets may be headed next, we prefer to wait for the outcome of next week’s FOMC .

Even though there is decent level of expectations over some tapering talk, a lot may depend on the potential indicative pace. A fast pace of monetary policy withdrawal may suggest that Fed officials do not see the surge in inflation as transitory as they did in the past and may hurt equities. At the same time, the US dollar and other safe havens could come under some buying interest.

On the other hand, any discussion suggesting that the time for scaling back monetary policy has not come yet, or anything pointing to a very slow pace of tightening, may encourage market participants to increase their risk exposure a bit more. Obviously, upcoming inflation data may also play a big role on how the Fed will continue moving forward.

After a strong reversal to the upside on June 4, AUD/USD is now seen trading above a short-term tentative upside support line taken from the low of June 3. At the same time, the pair is still sitting slightly below a short-term downside resistance line drawn from the high of May 18. For now, we will take a neutral approach and wait for a violation of one of those lines, before examining the next short-term directional move.

If the bulls are able to break the aforementioned downside line and push the rate through the 0.7763 barrier, marked by yesterday’s high, that might invite even more bulls into the field. AUD/USD could get lifted to the 0.7773 obstacle, or to the 0.7796 zone, marked by the high of May 26, where a temporary hold-up may occur. That said, if the bulls are still feeling active, they might continue to apply pressure and aim for the next possible resistance area, at 0.7813, marked by the high of May 18.

Alternatively, if the rate falls below the previously mentioned upside line and drops below the 0.7717 hurdle, marked by yesterday’s low, that might spook some buyers from the arena. More sellers could join in and take AUD/USD to the psychological 0.7700 zone, or the 0.7671 area, marked by an intraday swing high of June 4. The pair may get a temporary hold-up around there, however, if the selling continues, the next potential target might be at 0.7645, which is the current lowest point of June.

ECB To Accelerate Its Pandemic-Related Purchases

Now, apart from the US CPIs, we also had an ECB monetary policy yesterday. The Bank decided to keep all its monetary policy settings unchanged, noting that its PEPP (Pandemic Emergency Purchase Programme) will continue to run at a “significant higher pace”. The Bank raised its 2021 and 2022 GDP and inflation forecasts, but at the press conference following the decision, ECB President clarified that headline inflation will remain below target over the forecast horizon.

She admitted that they were somewhat more optimistic about the economic outlook than three months ago, but highlighted that the decision statement was unanimously supported, suggesting that tapering is not on any official’s mind at the moment. Having said all that though, the euro did not fall on the ECB’s dovish stance, perhaps as this was the outcome the majority of market participants may have been expecting.

From around mid-May, has been moving sideways, but at the same time, the pair is trading below a short-term downside line taken from the high of Apr. 30. For now, it seems that there is a greater chance of seeing a move lower, as our oscillators are indicating negative price momentum. However, in order to get comfortable with lower areas, we would prefer to wait for a break below the support area between the 0.8560 and 0.8565 levels, marked by the lows of May 12 and June 4 respectively.

If the above-discussed break happens, this would confirm a forthcoming lower low and might open the door for a move to the 0.8533 territory, marked by the inside swing high of April 1, where the rate may stall temporarily. That said, if the bears remain behind the steering wheel, they could send EUR/GBP to the psychological 0.8500 hurdle, which marks the lowest point of April.

In order to shift our attention to some higher areas, we would prefer to wait for violation of the aforementioned downside line and for a rate-rise above the resistance area between the 0.8642 and 0.8645 levels, which are marked near the highs of June 10 and 1 respectively. A break through that area may invite more buyers into the game, possibly sending the pair towards its next resistance zone, at 0.8671, which is the high of May 25. If that zone is just seen by the bulls as a temporary obstacle on the way higher, a break of it could push EUR/GBP to the 0.8700 level, marked by the high of May 7.

As For Today’s Events

During the early European morning, we already got the UK monthly for April, as well as the and production rates for the month. GDP accelerated to +2.3% mom from +2.1%, but the IP and MP rates missed their forecasts. In any case, the pound barely reacted on the release.

Later in the day, the only other data point worth mentioning is the preliminary index for June, which is expected to have inched up to 84.0 from 82.9.

We also have a speaker on today’s agenda and this is BoE Governor Andrew Bailey.

In this article, we’ll explore CPI and forex trading, looking at what traders should know about the Consumer Price Index to make informed decisions. We’ll cover what CPI is as a concept, the CPI release […]

Powell’s speech yesterday and the FOMC’s official post-meeting commentary suppressed speculations of early QE tapering and rate hikes. The Fed chairman on fragile economic recovery and reiterated the transitional nature of rising inflation based on […]