Following remarks by several Fed officials that they still expect to start scaling back their QE purchases later this year, market participants may now lock their gaze on the US CPIs for August, scheduled for later today.  Expectations are for both the headline and core rates to have ticked down, something that could add credence to the tapering case.

Tomorrow, during the early EU session, we get inflation numbers from the UK, with both rates expected to have risen, and thereby, add to chances over a rate hike by the BoE soon.

US CPIs Under The Limelight Today, UK Inflation Numbers Tomorrow

The traded mixed against the other major currencies on Monday and during the Asian session Tuesday. It gained against , , and , in that order, while it underperformed versus , , , and . 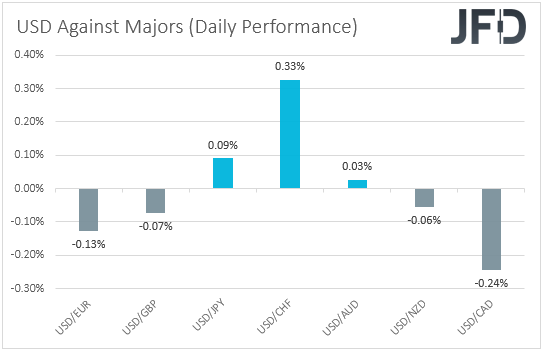 The weakening of the safe-havens franc and yen, combined with the strengthening of the risk-linked loonie and kiwi, suggests that markets may have traded in a risk-on fashion yesterday and today in Asia. Indeed, turning our gaze to the equity world, we see that EU shares were a sea of green, with the positive appetite, although somewhat softer, rolling into the US session.

Both the and the inched up, while closed fractionally lower. Today in Asia, Japan’s and South Korea’s traded north, while China’s and Hong Kong’s tumbled, perhaps due to China’s tightening grip on tech firms, and after the nation’s most-indebted developer, Evergrande Group (OTC:), warned of growing default risks. 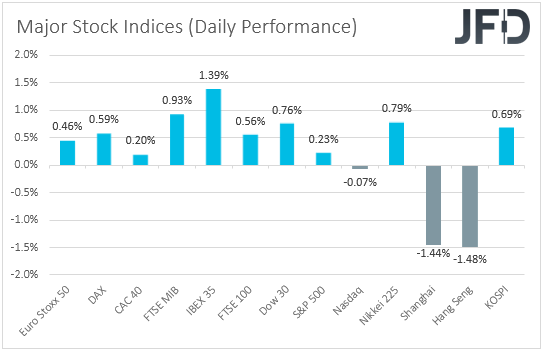 With no clear catalyst behind the rebound in equities, we would assume that it may be the result of short covering following last week’s slide on remarks by several Fed officials that they still expect to begin trimming their QE purchases before the end of the year, despite the slowdown in jobs growth seen in August.

Today, market participants looking to form a clearer opinion on the matter are likely to lock their gaze on the US CPIs for August. Both the headline and core rates are expected to have ticked down to +5.3% and +4.2% , from +5.4% and +4.3% respectively.

Despite the potential slowdowns, both rates are expected to have stayed well above the Fed’s objective of 2%, which could add to questions as to whether the latest surge in inflation is transitory or not. Therefore, market participants could increase bets over a first tapering step later this year, which could support the US dollar and perhaps result in another correction in equities.

During the early EU session though, we already got the UK employment data for July. The ticked down to 4.6% from 4.7% as was widely expected, while the net change in employment revealed that the economy has added 183k jobs in the three months to July, more than the 95k in the three months to June. What’s more, average weekly earnings, both and bonuses, slowed to the already expected rate.

Tomorrow, at the same time we get the nation’s inflation data for the month of August, with expectations pointing to strong accelerations in both headline and core terms. Specifically, both the and rates are forecast to have jumped to +2.9% yoy, from +2.0% and +1.9% respectively.

At its latest gathering, the BoE lowered the threshold of when they will start reducing their stock of bonds. Specifically, they said that they will do so when the policy rate hits +0.50%, by not reinvesting the proceeds of maturing debt. The previous guidance was for the Bank to not start unwinding its bond purchases until interest rates were near +1.5%.

In our view, this means that QE tapering may start earlier than previously anticipated. Now, the big question is when the time would be appropriate for officials to start raising interest rates. Last week, BoE Governor Andrew Bailey revealed that, even at the prior gathering, policymakers were split evenly between those who felt the minimum conditions for raising interest rates were met and those who believed that the recovery was not strong enough.

This suggests that a rate hike could take place sooner than many may have been anticipating, and the better-than-expected employment report, combined with accelerating inflation tomorrow, and a rebound in on Friday, could allow GBP-traders to increase their hike bets and push the pound higher this week, especially against currencies the central banks of which are expected to keep interest rates at low levels for much longer, like the , the yen and the .

traded in a consolidative manner yesterday, staying between the support of 0.7340 and the resistance of 0.7375. However, overall, the pair continues to trade below the upside support line drawn from the low of Aug. 20, as well as below the longer-term downside resistance line taken from the high of May 10. In our view, these technical signs keep the short-term outlook negative.

A clear and decisive dip below 0.7340 would confirm a forthcoming lower low on the 4-hour chart and may initially pave the way towards the 0.7285 territory, which provided support on Aug. 30 and 31. If the bears are not willing to stop there, then we could see them aiming for the 0.7235 territory, the break of which could see scope for extensions towards the inside swing high of Aug. 20, at 0.7155.

On the upside, we would like to see a recovery back above 0.7477 before we start examining the bullish case. This will confirm a forthcoming higher high and could aim for the 0.7503 or 0.7535 zones, marked by the highs of July 13 and July 7, respectively. Now, if neither barrier is able to stop the bulls, then we could see them climbing towards the 0.7597 level, marked by the high of July 6. Another break, above 0.7597, could allow extensions towards the peak of June 17, at 0.7645.

traded higher yesterday, after it hit support at 151.90, and now looks to be headed towards the 152.65 barrier, marked by Friday’s high. Overall, the pair continues to trade above the upside support line drawn from the low of Aug. 24, and thus, we would consider the short-term picture to be positive.

A break above 152.65 would confirm a forthcoming higher high on the 4-hour chart, a move that could set the stage for advances towards the 153.30 territory, which provided strong resistance between July 14 and Aug. 11. That said, if the bulls are willing to climb above that zone this time around, we could see the trend extending towards the 154.07 hurdle, defined by the high of July 6.

The only other items on today’s agenda worth mentioning are the US index for August, and Canada’s for July. However, neither release has been proven a major market mover in the past.

As for tonight, during the Asian session Wednesday, we have China’s , , and , all for August. All three of the yoy rates are expected to have declined notably, but yet to have stayed at historically decent levels. Therefore, we don’t expect such numbers to trigger serious concerns with regards to the performance of the world’s second largest economy.

Yes, economic momentum has weakened recently due to the outbreak of the Delta coronavirus variant, but last week, data showed that the nation’s grew faster than expected during the month of August due to solid global demand, suggesting that, despite some domestic headwinds, the Chinese economy may receive fuel and support from the rest of the world.

As for the speakers, we have two on today’s agenda and those are ECB Governing Council member Jens Weidmann and ECB Supervisory Board member .

Without any central bank meetings on the agenda next week, the spotlight will fall on the latest edition of US inflation and retail sales. The chances of a Fed taper announcement this month have fallen […]

Global equities traded higher yesterday and today in Asia, ahead of the US CPIs for June, which may well affect expectations over the Fed’s future course of action. Accelerating underlying inflation may bring hike bets […]

Investors kicked off the week with renewed demand for US assets. The rallied for the fifth straight trading day while the strengthened versus the , and . Treasury yields also hit 1.5% intraday, which kept […]