The topic of a minimum tax rate on corporate income is developing rapidly and gaining recognition. Brought up for discussion only earlier this week by Treasury Secretary Janet Yellen, the idea found a quick response from German and French policymakers, the IMF and World Bank officials.

The proposal fits into the global trend towards de-offshoring and pressure on tax havens gaining momentum in recent years. European officials even expressed confidence that such a rate could be introduced with incredible speed for bureaucrats—by the middle of this year.

Let’s try to assess this initiative from the perspective of its impact on financial markets.

America is proposing this idea because it is on the way to activating substantial tax raises to pay for economic relief packages already introduced and further initiatives.

But all of this would create a wave of companies leaving for other jurisdictions with lower taxes. That is, capital flows would run the risk of passing the US, which is bad news for financial markets.

It is easy to see that Trump’s tax reform has stimulated accelerated growth in US stock markets compared to Europe and Japan. Moreover, over the past 50 years, the US has systematically lowered corporate taxes (or raised them less than others). This clearly demonstrates the advantages of the US markets and why so many global corporations have grown in the US.

Capital inflows to the US stock markets in the two years from 2018 also supported the dollar’s strengthening during this period.

The tax hikes will shift the balance sheet outside the US, creating a more attractive investment environment in other countries. 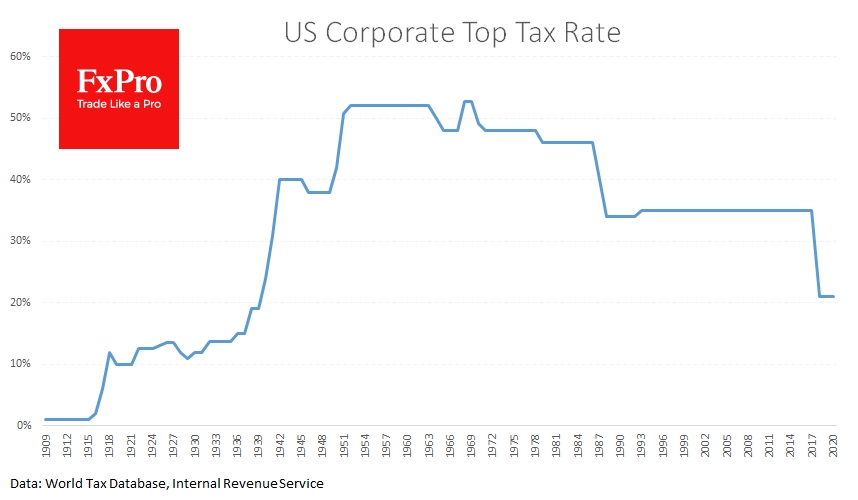 Over the past 50 years, the US has systematically lowered corporate taxes

The internationally agreed tax increase promises to be a whirlwind for stock markets, as a higher share of capital will now be distributed by governments rather than millions of businesses. This will leave companies with less money to buy back shares, dividends and investments.

However, these tax hikes do not pose a threat to the bullish trend as a whole, promising only to slow its momentum.

For the FX market, the introduction of a global minimum tax rate could restrain the weakening of the dollar, part of which has been linked to forecasts of a worsening tax regime.

The trading volumes remained low during the weekend once again, but bitcoin jumped by more than $1,000 in a day to a high of around $34,700. The alternative coins have also bounced off and reclaimed […]

The Value of Everything: Making and Taking in the Global Economy

Price: Modern economies reward activities that extract value rather than create it. This must change to ensure a capitalism that works for us all. Shortlisted for the FT & McKinsey Business Book of the Year […]