The outperformed all but one of the other major currencies yesterday and today in Asia, perhaps due to data revealing that US inflation continued to surge in June. In New Zealand, the appeared more hawkish than expected, sending the sharply higher. Today, investors are likely focus on Fed Chair Powell’s testimony before Congress, as well as on the monetary policy decision.

US Dollar Rallies, Equities Pull Back On Rising US CPIs, Powell Appears Before Congress

The US dollar traded higher against all but one of the other major currencies on Tuesday and during the Asian morning Wednesday. It lost ground only against NZD, while it gained the most versus , , and . The greenback eked out the least gains versus . 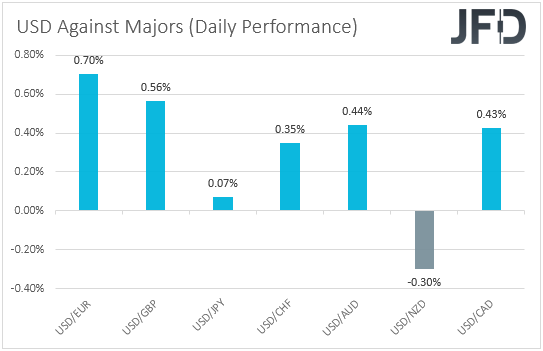 The strengthening of the US dollar and the Japanese yen, combined with the weakening of the risk-linked , suggests that markets turned to risk-off at some point yesterday or today in Asia. The Kiwi’s rally points otherwise, but we already know that this was the result of the RBNZ decision overnight rather than the broader market sentiment. Looking at the performance in the equity world, we see that indeed, sentiment was soft during the EU trading, and deteriorated even further during the US and Asian sessions, despite the and hitting fresh records in early trading. 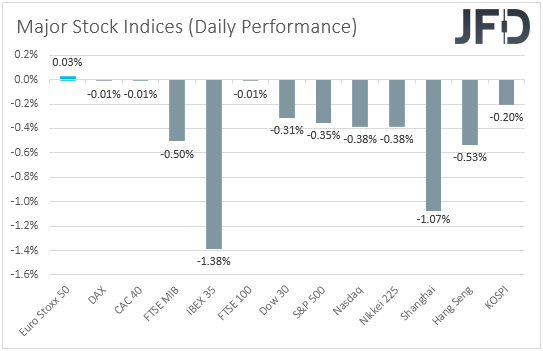 In our view, this was due to the US CPIs accelerating by more than anticipated, with the rate rising to a 13-year high and the one hitting its highest level since November 1991. This may have added to concerns that the inflation spike may eventually not be due to transitory factors and prompted market participants to bring forth their bets over when the Fed may start raising interest rates. Ahead of the CPIs, expectations were for the Committee to push the hike button in March 2023, but now, such a move is nearly fully priced in for January 2023. 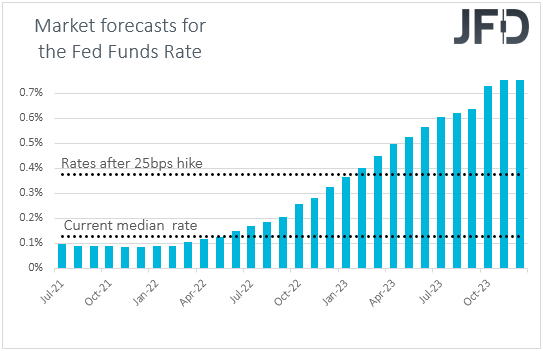 Today, investors are likely to lock their gaze on Fed Chair Jerome Powell’s testimony to Congress on the state of the US economy. They may be eager to find out whether their pricing is correct or not. Although we know from the latest “dot plot” that the consensus among officials is for rates to start rising in 2023, market participants may be looking for clues as to when this could happen as early as in January, as their bets suggest.

Another point of interest may be any clues and hints over when policymakers are planning to start reducing their bond purchases. With the minutes of the last gathering emphasizing on a divided Committee, Powell may provide more clarity on where the majority stands. In case we get remarks suggesting that this could happen in the next few months, the US dollar is likely to continue to drift north, while equities may correct a bit lower. However, as we already noted yesterday and on Monday, stock-market investors may also keep an eye on second-quarter earnings, and thus, we would treat any further decline in stock indices during Powell’s speech as a corrective setback. Solid earnings may encourage participants to take advantage of any potential setback and push stock prices up again.

The S&P 500 cash index traded lower yesterday, after hitting a fresh record high at 4392.10. That said, the price remains above the upside support line drawn from the low of June 21, and thus, we would still consider the short-term picture somewhat positive, even if there is room for some further correction.

Yes, the index may continue drifting south for a while more, especially if Powell appears hawkish when he testifies before Congress later in the day. However, market participants may jump into the index near the aforementioned upside line and aim for another test near the record of 4392.10, or the psychological round figure of 4400. If they don’t stop there, then we could see them climbing towards the 4450 territory.

On the downside, we would like to see a dip below 4330 before we abandon the bullish case. This may also confirm the break below the upside line drawn from the low of June 21, and perhaps allow declines towards the 4290 territory, near the low of July 8.Another break, below 4290, could extend the slide towards the 4260 barrier, which is slightly below the low of June 25, and fractionally above the inside swing high of June 23.

Now, flying form the US to New Zealand, overnight we had an RBNZ monetary policy decision. The Bank kept interest rates unchanged at +0.25%, and although we have been expecting an optimistic language, the statement was even more hawkish than what we (and apparently many other market participant) have been anticipating. Officials announced that they will end their Large-Scale Asset Purchase (LSAP) program from next week. This sent the Kiwi sharply higher, taking it to the first place on the performance table of the major currencies. 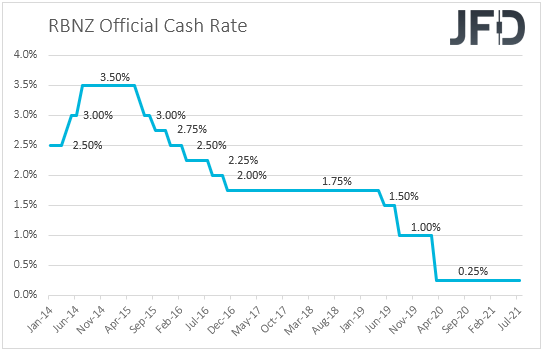 Now, bearing in mind that expectations around the Fed’s future plans may keep any future Kiwi gains limited against the US dollar, we prefer to exploit such gains against the Aussie. First of all, any impact due to the broader market sentiment will be offset, as both currencies are affected the same way.

Second, last week, the RBA announced that it will proceed with more bond purchases, beyond September, which could keep the Aussie in a more vulnerable position than the Kiwi. Long story short, we do expect to continue drifting south for a while more.

Later in the day, the central bank torch will be passed to the BoC. When they last met, policymakers of this Bank kept their monetary policy settings unchanged but noted that any adjustments to the pace of their QE purchases will be guided by the ongoing assessment of the strength and durability of the economic recovery. In our view, the absence of strong hints with regards to further tapering in the upcoming months may have disappointed some traders, and that’s why the currency traded lower after the decision. 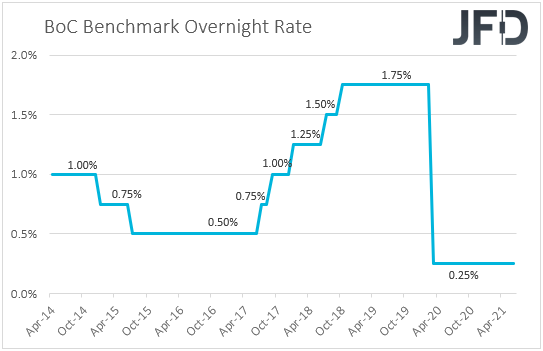 However, since then, both the and CPIs accelerated by more than anticipated, while the showed that the Canadian economy added more jobs than expected in June. What’s more important though is that the Bank’s latest Business Outlook Survey indicator rose to a record high, due to a fast vaccination pace and the easing of some covid-related restrictions. In our view, this may allow the Bank to scale back its QE further at this gathering, which, combined with upbeat signals that more tapering is in the works for the months to come, could support the Canadian dollar. Again, we would choose as a counterpart the Aussie, which we expect to have a poorer performance due to a dovish RBA.

traded lower yesterday, after hitting resistance near 0.9355. Overall though, the pair has been trading in a trendless mode, between 0.9255 and 0.9390 since May 20, and thus, we will take a neutral stance for now. We prefer to wait for the pair to exit the range before we get confident on the next direction.

With the fundamentals favoring the Canadian dollar, we would see more chances for the pair to exit the range through its lower bound, at 0.9255. This will confirm a forthcoming lower low on the daily chart and may pave the way toward the 0.9200 territory, marked by the inside swing high of May 26, 2020. If that barrier is not able to halt the slide, then we will consider as the next possible resistance, the 0.9130 level, marked by the low of May 29, 2020.

Now, in case we do see a strong recovery and the rate exiting the sideways range through its upper bound, at 0.9390, we would start examining the bullish case. The buyers may then get encouraged to push the action towards the peak of May 14, at 0.9430, the break of which could trigger extensions towards the 0.9470 area, marked by the inside swing lows of May 10 and 11. The next resistance may be the psychological figure of 0.9500, which is very close to the high of May 11.

During the early EU session, we already got the UK CPIs for June. Both the and rates rose more than expected, but the pound gained only somewhat, perhaps because, at its latest , the BoE insisted that the spike in inflation is likely to prove to be transitory and added that they do not want to undermine the recovery by premature tightening.

A few hours later, we have Eurozone’s for May, while during the US session, the US s for June are coming out. Eurozone’s industrial production is expected to have weakened 0.1% mom after improving 0.8% in April, while both the headline and US PPI rates are expected to have risen further.

On Thursday, during the Asian session, the main items on the agenda may be Australia’s report for June, as well as China’s for Q2, which will be accompanied by the , , and , all for June. In Australia, the is forecast to have ticked down to 5.0% from 5.1%, but the net change in employment is expected to show that the economy has gained less jobs than in May. Specifically, it is expected to show a 30.0k jobs gain following 115.2k new jobs in May. 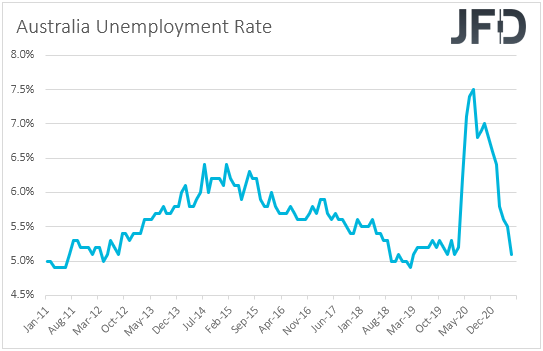 With the RBA still wearing its dovish dress, we don’t believe that the anticipated slide in the unemployment rate will be enough to spark speculation that Australian policymakers will turn in the direction of the more hawkish Fed, RBNZ and BoC in the months to come, especially with the employment growth slowing down.

As for the Chinese data, the GDP is expected to have accelerated to +1.3% qoq from +0.6%, while fixed asset investment is anticipated to have slowed to +12.5% yoy from 15.4%. Industrial production and retail sales are expected to have slowed as well, to +7.9% yoy and +11.0% yoy from +8.8% and +12.4% respectively. In our view, despite expectations of some slowdown during the last month of the quarter, it seems that the world’s second largest economy has performed very well during the whole period and thus, we don’t expect this data series to have a major impact on investors’ morale.

by Adam Button As the focus broadens on in the developed markets space, some Emerging Market nations are already tightening. Rate decisions from the central banks of the and highlighted the ongoing debate on inflation […]

Analysts predicted two scenarios of the ’s response to the policy decisions. The euro could have either spiked or slumped. In practice, neither happened and the market got stuck in a trading range. The thing […]