Polls dismissed then-candidate Donald Trump in 2016, and are off the mark also in 2020 – that is the common response to the president’s trailing in the polls. One such example is here Handicapping the Presidential Race.

History may rhyme, but not this time. Here is why.

Back in 2016, final national opinion polls showed Democratic candidate Hillary Clinton leading Trump by around 5% nationally in the final days before the vote. The actual result was a 2% gap in favor of the former First Lady – within the margin of error.

Around 20% of the electorate disliked both candidates, with 45% of them opting from Trump and only 30% for Clinton. James Comey, the Director of the FBI, announced he is reopening an investigation into the former Secretary of State’s emails ten days before the vote – potentially making the difference.

Polls in battleground states failed to capture the break toward Trump in the last days of the race and also the enthusiasm toward him among non-college-educated whites. That was enough to win Pennsylvania, Michigan, and Wisconsin by less than 1%, and Florida by 1.2% – clinching an electoral college victory despite losing the popular votes.

Seven reasons why 2020 is different

1) Bigger gap: According to the RealClearPolitics, former Vice-President Joe Biden leads the president by 9% nationally and has consistently had a larger lead than Clinton’s. The gap stands at 3.4% as of mid-October.

2) Fewer undecideds: Back in 2016, support for Clinton peaked below 47%. This time, backing for Biden has been above 50% with fewer undecideds. There are fewer people that could break toward Trump. Biden – which has positive favorability ratings – enjoys 51.3% support at the time of writing.

3) Poll mistakes go both ways: It is easier to compare to 2016, when the president shocked the world with a victory but looking back into history shows that surveys can miss in both directions. Back in 2012, surveys underestimated President Barack Obama by around 4% on the national levels, and state polls missed Democratic support as well. Accounting for a 2012-style miss, Biden has an even larger advantage.

4) Pollsters have learned: Firms that survey public opinion need to defend their reputation toward the next elections and to rake in income from commercial firms. They would not want to repeat the exact same mistakes – and may even overcompensate and underestimate a potential Biden landslide.

Education is better factored in surveys, which try to correctly account for the share of people that do not hold a college degree in the vote. Similarly, in 2020, there are more frequent high-quality polls in battleground states.

Both FiveThirtyEight and The Economist view of Pennsylvania as the tipping point state. The table below shows intense surveys of the Keystone State. The same goes for other swing states.

5) Gap between states and national vote smaller this time: Not even the most ardent Trump backers believe he can win the popular vote, but build their hopes on an electoral college victory. And while the aforementioned Keystone State shows a smaller projected gap against Trump – 6.3% according to FiveThirtyEight – it is beyond the margin of error.

Biden’s lead is even more solid in Nevada, Wisconsin, Michigan, and Minnesota. Moreover, the challenger is ahead of the incumbent in several additional states such as Florida, Arizona, and North Carolina. If he wins them, it would be a landslide. 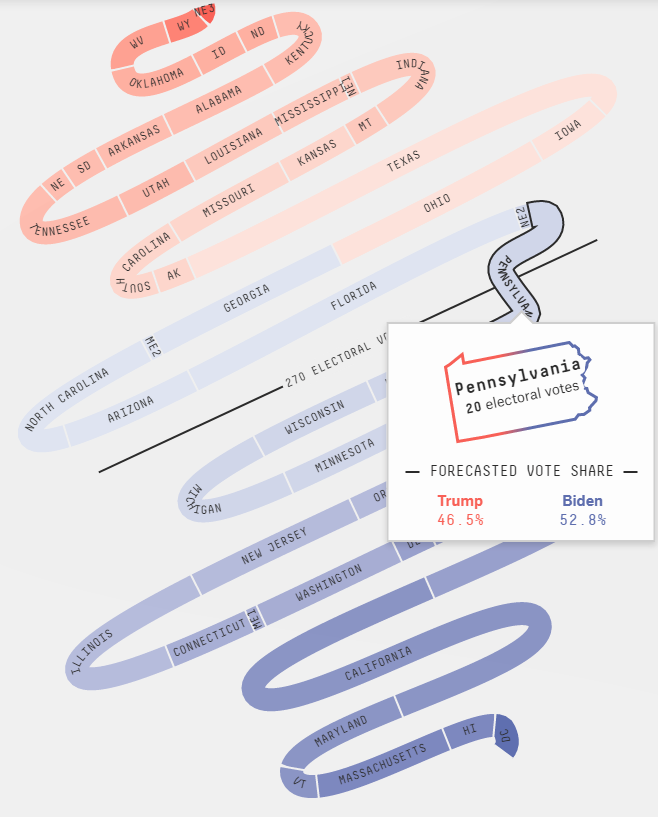 6) No shy Trump voters: With a substantial robust – and growing – advantage in the polls, some assume that those that are surveyed are lying to pollsters or are ashamed to say they support Trump. First, that is incompatible with reports about yard signs supporting the president, nor with enthusiasm in his rallies.

Trump backers are not shy, there are just small quantities of them. The base is too small and Trump has failed to pivot to the center and enlarge his support.

Moreover, The Sienna College/New York Times polls of Michigan and Wisconsin – which together with Pennsylvania tipped the 2016 race in favor of Trump – showed Biden benefits from defectors from the president’s camp. Surveyees in these two critical battlegrounds said they voted for Trump and now for Biden. If they are willing to admit backing the president, they are not shy.

7( October surprise? Trump and Biden are set to meet in the second and final debate on October 22, and that is probably the president’s best chance to win back support. He faces an uphill battle due to time that is running out, the wide gap – and the fact that millions have already voted.

Can something like the Comey letter happen again? Anything is possible, but so far, nothing has stuck to Biden. The Trump campaign tried doubting the former VP’s mental capacity, being weak on China, false accusations of his son’s wrongdoing, and nothing worked.

In the meantime, the No. 1 topic worrying Americans is COVID-19, where approval of the president is trailing behind his general one – -17% vs. -11%.

With the recent upsurge in European COVID-19 cases and the focus on US politics, it is easy to forget that infections are on the rise in the US as well. After a peak in the summer in hot southern states, the disease is spreading in cold states. This is no “October surprise” as closed spaces are known to be a better breeding ground for the virus, whether they are airconditioned or heated.

Contagion in the north could further tip the few undecided voters in the former blue wall against Trump.

Conclusion and what to focus on

Overall, the polls are pointing to a high probability of Biden beating Trump, reflected in FiveThirtyEight’s 88% and The Economist’s 91%.

And as explained above, there is little reason to doubt the polls.

The battle for Senate is much closer, with FiveThirtyEight giving Democrats a 73% chance, and The Economist a 74% probability of flipping the upper chamber. There is little doubt that Dems will hold onto the House of Representatives.

With the coronavirus crisis still looming large over the economy, markets are focused on the next stimulus package.

Talks about new relief are unlikely to yield results with the clock ticking down to the vote. Trump cut off talks with the opposition only to see stocks fall and quickly return to the negotiating table. However, he left House Democrats with more leverage and he also discovered that Senate Republicans rediscovered their fiscally conservative roots, desiring only a “skinny bill.”

If Dems win the Senate, they are set to approve a large package, yet if Republicans hold onto the chamber, there are prospects only for minor support, making a difference for investors.

Therefore, unless there is an earth-shattering swing towards Trump, Senate polls may become more significant.

More Big move coming in EUR/USD? Fiscal stimulus and coronavirus are the keys

Peloton produces profit for the first time amid pandemic demand spike, stock pushes back toward record

Sterling In Focus As Brexit Showdown Looms Over Fishing Rights

Brexit talks between the UK and the European Union remain stalled, as the sides remain far apart on a number of key issues. The “flavor of the month” which is currently grabbing the headlines, is […]

It seems that Tuesday is a correction day. Indices are giving up Monday gains, safe havens are climbing higher and is declining towards the mid-term up trendline. This is perfectly normal and should not ring […]

Failing at crucial support could see a drop to $8

LINK is currently trading in an ascending wedge formation. 50-day SMA acts as a significant level of resistance. After reaching an all-time high of $19.20 on August 16, Chainlink dropped to a low of $7.60 on […]

BAND price is down 78% since its all-time high at $18.22 on August 10. The digital asset seems to have established a healthy support level at $4, and it’s ready for a rebound. Band Protocol […]

Ethereum price is $383 right above a critical support level. If the support level at $370 holds, ETH will target $500 as the next stop. Ethereum was bounded inside an ascending triangle on the daily […]

The Irani government will now allow imports to be paid for using Bitcoin, as per a recent report in local publication ISNA. The move is the first-of-its-kind and marks an important milestone in Bitcoin’s history. […]

A fully owned subsidiary of the private Russia-based Gazprombank (JSC) bank has received regulatory approval for rolling out institutional cryptocurrency services in Switzerland. According to the official announcement, the authorization from the Swiss Financial Market […]