Following an intraday dip to the 1.2040 region, the EUR/USD pair managed to regain traction and built on the previous day’s strong positive move. The first approval of a COVID-19 vaccine continued undermining the safe-haven US dollar, which was further pressured by the possibility of more US fiscal stimulus measures. This, in turn, was seen as one of the key factors that pushed the pair beyond the 1.2100 mark for the first time since April 2018.

The UK on Wednesday became the first country to approve a vaccine jointly developed by Pfizer and BioNTech and said that it would start inoculation of those most as risk early next week. Adding to this, investors remained optimistic that the US Congress will reach an agreement on fresh relief for a pandemic-hit US economy ahead of the December 11 deadline to pass a $1.4 trillion budget or risk a government shutdown.

The USD failed to gain any respite and remained depressed following the release of ADP report, which showed that private-sector employers added 307K jobs in November as against 410K anticipated. On the other hand, the shared currency got an additional boost from better-than-expected German Retail Sales figures and seemed rather unaffected by expectations that the European Central Bank will enhance its quantitative easing program next week.

Nevertheless, the pair ended near the top end of its daily trading range and edged higher for the third consecutive session on Thursday. The uptick marked the fourth day of a positive move in the previous five and pushed the pair to fresh 32-month tops during the Asian session. Market participants now look forward to the final version of the Eurozone Services PMI prints and the US economic releases – Initial Jobless Claims and ISM Non-Manufacturing PMI – for a fresh impetus.

The data, along with the broader market risk sentiment, will influence the USD price dynamics and produce some short-term trading opportunities during the early North American session. The key focus, however, will remain on Friday’s release of the closely watched US monthly jobs report – popularly known as NFP.

From a technical perspective, the pair this week confirmed a fresh bullish breakout through the 1.2010-15 resistance zone and seems poised to prolong its upward trajectory. The emergence of some dip-buying on Wednesday further reinforced the positive outlook. That said, overbought conditions on hourly/daily charts warrant some caution for aggressive bullish traders. Hence, it will be prudent to wait for some near-term consolidation or a modest pullback before positioning for any further near-term appreciating move.

Meanwhile, any meaningful dip below the 1.2100 mark might attract some dip-buying around the 1.2075-70 horizontal zone. This, in turn, should help limit the downside near the overnight swing lows, around the 1.2040 region. On the flip side, bulls might now aim to reclaim the 1.2200 round-figure mark before eventually pushing the pair further towards the next major hurdle near the 1.2235-40 zone. 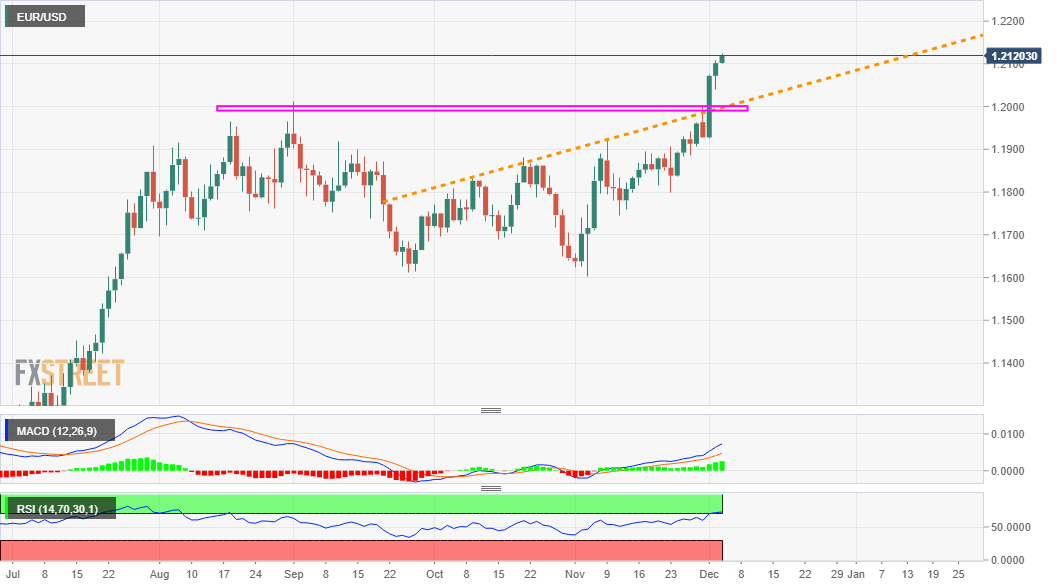 US House votes to increase direct payments to $2,000; vote now goes to Republican-controlled Senate finds resistance after $28,000 record. Key Events US contracts for the , , and advanced on Tuesday, along with European […]

DXY Forms Head and Shoulders Pattern Ahead of FOMC

GameStop, a company aimed at selling physical video games struggling in recent years, has seen its stock prices explode by triple-digit percentages in the past several days as a bunch of traders from a designated […]