The US economic expansion to date remains unusually strong overall, with one stark exception: . In contrast with , and — collectively known as the big-four macro indicators — the recovery in consumer income has been abnormally weak in comparison with economic recoveries following the end of recessions since 1970.

The reason, of course, is the atypical aspect of the business cycle during and following the onset of the pandemic. The sudden, dramatic collapse of the economy in the spring of 2020, followed by an equally remarkable government-supported recovery overall.

The exception is personal income. As the first chart below shows, the recovery in household income has been notably soft relative to recoveries over the past 50 years. Indeed, since the current expansion began in May 2020, US personal income has varied sharply, but remains effectively flat through July 2021 since the expansion started over a year ago. By comparison, recoveries in income in decades past at equivalent points in expansions have been sharply stronger.

It’s unclear if this is a temporary phenomenon or if there will be lasting repercussions for the economy. It’s also premature to draw hard and fast conclusions about the trend, given the unusually abnormal path of economic activity during the pandemic. But this much is clear: if personal income’s rebound remains unusually weak, as it has so far, there will be a cost for the US economy, perhaps in the form of softer-than-expected gains in consumer spending in the months and years ahead.

In any case, monitoring upcoming updates of monthly personal income reports deserves close attention for evaluating this risk. The August report on personal income is scheduled for Oct.1.

Meantime, three other key indicators for economic activity – employment, consumer spending and industrial production – continue to post unusually strong recoveries vs. previous expansions, as shown in the charts below. (Note: the current recoveries for this trio of indicators runs through August 2021, a month ahead of the latest personal income numbers). Will these robust gains offset the weak recovery in personal income in some degree and lay the groundwork for a catch-up recovery? Unclear for now, but at least this trio of indicators continues to post relative strength in a hefty degree, providing in the aggregate a powerful driver for keeping the expansion alive. 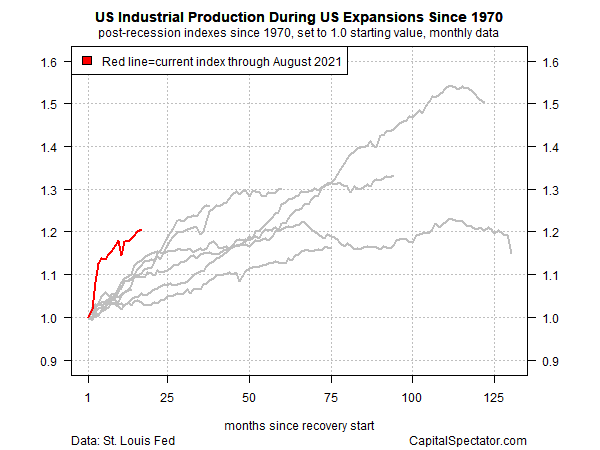 US Industrial Production During US Expansions Since 1970

Dow Jones Price Outlook: Dow Jones Price Forecast: Broader Uptrend Remains Intact Despite Volatility The Dow Jones has been an outstanding performer among the three US indices over the last few months as the ongoing […]

Options Trading for Beginners: Crash Course on Increasing Your Income. Strategies for Day Trading Using Swing and Options Trading as Investments for a Living