US futures and global stocks rose on Monday, following an array of positive corporate deal news and and further announcements on a COVID-19 vaccine.

Contracts on the , and increased more than 1% this morning while futures for the climbed 1.48% on the heels of first back-to-back decline for US stocks since April, and the biggest losses since before markets bottomed in March.

The dollar was slightly weaker while gold remained flat.

Over the weekend, AstraZeneca (NYSE:) announced it was restarting Phase III trials on its coronavirus vaccine and Pfizer (NYSE:) CEO Albert Bourla said its vaccine may be distributed as early as the end of this year, improving sentiment.

It was reported that Oracle (NYSE:) was on track to announce the partnership battle for TikTok, the Chinese social media app, beating out Microsoft (NASDAQ:).

And Gilead Sciences (NASDAQ:) announced it will buy biotech, Immunomedics (NASDAQ:) for $21 billion.

All of this positive dealmaking along with renewed hopes a COVID-19 vaccine, ahead of this week’s Fed policy that is widely expected to remain dovish, provides bargain hunters all the fuel they require to jump right back into equities.

Analysts are also predicting that the acute US selloff may be coming to an end, having achieved a healthy correction. Of course, that assessment is based on the premise that the bull market will endure. Goldman says it remains “optimistic about the path of the US equity market in coming months.”

While we cannot predict the future, we’re not as optimistic.

Putting aside all the fundamental arguments we’ve been making even as the US stock market provided investors the best returns in decades, the Index may be showing signs of a reversal.

We’re not bearish at this point, but we’re not bullish either. We’re on the fence. Here’s why:

Strictly speaking, the S&P completed a descending series of peaks and trough, after having found resistance by the top of a since January 2018. However, we won’t consider it a reversal unless prices decline below the previous trough in the uptrend. 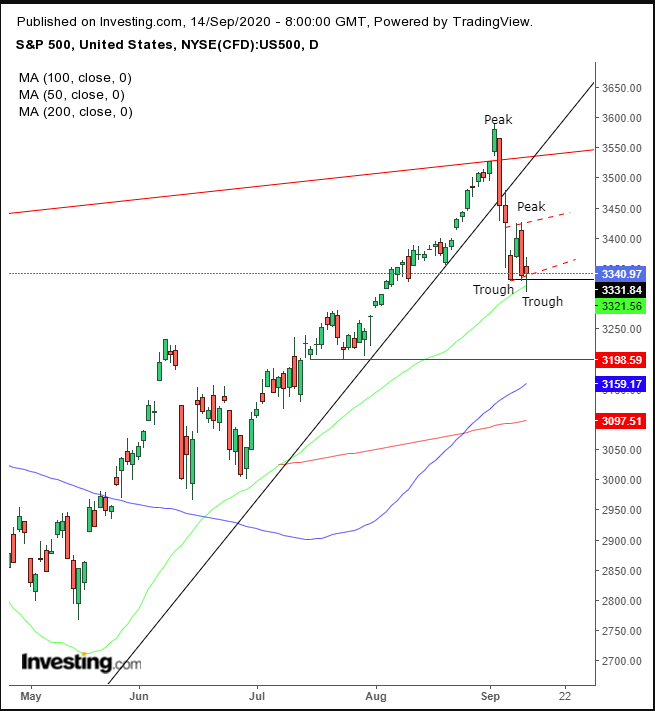 The 7% drop, followed by consolidation, may be biased to a downside breakout. Given that such a continuation pattern’s implied target is the preceding move, it may give the move the oomph needed to break the 3,200 support.

But, again, unless a new high is made or the price takes out the previous uptrend’s low, we’re on the fence.

The Index advanced with all 19 industry groups, but as with US futures, shares led the gains.

Australia’s was the second best performer during the Asian session. It was up 0.7% boosted by mining stocks as well as on the news that the state of Victoria, the country’s COVID hotspot, reported its lowest one-day climb in new cases in almost three months.

Japan’s followed, (+0.65%), as its ruling Liberal Democratic Party nominated a new leader, Yoshihide Suga, rendering him the next Prime Minister.

Friday was the fourth loss in five days for megacap technology shares, on worries that valuations were unjustifiably high after a five-month rally. The dropped 0.6%, but even the S&P 500, which closed flat for the day, fell as much as 2.1% for the week, as volatility returned to stocks.

Yields, including Treasuries, edged lower along a H&S top, pressured by the 200 DMA, and with momentum falling. 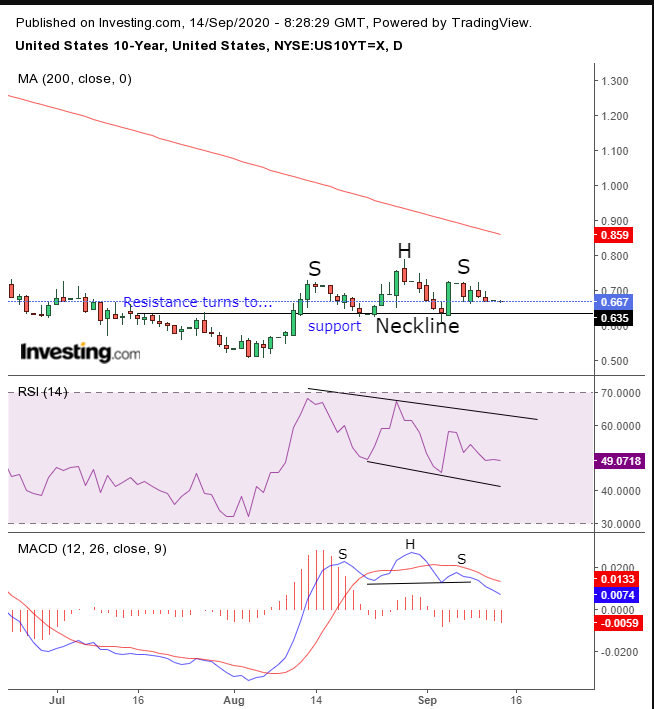 The pattern is not defined only by the recent, narrow price action, but remains in a slim range even via the MACD. 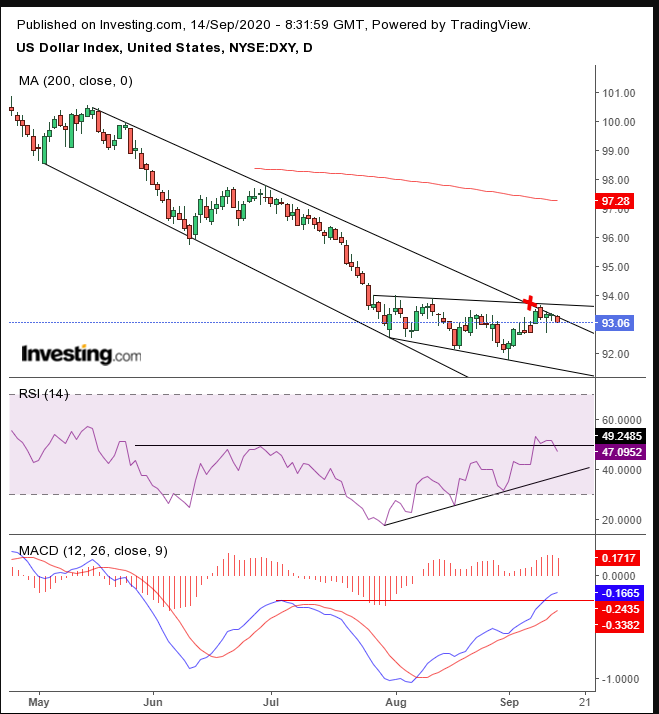 The USD’s more sensitive RSI has fallen below its resistance since mid-June, while still up after the MACD’s short MA peaked above its highest since July 2.

rose from the bottom of a potential bearish flag, the third consecutive such pattern, developing within a larger pennant, bullish within the uptrend. 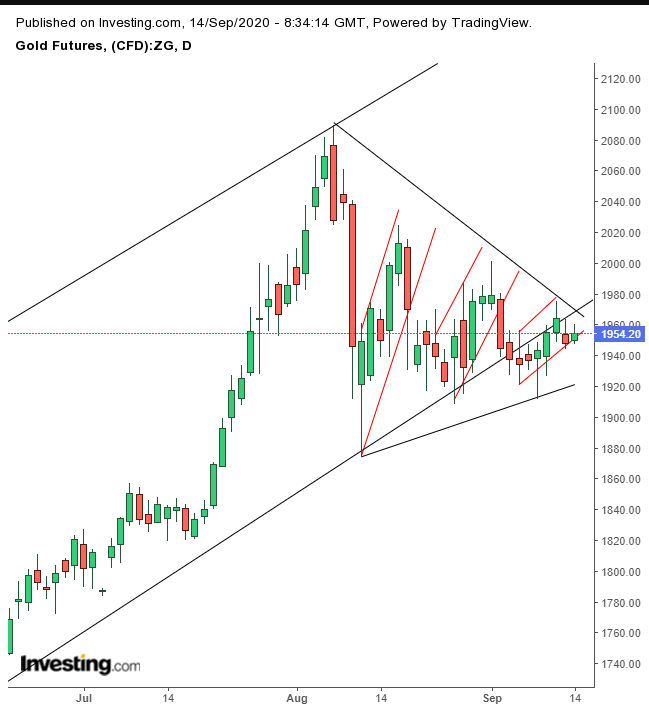 However, only a decisive pennant breakout will determine the precious metal’s next push.

rose within a pennant. 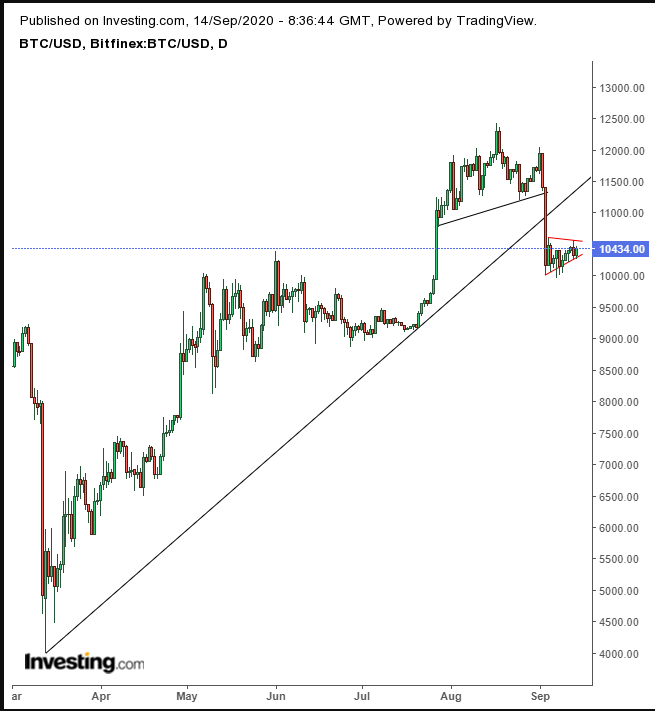 The cryptocurrency was bearish after the preceding downside breakout of a H&S that achieved the pattern’s implied target within a single day, which also broke its uptrend line since the early March bottom.

gave up on its first advance in four sessions after back-to-back weekly losses an OPEC+ meeting. Energy major BP (NYSE:) said that oil consumption may never return to the levels seen before the pandemic. 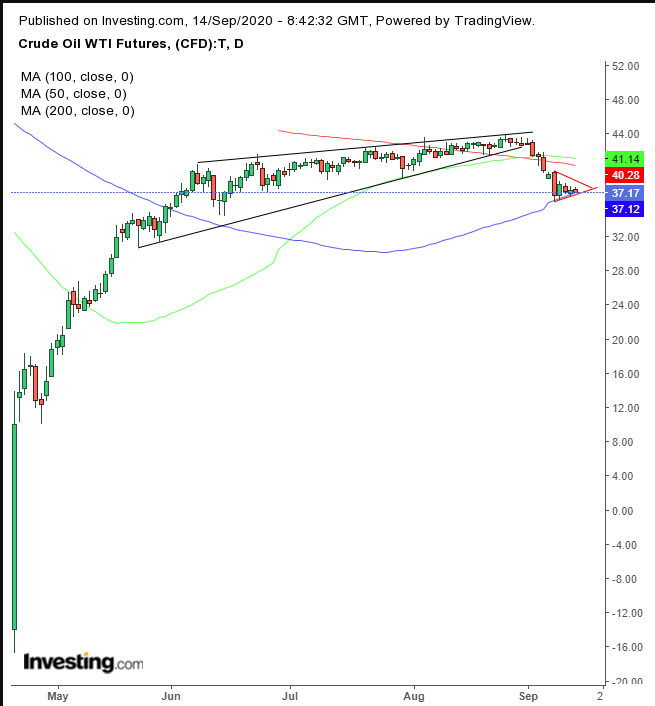 WTI has been developing a pennant bearish after the preceding 16.75% plunge within 6 sessions, completing a rising wedge, itself bearish after the climatic rally that preceded it. A downside breakout will set a decline toward $30.

DXY Forms Head and Shoulders Pattern Ahead of FOMC

GameStop, a company aimed at selling physical video games struggling in recent years, has seen its stock prices explode by triple-digit percentages in the past several days as a bunch of traders from a designated […]