Stocks in Europe set new records, while US futures on the , , and also flirted with all time-highs in trading on Monday as speculation increased that the Federal Reserve will persist in its dovish policy despite the economic rebound and higher inflation.

In Europe, the Index extended its four straight-week rally, after the proved persistent in its ultra-loose monetary policy.

Although US contracts were trading in the green, traders will be closely watching the US Federal Reserve two-day policy and they will parse through the verbiage to find any signpost that the Fed may tapering its gargantuan QE program.

Yields on the Treasury note extended towards 1.47%, perhaps on their way back to the top of a falling channel. 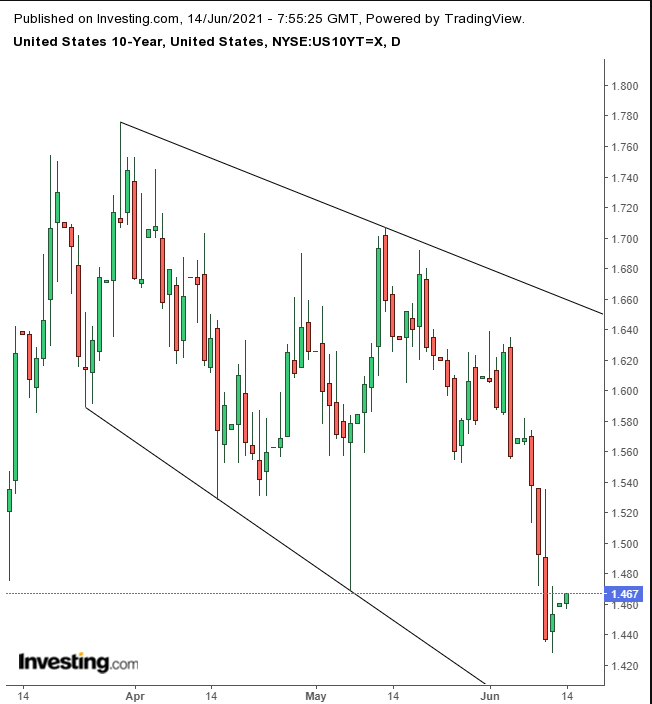 The move reflects anticipation that the US central bank will reaffirm its unprecedented easing.

Economists forecast that officials will project rising rates in 2024 when the economic expansion picks up.

The pared Friday’s surge, as the greenback may still be developing a rising channel, after having fallen below the (red) uptrend line since the Jan. 6 low. 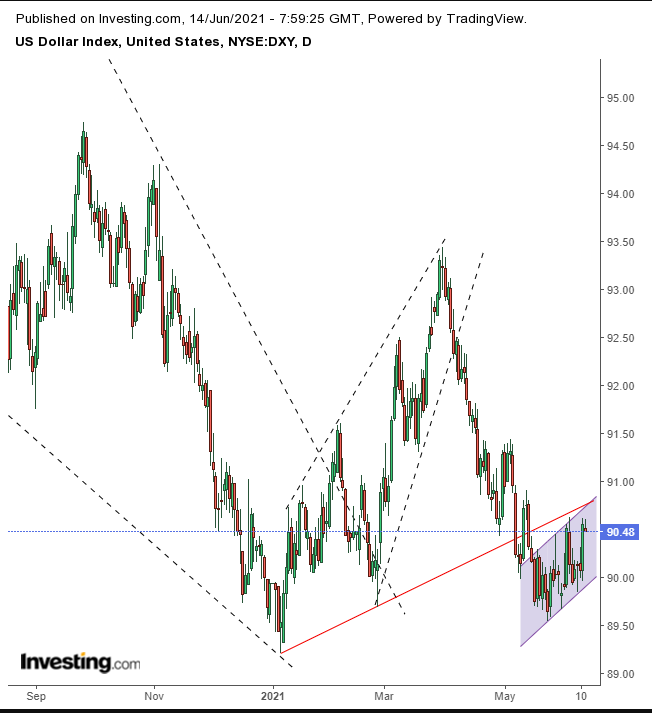 A downside breakout would suggest another retest of that low, before falling to a 2018 low. A return above the red trend line would increase the odds of a resumption of the uptrend following the massive wedge since the 2020 peak.

fell to a monthly low, as it is finally showing signs of a meaningful correction, having fallen out of its rising channel. The yellow metal is expected to ahead of the Fed meeting. 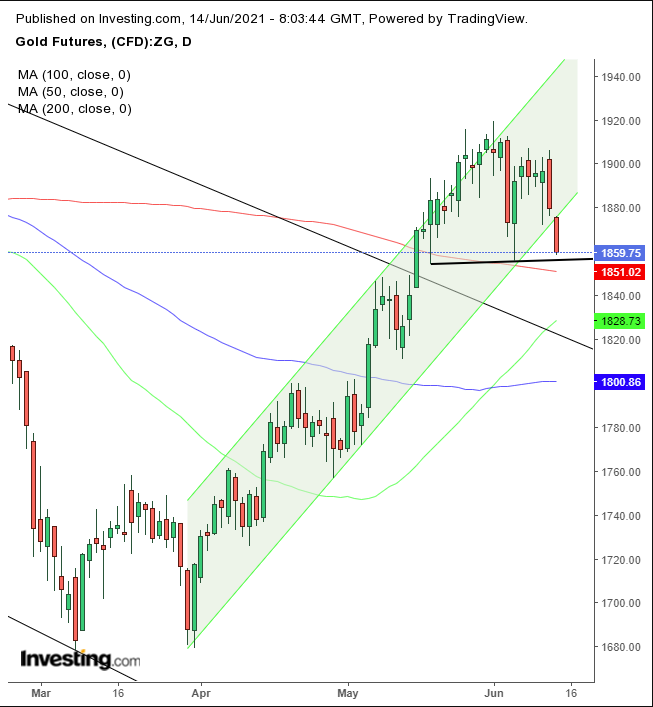 If the yellow metal will fall below the 200 DMA, completing a small H&S top, it will retest the top of its broad falling channel since the 2020 record peak, from which it broke out on May 17, as it traversed above the 200 DMA at the same time.

jumped over the weekend after Elon Musk surprised again saying Tesla (NASDAQ:) may resume transactions with the digital currency when mining is done in a more environmentally friendly way. 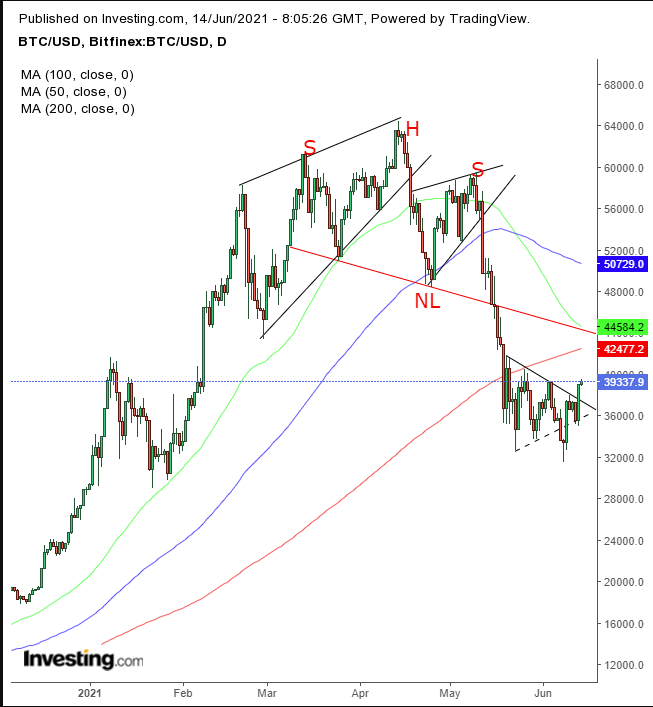 The cryptocurrency blew out a bearish pennant, putting the digital token in a trajectory that will take on the extended neckline of the H&S top, whose implied target wiped out more than half of its value.

extended a three-week rally on views that the economic restart will be sustained in the summer with increased demand in the US and Europe as consumers celebrate life outside of their homes. Hedge funds increased net bullish positions to an almost three-year high. 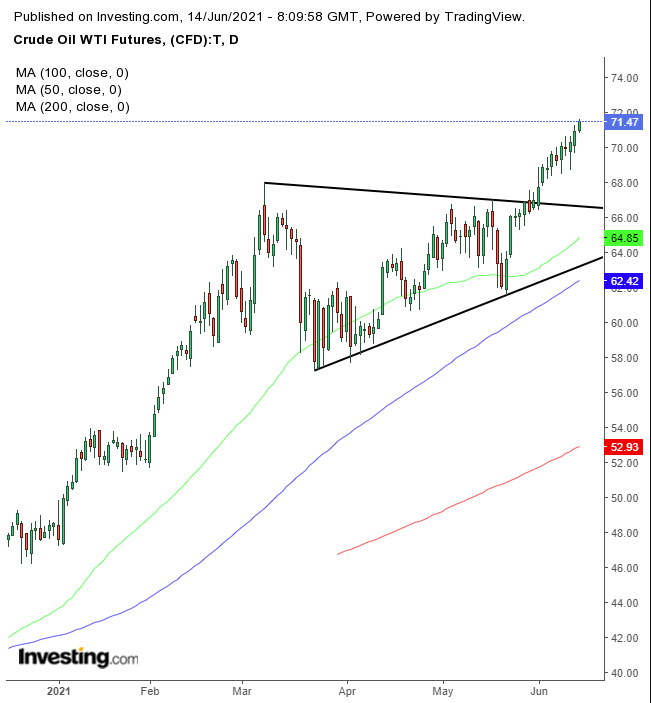 Oil extended the breakout of a bullish triangle.

A report that the Biden administration is considering ways to afford US refiners relief on biofuel sent , and futures into a selloff. 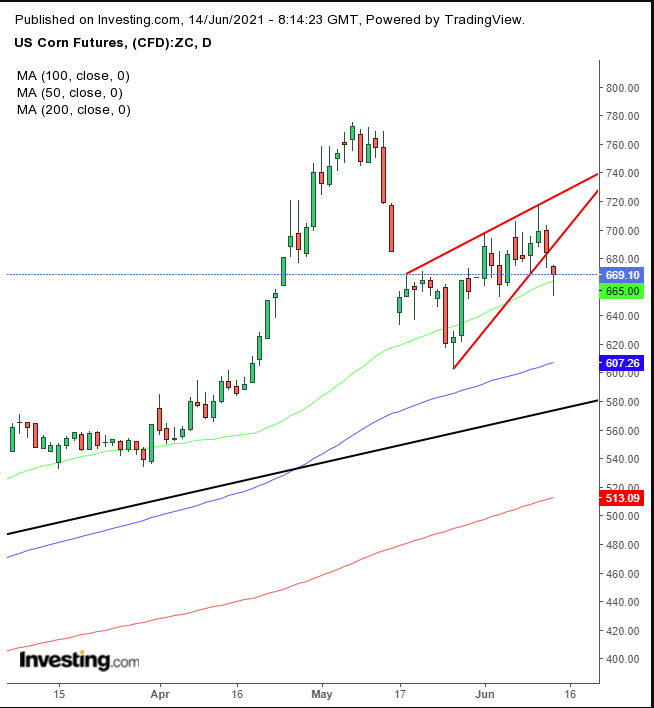 US corn futures completed a bearish wedge that would challenge the uptrend line since the August low. 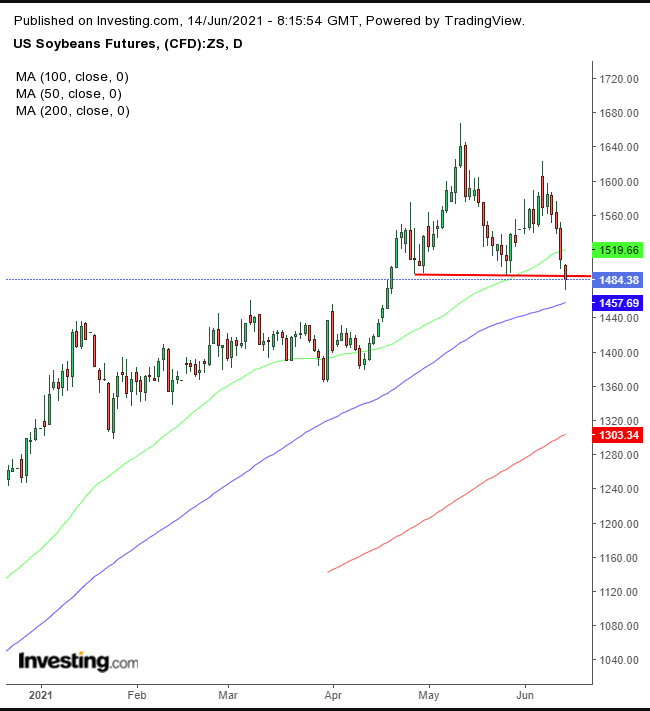 Soybean futures were struggling to complete a H&S top.

Opinion: Should I sell my stocks so I can pay cash for a house?

My wife and I are 27, and we have accumulated about $300,000 in savings combined via passive investing over the last couple of years. What is your opinion on liquidating all of our assets and […]

Inflation concerns persist Pressure on tech sector Dollar recovers Key Events Futures on the , , and as well as European shares paused on Tuesday, ahead of the US session open as traders remain on […]

Investors Get Nervous Ahead of the U.S. Inflation Data

Equities turned south during the US trading on Monday, and today in Asia. It seems that investors may have started getting nervous ahead of today’s US inflation data as a further surge may raise questions […]