US futures for the , , and pushed higher on Wednesday, and European shares rose, lifted by hopes of additional UK stimulus after poor , showing Britain’s economy had entered a recession, and data that was, nonetheless, better than anticipated.

Treasuries extended a selloff and gold found its footing.

Though Asian indices struggled to break free of the gloom that remained after yesterday’s Wall Street rout, triggered by fading hopes for additional US stimulus, ES contracts climbed this morning, breaking free of a range since yesterday’s close of the benchmark. 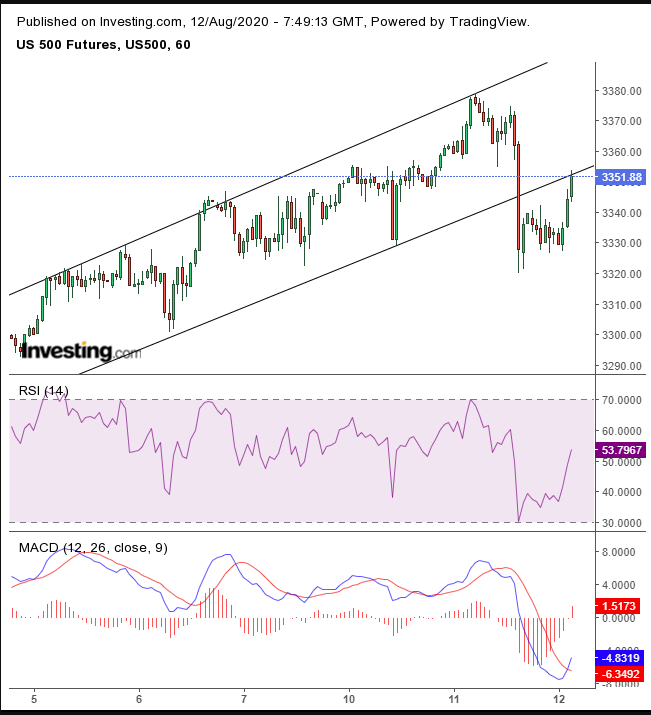 While both the MACD and RSI bottomed out, contracts on the S&P 500 found resistance by the bottom of a rising channel, in place since Aug. 3, that yesterday failed to keep the price within its boundaries.

The recovered from an initial dip fueled by technology and healthcare shares. However, a jump in telecoms stocks boosted the pan-European index after Switzerland’s Sunrise Communications (SIX:) received a $1 billion takeover offer from UK-based Liberty Global (NASDAQ:).  Shares of the Swiss company jumped more than 26%.

Trade in Asia was mixed this morning. Hong Kong’s outperformed, (+1.4%), as Chinese funds made record purchases to stabilize the city’s economy after months of civil unrest; a string of high-profile listings of giant tech companies added to the exuberance. China’s underperformed for a second session, (-0.6%), as slower growth in bank lending offset a recovery in car sales, as US-Sino diplomatic headwinds continue looming large.

Tuesday, during the New York session, US stocks suddenly dropped in the final two hours of trade as investors locked in profits on some of the Wall Street rally’s biggest winners after Republican Senate Majority Leader Mitch McConnel said a stimulus deal could take weeks to pass.

In the aftermath, the SPX up-ended what could have been an eight-day rally, its longest upswing since the spring of 2019, which took the benchmark to less than 0.4% from its Feb. 19 all-time high. 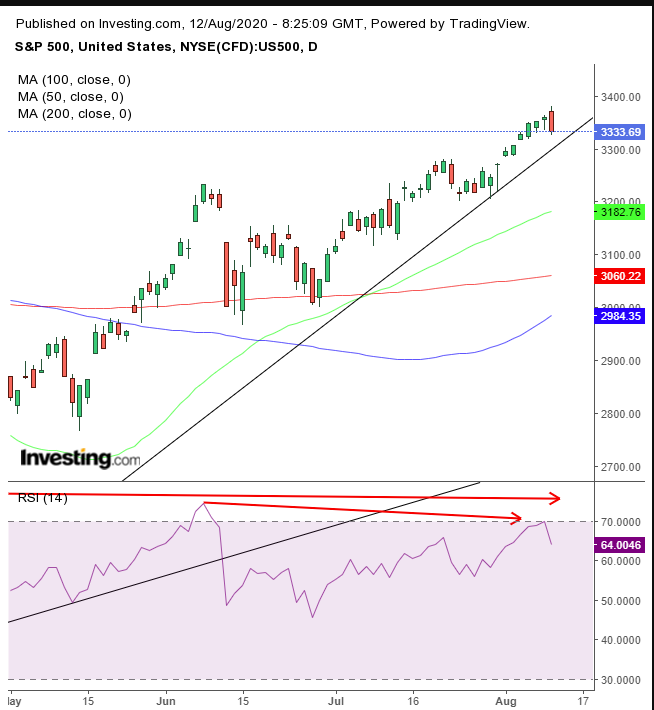 The late-session selloff completed a double-bearish pattern: a Bearish Engulfing pattern that also confirmed Monday’s hanging man. The RSI curved down from its 70 oversold level. The momentum-based indicator failed to climb above its June high, forming a double negative divergence, including slowing momentum from January 2018. This contrasts with —along the pattern of its long-term broadening pattern.

Yields, including for the US Treasury benchmark, climbed for a fourth straight day. 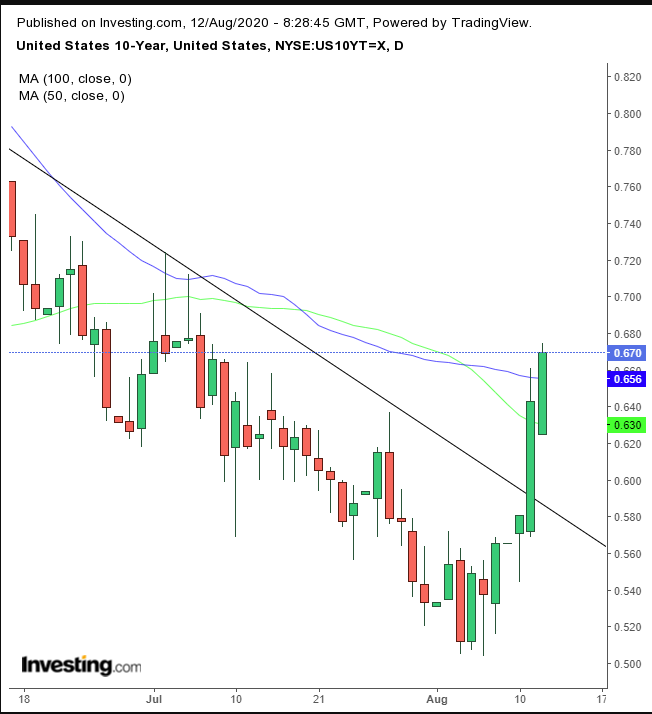 Rates broke free of a downtrend line since June 16, and closed above the 100 DMA, after bouncing off the 50 DMA.

The gave up gains, even after news of the delayed stimulus boosted greenback demand. 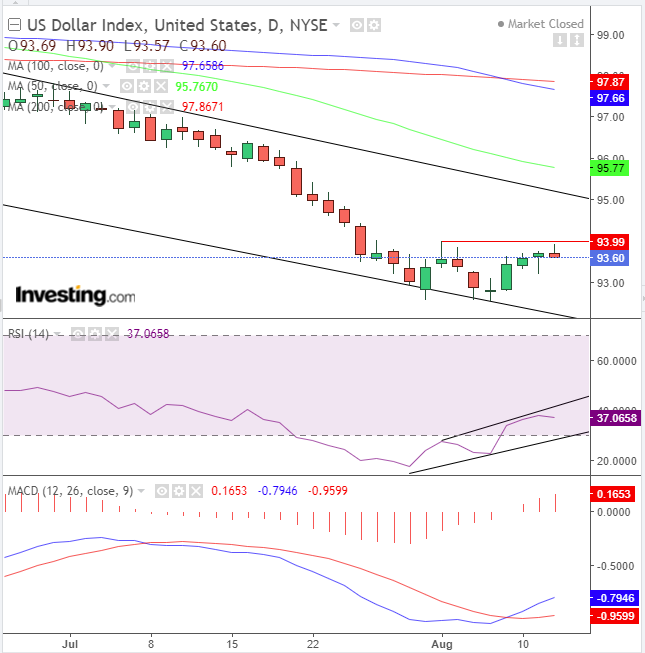 All charts powered by TradingView

Yesterday’s late rebound for the global reserve currency formed a hanging man on the chart. If today’s trading takes the Dollar Index below 93.62, and it closes at that point, it will have completed a shooting star, confirming the bearish intent of yesterday’s hanging man. This would also reaffirm the bearish engulfing pattern over a shooting star which occurred early in the month.

On the other hand, should the dollar break through the 94 resistance, it will have completed a small double bottom. The larger technical forces are the conflict between the falling channel since April and the rising channel since 2009.

Delayed stimulus provoked traders to quickly take advantage of a sudden, newfound arbitrage opportunity, increasing demand for the now-more-valuable dollar, at the expense of . 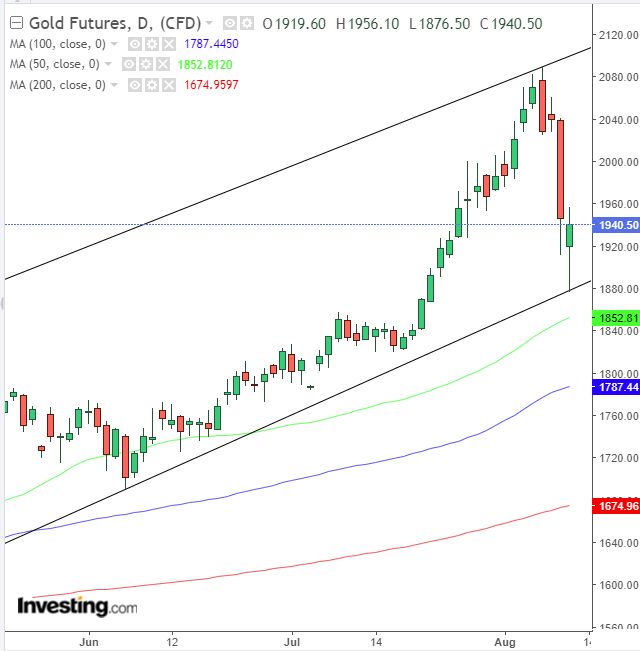 The precious metal fell for the third day out of four, after it tumbled the most in seven years on Tuesday. It’s now bounced off the bottom of its rising channel, paring almost all of today’s losses, posting a possible, imperfect hammer, with an upper shadow. 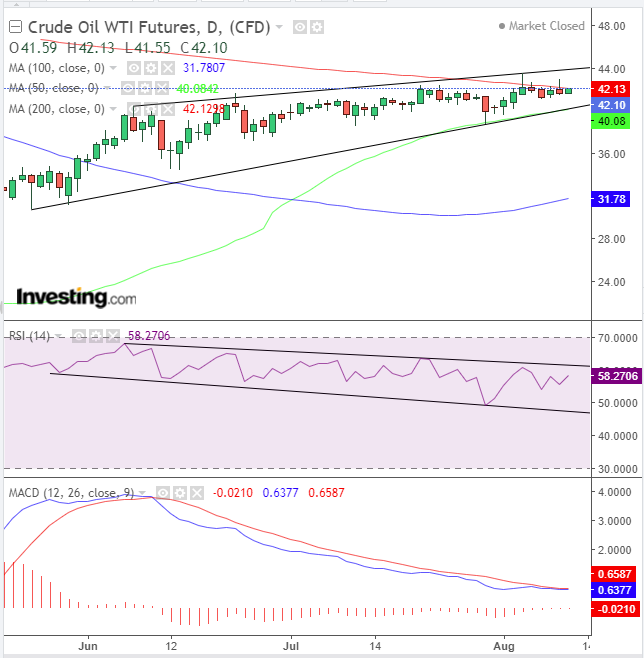 As WTI climbed, it continued to churn in a counter-intuitive rising wedge, following a rally rather than a descent. Today is the sixth day in a row that the price took on the 200 DMA but failed to surpass it. The RSI and MACD remained in a bearish posture.

Gold Price Talking Points The price of gold preserves the monthly opening range ahead of the Federal Reserve interest rate decision on September 16, but the crowding behavior in the US Dollar appears to be […]

Dollar as a Safe Haven or Source of Global Instability?

US Dollar Points: The Dollar maintains a distinct ‘safe haven’ status, but it is when absolute liquidity is prized that the currency’s nuanced problems are downplayed Stimulus remains a prominent theme heading into the third […]

Bitcoin’s rally from $12,000 has been mostly driven by “institutional hunger”: data

Poised to surpass 1.2200 mark amid vaccine, US fiscal stimulus optimism

French regulator demonstrates sour grapes and a very unusual view on post-Brexit electronic trading. What are they talking about? French securities regulator the AMF has told the EU that it should fix its derivatives trading […]

GBP price, Brexit news and analysis: GBP/USD looks to be stuck in a broad band between just under 1.33 and 1.3440 as the markets react to indications that the EU-UK talks on their relationship post-Brexit […]

German Chancellor Angela Merkel speaks to the media following a virtual meeting between Merkel and the leaders of Germany’s 16 states during the second wave of the coronavirus pandemic on December 2, 2020 in Berlin, […]