US futures for the , , and wavered on Thursday, even as European shares headed higher, snapping a two-day losing streak, following a positive Asian session.

This morning’s boost was driven by hopes of additional economic support measures ahead of today’s between euro area finance ministers. It follows yesterday’s UK government announcement of its latest economic rescue plan which would pump 30 billion pounds ($38 million) into the British economy as it reopens. As well, with earnings season approaching, prospects of reassuring corporate news, such as from Germany’s SAP this morning, helped fuel market optimism.

The dollar rebounded from a loss, even as yields remained at their lows. Nonetheless, gold reached a nine-year high as coronavirus worries continued to weigh on investors as the global confirmed case count crossed 12 million.

US futures contracts for the SPX, Dow and Russell 2000 are all down, while NASDAQ futures have been gaining, one day after the tech-heavy index posted a fresh record.

The rose software giant SAP (DE:) indicated it was in its business after the decline caused by pandemic. The German multinational corporation surged 6.5% to a record after confirming its full year outlook. Just the fact that the company was willing—and able—to provide a forecast was positive in and of itself after 80% of S&P 500 stocks didn’t provide guidance last quarter.

During the Asian session anticipation that earnings season will confirm an economic recovery fueled gains. China’s outperformed for a fourth day, (+1.39). The mainland index notched its the 8th day continuous advance, its longest winning streak since January 2018.

Right now China is enjoying two tailwinds that could be dual catalysts for the exuberance of its local markets. To begin with, it was the first country to effectively emerge from lockdowns and flatten the curve. Second, generous government stimulus along with state media selling the fundamentals of stock ownership helped produce the current powerful rally, albeit one that has the telltale signs of a bubble.

As common investor wisdom posits, when the broader public gets involved in the market, it’s often the beginning of the end.

On Wednesday, US equities advanced during the New York session. Traders continue to consider big tech a sure bet, notwithstanding any geopolitcal health or Sino-US trade risks.

The hit a monthly high and the achieved a fresh record, its 25th for the year, thanks to such mega cap tech stalwarts as Apple (NASDAQ:) and Amazon (NASDAQ:).

The problem over the long run, of course, is that a few large caps can’t carry the entire market. This divergence is, in fact, a sign of market weakness.

We can see this divergence on the chart, via the AD section. 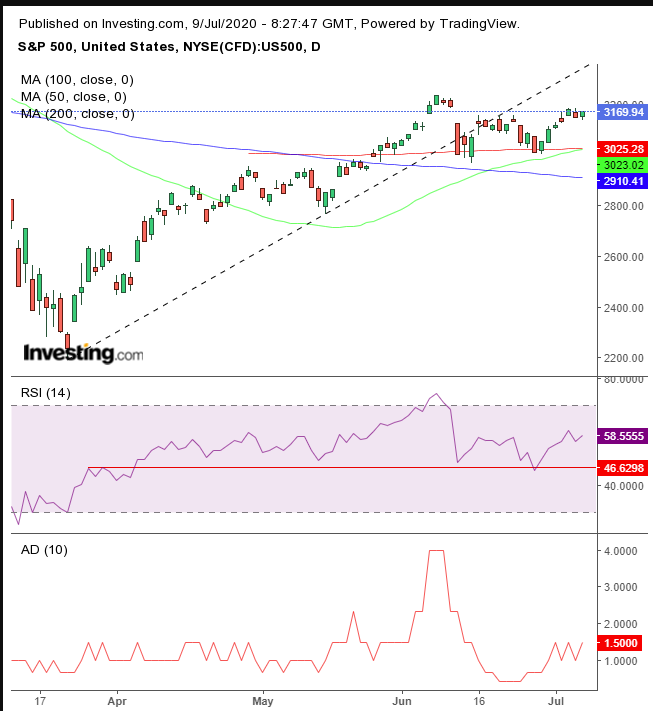 The Advance / Decline measures the number of stocks rallying versus those that are falling. Note how much lower the current read, at 1.5, is versus the over 4 reading registered on June 8. The RSI may be developing a H&S top.

Yields, including for the Treasury, trimmed yesterday’s gains. 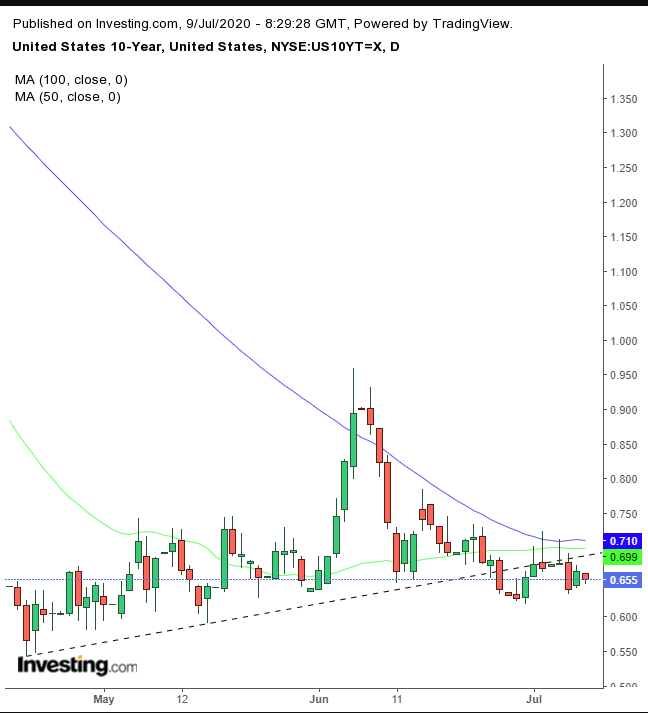 The move confirmed the resistance of the broken uptrend line since April 21, compounded by the joint 50 and 100 DMAs.

The traded off its lows, but still within a second consecutive decline. 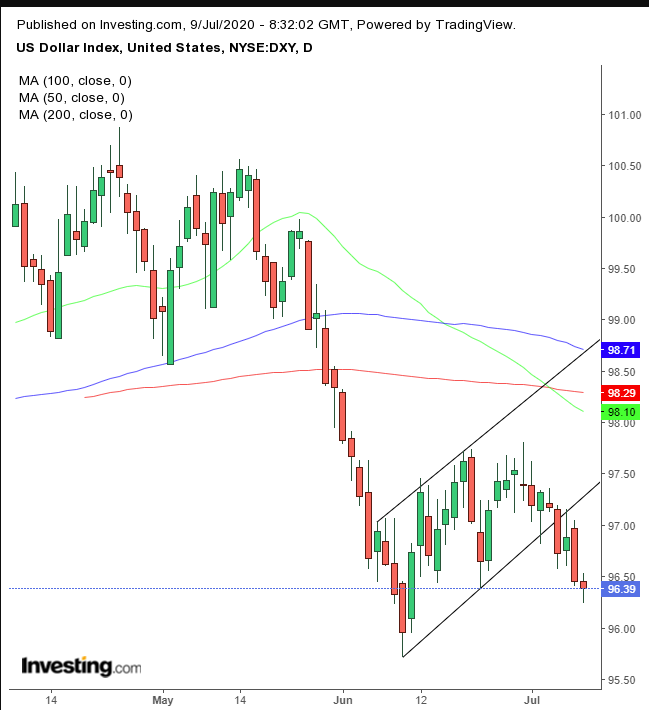 A close at 96.50 or higher would complete a hammer, confirming the support of the June 16 and 24 lows, a potential setup for a return move to test the falling flag. The 50 DMA crossed below a falling 200 DMA, triggering a potent Death Cross, ahead of the flag’s completion.

edged higher, extending an advance to its fourth day in a row as it continues to hold above $1,800, . 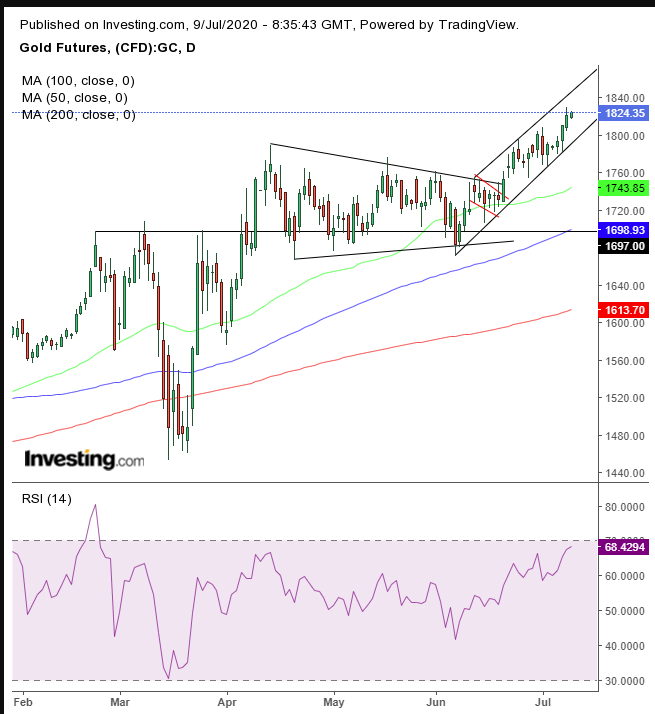 The precious metal has fulfilled the triple bullish pattern: H&S, symmetrical triangle and falling flag. It’s currently trading within a rising channel that is too narrow for comfort, which might lead to a corrective dip, as momentum peaks, with the RSI reaching the 70 level.

continues to cling to the $40 level, trading within the same range for over a month. Six issues appear to be . 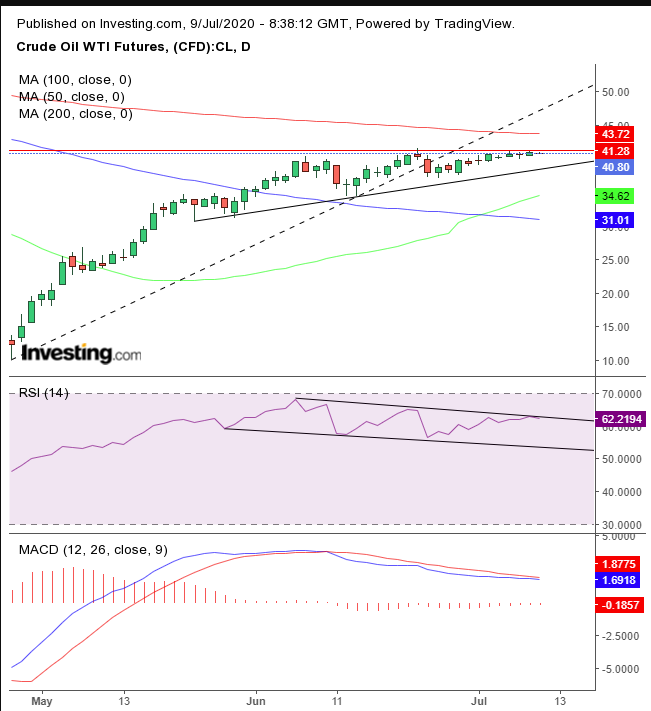 WTI is below the resistance of the March 6 falling flag that wiped out almost a quarter of the commodity’s value. Both the RSI and MACD are providing negative divergences. Oil already broke its uptrend line, but is still within a broader uptrend, with rising peaks and troughs.

On an organic basis, however, revenue decreased 7% compared to the prior year period, primarily due to reduced consumer spending trends. Financial services technology provider FIS (NYSE:FIS) today reported its second quarter 2020 results. On […]

EUR/USD Price, News and Analysis: Germany and France may push for a new lockdown. ECB policy decisions will be shaped by the renewed coronavirus outbreak IG trader sentiment hints at lower prices. France is considering […]

2020 has been so far a challenging year. Issues such as the Australian wildfires and the global COVID-19 pandemic have harmed the planet and its inhabitants. The financial world has also suffered, especially during the […]

Bitcoin is The Biggest Bubble Ever, Says Peter Schiff… Again

Bitcoin skeptic Peter Schiff has done it again: The notorious gold bug, famous for being the owner of the only Bitcoin wallet capable of forgetting passwords, claimed that this time —unlike his other failed predictions— […]

Investors trimmed their open interest positions in Gold futures markets by around 10.5K contracts on Wednesday, according to advanced figures from CME Group. Volume, instead, went up sharply by around 144.3K contracts, reversing three consecutive […]

DOT/USD has been on a downtrend after charting the evening star pattern. The 4-hour chart has flashed the buy signal with a red-nine candlestick in the TD sequential indicator. Polkadot has had three consecutive bearish […]

Haven buying propels the US dollar higher The greenback enjoyed a robust overnight session as investors rotated out of G-10 currencies and into dollar and yen haven positioning. The dollar index rose through its 50-day […]

Polkadot bounces off support at $4.2 as buyers regain control of the price. DOT/USD must clear the resistance at the 50 SMA for gains to $5.00 to materialize. Polkadot has lost more than 7% of […]

GBP price, Brexit news and analysis: GBP/USD is back to the 1.30 level and rising gently after Wednesday’s selloff led to a brief spike below trendline support that was soon reversed. Near-term, as ever, GBP/USD […]