Crude Oil: Oil prices heavily in the red to begin the week amid an expected further deterioration in oil demand as countries persists with further lockdown measures. Overnight, US President Trump stated that American citizens should maintain social distancing until the end of April, while weekend reports signalled that the UK may be in lockdown until June. As such, oil prices continue to head lower with WTI crude futures trading south of $20/bbl for the first time since 2002. Elsewhere, Saudi Arabia opposed an emergency meeting with the OPEC President, indicating that Saudi Arabia remain comfortable with its current output policy. In turn, commodity linked currencies have been among the underperformers with the Canadian Dollar leading the losses in the G10 complex.

That said, at the time of writing, President Trump has stated that he will be communicating with Russia’s Putin today in order to discuss oil, providing a slight relief for oil prices. As a reminder, the Trump Administration had reportedly asked Saudi Arabia to hold off on plans to ramp up production to in April.

ZAR: South African sovereign debt now sub-investment grade after Moody’s downgraded SA debt to junk status. In turn, USD/ZAR hit a fresh record high above the 18.00 handle with SA bonds to be excluded from the World Government Bond Index from the end of next month.

US Dollar: The greenback is on the front, potentially emanating from month and quarter end rebalancing flows, which had pointed to notable USD buying. As such, the Euro looks to have topped out for now with eyes on a downside break of the 1.10 handle. 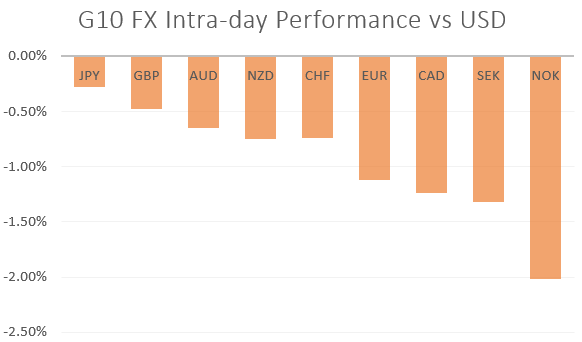 Is USD Stablecoin Rise Fueled by Chinese Demand for Bitcoin and Crypto?

Tether prints another 120 million USDT to its inventory as the total amount of USDT issued now equals $6,803,667,043.90. Reportedly, the global demand for the US Dollar is manifesting itself via Tether, as Chinese crypto […]