As we noted , hopes are high heading into this week’s , with potential to see over 1,000,000 net new jobs for the first time in eight months as the country gradually opens up amidst widespread vaccine distribution. In addition to the strong headline jobs reading, economists are also looking for the to tick down to 5.8% and to come in flat month-over-month: 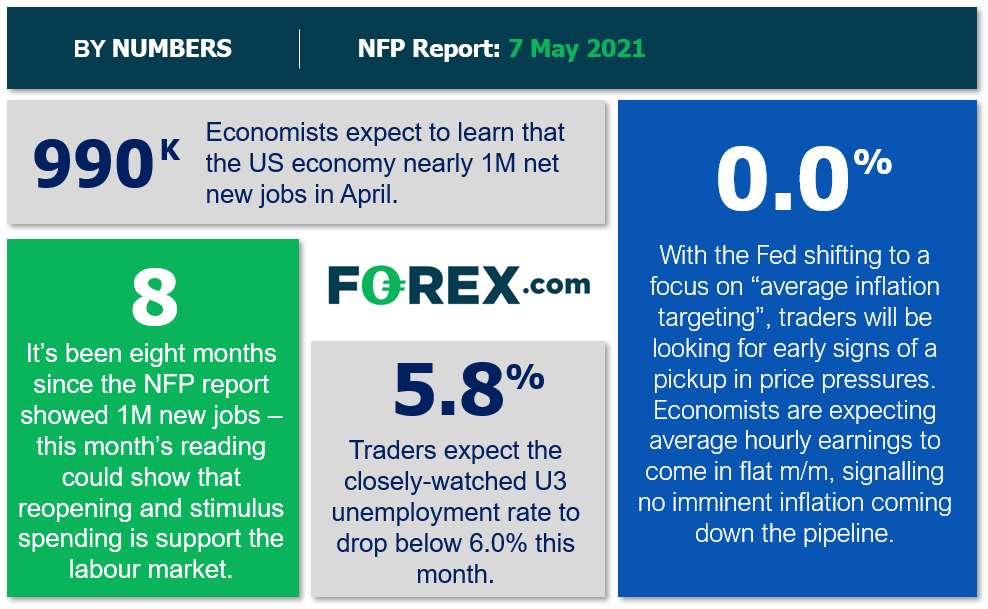 Are these expectations justified? We dive into the key leading indicators for Friday’s critical jobs report below:

As we’ve noted repeatedly over the last few months, traders should take any forward-looking economic estimates with a massive grain of salt given the truly unparalleled global economic disruption as a result of COVID-19’s spread. That said, weighing the data and our internal models, the leading indicators point to a slightly worse-than-expected reading from the April NFP report, with headline job growth potentially coming in somewhere in the 800k-900k range, albeit with a bigger band of uncertainty than ever given the current state of affairs.

Regardless, the month-to-month fluctuations in this report are notoriously difficult to predict, so we wouldn’t put too much stock into any forecasts (including ours). As always, the other aspects of the release, prominently including the closely-watched average hourly earnings figure, will likely be just as important as the headline figure itself.

The gave back most of March’s gains through the month of April, with most major currencies gaining 200-300 pips against the world’s reserve currency last month. With the greenback getting off to a better start to the month of May, the NFP report could set the tone for the remainder of the month.

After the sharp selloff in April, the nascent US dollar rally could extend further if we see a strong US jobs report. In that scenario, readers may want to look at as a potential long candidate, with room for the pair to rally back toward previous highs in the mid-110.00s after retracing 38.2% of its Q1 rally last month.

On the other hand, a weaker-than-anticipated jobs report could create a sell opportunity in (pending the simultaneous release of the ) if it can break below multi-year lows near 1.2250.

Price: From bestselling writer David Graeber—“a master of opening up thought and stimulating debate” (Slate)—a powerful argument against the rise of meaningless, unfulfilling jobs…and their consequences. Does your job make a meaningful contribution to the […]

by Adam Button Friday’s report struck just the right tone for those hoping for a long period of ultra-low rates in the US. In a rare divergence of the antipodeans, the was the top-performing G10 […]

Economists and investors could not have been more wrong about today’s U.S. jobs report. The traded sharply lower against all of the major currencies on the back of what can only be described as an abysmal […]