Short-covering ahead of the FOMC’s outcome tomorrow appeared to be lending the support today. It extended yesterday’s gains against the , , and .

Among emerging market currencies, the Turkish , along with the South Korean and Taiwanese , led the few advancers. In contrast, the South African and eastern and central European currencies were dragged lower by the heavier euro.

Ahead of the $62 bln seven-year auction and $28 bln two-year floater, the US benchmark yield was firm around 1.58%. Yesterday’s auction results were acceptable, and the market barely reacted.

European bond yields were also a little higher as well. Equity markets were mixed. Except for China and India, most bourses in the Asia Pacific area slipped, while Europe’s Dow Jones was directionless. US futures are sporting small gains.

The weaker dollar and firmer rates appear to be weighing on , which was turned back from $1800 last week. was building on yesterday’s recovery ahead of the outcome of the OPEC+ monitoring committee. Yesterday, its technical panel revised up global demand this year by 6 mln barrels per day, but was cautious given the pandemic’s toll in India and Brazil.

The Bank of Japan left on hold as widely expected, and it offered minor tweaks in its forecasts, which it extended to FY23. It raised its growth forecast for this fiscal year and next (now midpoint is 4% this year and 2.4% next from 3.9% and 1.8%, respectively).

However, the inflation forecast for this fiscal year to 0.1% (from 0.5%), and for the first time, the BOJ admitted it will not achieve its 2% inflation target during BOJ Governor Kuroda’s term that ends in April 2023. The cut in this year’s inflation forecast was attributed to Prime Minister Suga’s effort to cut mobile phone charges. Tomorrow the BOJ will announce its planned bond purchases for next month. 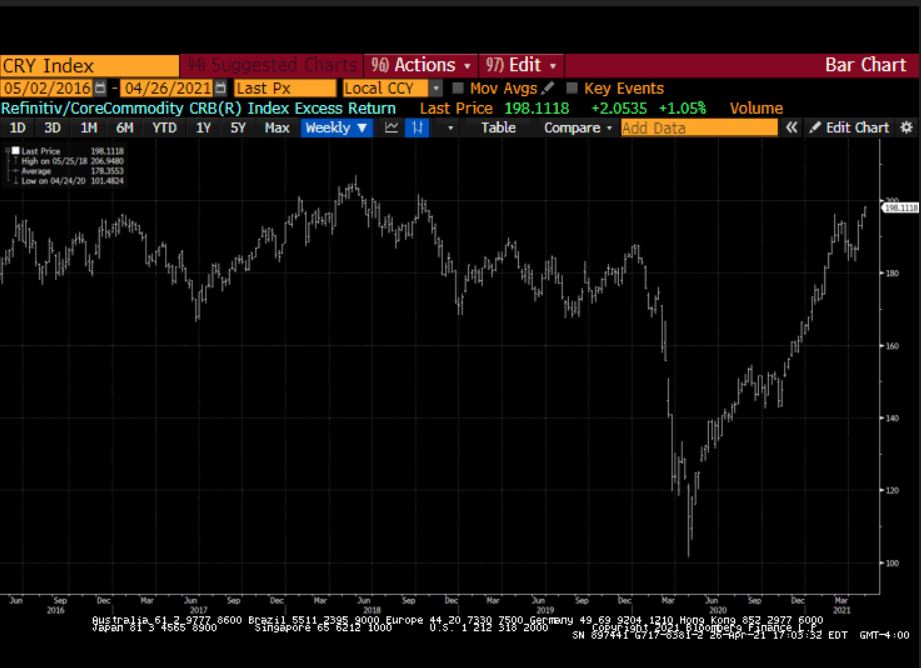 Last year, as the Chinese economic recovery and inventory levels were rebuilt, it was seen as a major driver of industrial metal prices. To be sure, prices of , , , , and prices were at or near highs, fueled by several considerations, but especially the strength of the world’s largest two economies.

However, now the demand for foodstuffs, and , , and , in particular, appear to be rising. Chinese demand is coming as global supplies are thought to be tight, and the weather in Brazil and parts of the US have not been hospitable, though it is still early.

In any event, the next result has been a surge in prices. Prices for these commodities have risen to their highest levels in around eight years. As this chart from Bloomberg shows, the is knocking on the highs from late 2018.

Given the relative size of trade and capital flows, we tend to emphasize the latter in understanding currency movement. However, strong commodity prices are often thought to be expressed in the foreign exchange market by the outperformance of the dollar-bloc currencies among the majors. Still, an interesting NBER working paper (2008) by three professors found that, on the contrary, commodity currencies can predict commodity prices rather than the other way around.

South Korea reported stronger than expected growth. The 1.6% quarter-over-quarter expansion topped the median forecast in Bloomberg’s survey of 1.1%. The economy grew by 1.2% in Q4 20. The growth in the first part of the year was strong enough to lift the output of the South Korean economy above where it was at the end of 2019, pre-pandemic. It is a notable achievement and speaks to strong regional recovery.

The dollar appears to have bottomed against the Japanese at the end of last week, near JPY107.50. Yesterday’s bullish candlestick has seen follow-through dollar buying today in the local session and in early Europe. It was at a five-day high near JPY108.40. The first important technical hurdle is in the JPY108.80-JPY109.00 area, but there is a $1.4 bln option struck at JPY108.75 that expires today.

Meanwhile, the greenback moved in a narrow range against the , despite the 92.3% increase (year-over-year) in (down from 179% in the Jan-Feb period), bolstered by the base effect. The dollar initially slipped to nearly CNY6.48, its lowest level since mid-March, before recovering to post a minor gain.

If sustained, it will be only the second session the dollar has risen against the yuan since Apr. 9. The volatility of the offshore yuan () slipped below 3.9% to its lowest level since January 2020. The PBOC dollar fix was at CNY6.4924, in line with expectations.

The divergence meme, we expect, to gradually become its opposite. The eurozone and Japan may be a quarter or so behind the US and UK in vaccinating their populations, the way it looks now, though, the situation is fluid. The German government revised up its growth forecast to 3.5% this year from 3.0%.

It is cautious about growth next year and sees it only slightly better at 3.6%, though up from 2.5% from its previous forecast. The Bundesbank’s current forecasts are 3% for this year and a more optimistic 4.5% next year. The latest EC forecasts see it at 3.2% and 3.1%, respectively.

Sweden’s Riksbank acknowledged that the pandemic requires continued strong . Still, the economic outlook is improving and anticipates the economy will “approach a more normal level towards the end of the year.” It maintained its SEK700 bln (~$83 bln) bond-buying program, of which it has spent almost SEK500 bln.

During Q3, it will buy mostly covered bonds. Still, it lifted this year’s economic forecast to 3.7% from 3.0%. Growth alone, however, will not get it to tighten monetary policy. It does not see its 2% target being achieved until early 2024.

Separately, the Riksbank is thought to be among the leaders in developing a digital currency. However, no one suggests that a digital krona will compete with the euro as they do about a digital yuan and the dollar. The use of coins and notes has fallen in Sweden and has not been replaced with crypto but with electronic payments. As we have argued, a digital currency is more about a payment system than a new currency, per se.

The upside momentum that had carried sterling through $1.40 early last week has faded, and it continued to be choppy within last Thursday’s range (~$1.3825-$1.3950). The focus was not so much on the CBI retailing report but revelations about the government’s pettiness and callous political calculations from former adviser Dominic Cummings. The timing, ahead of next week’s local elections is unlikely to help the Tories’ cause.

Don’t be misled by February’s disappointing report. It is a volatile series, and we already know February was a difficult month. Remember, slumped 3.0% (the Bloomberg survey median forecast was for a 0.5% fall), and dropped by 2.2% (median projection in Bloomberg’s survey was for a 0.3% rise).

The US reports February house price indices, the Conference Board’s April , and the . None of which are market movers typically, and especially ahead of the outcome tomorrow of the FOMC . While no change in policy or stance is expected, of course, there may be subtle word cues in the that recognizes that the economy and job growth are accelerating.

Progress toward the Fed’s targets is being made. Although we suspect it will be significant by the June meeting, the focus is for a signal about tapering is expected at either the Jackson Hole confab in late August or the September FOMC meeting.

Canada’s minority government survived a vote of confidence over its first formal budget in two years yesterday. Its calendar is light today ahead of tomorrow’s February report.

Last week’s hawkish central bank statement has seen the approach the multi-year high set in mid-March, but it appears to be stopping just shy of it. The US dollar set a low on Mar. 18 near CAD1.2365. It got down to CAD1.2385 yesterday and is in a narrow range straddling CAD1.24 so far today. The first chart hurdle is near CAD1.2440.

Mexico reports its March today, and it is expected to have widened from $2.6 bln in February to around $3.5 bln. In March 2020, the trade surplus was a little more than $3.3 bln. Weak domestic demand and a booming US economy appear to be the main drivers.

The sharp downside momentum of the dollar, which has been in decline from near MXN21.00 on Mar. 23-24 to MXN19.7850 last week, has snapped, and a consolidation tone with the has emerged. The MXN20.00 level offers initial resistance, then the MXN20.07 area.

US DOLLAR OUTLOOK: FX IMPLIED VOLATILITY MUTED AHEAD OF FOMC RATE DECISION US Dollar has struggled throughout the month of April as bears unwind prior gains Federal Reserve dovishness looks likely to continue weighing down […]

Market appetite improved yesterday and today in Asia, perhaps due to a report that US President Joe Biden will seek USD 6trln in federal spending for the 2022 fiscal year. today, market participants are likely […]

Bitcoin (BTC/USD) and Alt-Coin Analysis and Charts: The daily Bitcoin chart is starting to look positive. ‘Wash Out’ zone needs to be overcome if the rally is to continue. Bitcoin (BTC/USD) is leading the cryptocurrency […]

Japanese Yen Talking Points USD/JPY trades to a fresh weekly high (110.17) as longer-dated US Treasury yields recover ahead of the Federal Reserve interest rate decision, and fresh projections coming out of the central bank […]