Equities pulled back yesterday and today in Asia, perhaps as investors turned cautious ahead of tomorrow’s meetings, for which there is some speculation that officials will scale back their monthly PEPP purchases. As for today, we have another central bank deciding on monetary policy today, ahead of the ECB, and this is the . With Canadian data coming on the soft side, it will be interesting to see whether policymakers will delay their future tapering plans.

The traded higher against all the other major currencies on Tuesday and during the Asian session Wednesday. It gained the most versus , , and in that order, while it eked out the least gains versus , and . 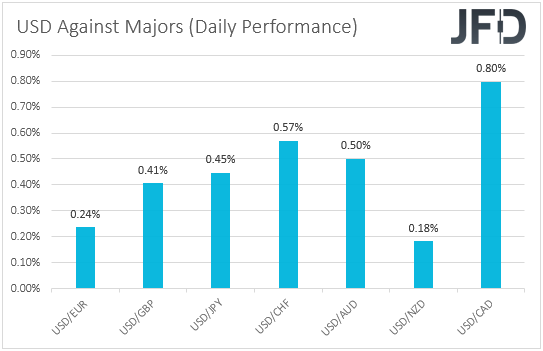 The strengthening of the US dollar and the weakening of the risk-linked Loonie and Aussie suggest that markets may have traded in a risk-off fashion yesterday and today in Asia. However, the weakening of the franc and the fact that the Kiwi lost the least ground point otherwise. Thus, in order to get a clearer picture with regards to the broader market sentiment, we prefer to turn our gaze to the equity world.  There, major EU and US indices traded in the red, with the only exceptions being Spain’s and Wall Street’s , which gained somewhat. The soft appetite rolled over into the Asian session today as well. Although Japan’s kept drifting north following PM Suga’s decision on Friday to step down, China’s , Hong Kong’s , and South Korea’s all slid. 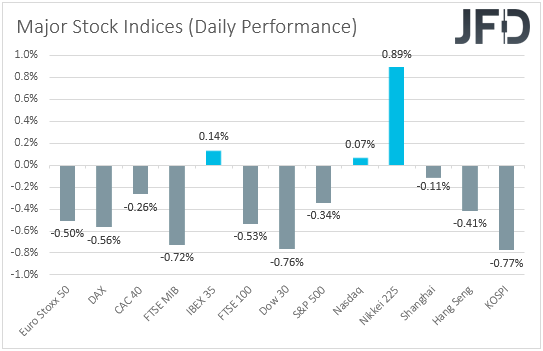 With no clear catalyst behind the pullback, we guess that investors may have adopted a cautious stance as we get closer to the ECB meeting, scheduled for tomorrow. With the economic recovery gathering pace in the Eurozone and inflation accelerating to a rate not seen in the past decade in August, some officials believe that they should consider gradually scaling back their programs, especially the PEPP (Pandemic Emergency Purchase Program). Thus, it will be interesting to see whether we will get a tapering decision this week or not. They may not rush into any final decision at this gathering, as they may prefer to wait for a while more to see what happens with the pandemic and its new mutation after the summer. But, even if they do decide to scale back the pace of monthly PEPP purchases at this gathering, they may compensate by making more purchases through other schemes.

has been slowly grinding higher since Monday, staying above the upside support line drawn from the low of Aug. 20. As long as the rate continues to trade above that line, we will maintain a positive stance.

Currently, the rate is approaching the 130.73 level, marked by Friday’s high, the break of which would confirm a forthcoming higher high and may initially target the peak of July 13th, at 131.10, the break of which could carry larger bullish implications, perhaps paving the way towards the 131.85 zone, marked by the high of July 6.

On the downside, the move that could change the short-term outlook to a negative one may be a dip below 130.24. This will not only confirm the break below the upside line, but also a forthcoming lower low. The bears may get encouraged to dive towards the 129.60 barrier, which is the low of Aug. 31, the break of which could extend the decline towards the low of Aug. 26, at 129.15.

Will The Bank Of Canada Hint A Tapering Delay?

As for today, ahead of the ECB, another central bank is scheduled to decide on monetary policy, and this is the BoC. Last time, Canadian policymakers appeared less hawkish than expected, saying that they continue to see the output gap closing in H2 2022, which suggests that their expectations over when they may start raising interest rates have not come forth. What’s more, both the and Canadian inflation rates for July declined, the for the month fell short of its own forecasts, and data for Q2 revealed a contraction. All this added credence to the Bank’s view and raises questions as to whether officials will appear more dovish today. 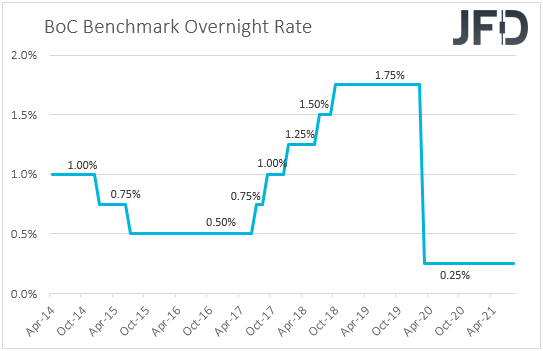 As for our view, we don’t expect any policy changes or bolt statements at this gathering, as, on Sept. 20, the nation’s federal elections are planned. What’s more, this will be one of the Bank’s smaller meetings, without any updated economic projections, neither a press conference by the Bank’s Governor. Such a gathering will take place in October, with market participants expecting to see whether the Bank will announce another tapering step. However, with the data coming on the soft side, this may not be the case and we may get clues on that at today’s gathering.

The Canadian dollar was in a recovery mode from Aug. 20 until yesterday, mainly driven by the weakening US dollar and the recovery in prices. However, with oil prices correcting lower in the end of last week, and the US dollar rebounding yesterday, the supportive factors may be off the table for a while, and this was evident by the fact that the Loonie was found as the main loser among the majors today. Thus, clues that the Bank may delay additional tapering in October could encourage some more Loonie selling.

edged north after hitting the upside support line drawn from the low of Aug. 23, and then, it emerged above the 0.8970 zone, thereby confirming a forthcoming higher high. In our view, this paints a positive picture, at least with regards to the near-term outlook.

At the time of writing, the rate looks to be heading towards the round figure of 0.9000, where a break could set the stage for advances towards the peak of Apr. 20, at 0.9060. If the bulls are not willing to stop there either, then we could see extensions towards the 0.9110 zone, defined as a resistance by the high of Mar. 11.

Now, in case we instead see a dip below 0.8920, we will start examining a bearish reversal as such a move would confirm a forthcoming lower low on the 4-hour chart. The pair may then fall towards the 0.8870 or 0.8855 barriers, marked by the low of Sept. 1 and the inside swing high of Aug. 27 respectively, where another break could open the gates for declines towards the low of Aug. 30, at 0.8805.

The only major data point on the economic agenda is the API () report on crude oil inventories for last week, but as it is always the case, no forecast is available.

We do however have several speakers, including New York Fed President John Williams and ECB Supervisory Board member Elizabeth McCaul. We will also get to hear from BoE Governor Andrew Bailey, who is scheduled to testify on the latest quarterly Report.

Why Complacency Isn’t Killing This Bull Market; The Biggest Risk To Bitcoin

The slipped modestly following Monday’s open, but fortunately, it found good support near 4,150 and eventually closed near the intraday highs. Monday ultimately finished a quarter of a percent in the red, but more importantly, […]

The Man Who Solved the Market: How Jim Simons Launched the Quant Revolution

Price: NEW YORK TIMES BESTSELLER Shortlisted for the Financial Times/McKinsey Business Book of the Year Award The perfect gift for the avid reader on your list: the unbelievable story of a secretive mathematician who pioneered […]

SHIB price dropped roughly 16% in Friday’s trading session due to Musk’s cryptic tweets. Regardless of the minor sell-off, the Adam and Eve pattern for Shiba Inu remains safe. A convincing close above $0.0000109 could […]