Looking at a select set of recent economic releases suggests the US economy is humming along, providing room for the Federal Reserve to let current monetary policy glide forward on autopilot. But a closer look at key trends in the Treasury market and the monetary base – along with the economic challenges roiling China and increasingly spilling out to the global economy – suggest the future may be more uncertain and risky than widely assumed with respect to evaluating the case for rate changes.

The expected bias for standing pat (defined as a 50%-plus probability estimate for no change) extends out to the June meeting, when the current estimate is pricing in a 53% probability of leaving the target rate unchanged. The rate-cut probability rises above 50% for the first time for the July meeting. The question is whether events are unfolding that will change the calculus (in the market and at the Fed) in favor of cutting sooner rather than later?

For some perspective, let’s consider several factors on the short list, starting with a broad look at the US economic trend. Recent data in the critical employment and consumer corners certainly look relatively encouraging. Private-sector hiring picked up in January: companies hired 206,000 workers, a solid gain by the standards of recent history. Retail sales in January also posted a healthy advance, rising 0.3% — the fourth straight monthly gain.

The upbeat numbers offer support for thinking that US economy remains in a moderate growth mode. True, the outlook for first-quarter GDP growth has dipped (based on the median nowcasts for several models). But even taking this GDP estimate at face value suggests the early 2020 profile continues to imply a continuation of the modest growth in the second half of last year.

But there are hints that Fed policy, beyond the glare of the usual data releases, is slowly but persistently shifting toward a dovish bias. Consider, for instance, that the real one-year change in the monetary base – a.k.a. high-powered money or M0 money supply – posted a gain in January for the first time in nearly two years. That’s just one piece of policy trends, but it’s a sign that the modestly hawkish bias of late continues to fade. 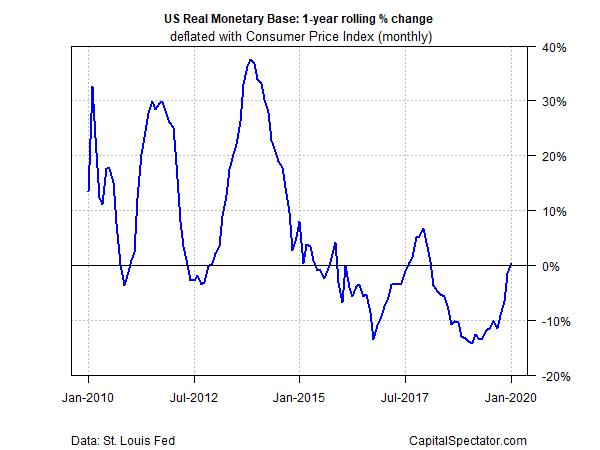 US Real Monetary Base

Adding to pressure on the Fed to ease policy is the return of a negative yield curve in the Treasury market. The widely followed 10-year/3-month spread continues to flirt with sub-zero readings this month and yesterday slipped to -0.03 basis points (Feb. 18). It’s unclear how or if this inversion will affect Fed policy, but if the spread stays negative it’ll be one more factor pushing for a rate cut in a bid to “normalize” the curve, which tends to be one of the central bank’s objectives through time.

The elephant in the room is China and its ongoing struggles to contain the coronavirus that’s roiling the country. The US is relatively immune, at least so far. But as the virus crisis in the world’s second-largest economy rolls on, the economic reverberations (along with the human toll) continue to spill out to the wider world.

There are hints that the virus may have peaked in China, which may be a reason why the hardest hit industrial cities in the country are starting to restart production after weeks of shutdown. Morgan Stanley (NYSE:), writing in a research note, advises that “macro and micro data suggest production activities are resuming at a slow pace in China, reaching 60-80% of normal levels by end-Feb and normalizing only by mid-to-late March.” But the bank adds that “if the spread of the virus is not contained within the next two weeks, the disruption to production could extend into the second quarter.”

The potential for a downside surprise, however, can’t be ruled out, warns The Economist Intelligence Unit (EIU), as reported by CNBC:

Public frustration could “escalate dangerously” if the outbreak proves to be uncontrollable by the end of March, EIU wrote.

It said the economic costs of China’s shutdown as it seeks to contain the epidemic will be apparent at that point.

It’s unclear how the Fed would react, if at all, to a higher level of economic crisis in China, although such a change for the worse would certainly add to pressure for easing policy.

Perhaps the deciding factor is how the incoming US data hold up… or don’t. For now, there’s still a convincing case for expecting the modest growth will prevail for the American economy. But the data published to date has yet to fully reflect the blowback from China. As such, the numbers in the weeks ahead deserve close attention for assessing how or if the modest US growth trend has been affected.

On that front, keep a close eye on this Friday’s February PMI sentiment data for the US (due on Feb .21). The US (published by IHS Markit), a GDP proxy, is expected to dip slightly to 52.5 from 53.1 in January, according to Econoday.com’s consensus point forecast. That still reflects a mild expansion, albeit one that’s getting closer to the neutral 50 mark that separates growth from contraction.

With traders hyper focused on the and earnings from top-tier technology companies, this month’s Federal Reserve is running a bit under-the-radar. That said, President Trump made sure to remind us all of the event earlier […]

DeFi lending platform, Aave, has launched the provision of creating selective credit lines via Delegating Credit (DC), thereby reducing the need for collateral for loans. Stani Kulechov, the CEO and founder of Aave Lending tweeted, By […]

Led by DeFi, DApp Usage Soars Into the Millions

USD/JPY is trading 0.18% higher on Tuesday in a mixed session for the dollar. The price is hovering around 107.50 which is a previous support zone. USD/JPY 1-hour chart The greenback is having a mixed […]

Kenya’s local cryptocurrencies are helping communities survive the coronavirus crisis. One example is the recently-launched Sarafu, which is used alongside the Kenyan Shilling to make payments locally. Crypto Industry is Not Only About Speculation The […]

Canadian Dollar Price Outlook: USD/CAD mounted a large rally early this week, but still remains within its recent range NZD/CAD appears to be in the early stages of a break out, a possibility we identified […]