Get Your Free Equities Forecast

European indices are struggling to get back on track after a bit of a shakedown in yesterday’s session as the reflation trade seemed to take a pause amid a stellar performance from the tech-heavy Nasdaq. This sudden halt to the rotation out of tech and into value stocks that will benefit from a rise in yields and inflation seems to be just that, a pause for the Nasdaq to catch its breath before the correction continues.

How to Manage the Emotions of Trading

The performance in equity markets continues to prove that stocks are having a delayed reaction to the bond market – remember it took about a week for stocks to start their selloff after the rapid rise in yields – given that the busiest days for equities seem to come during relative calmness in the bond market. If we look at yesterday, when Tesla shot up around 19%, the US 10-year yield was only marginally lower, about 5 bps from the high seen on Monday.

Focusing on Spain, the IBEX 35 is still holding on to the strong uptrend since the beginning of February, finding continued support on the rising trendline. Monday’s push higher was able to break above the 61.8% Fibonacci at 8,450, cementing even further the bullish trend in the index, and this level is now acting as short-term support. The momentum indicators are showing that further upside is still possible before overbought conditions are strong enough to pose a threat, so I expect the IBEX 35 to try and attempt to reach the next resistance at 8,625.

Continuing the trend we’ve seen in the last year, the next Fibonacci level to keep an eye out for is the 76.4% at 9,075, but it is likely that we drift horizontally within the 61.8% and 76.4% before we see an attempt to break higher, given how the rise from the 50% Fibonacci to current levels has taken over a month to consolidate. To the downside, I expect the ascending trendline to continue offering good support around the 8,340 area if the 8,450 Fibonacci level doesn’t hold.

Fibonacci for a Multi-Market Trader’s Approach

The health situation in Spain is improving rapidly, with the national average infection rate per 100,000 having fallen below 150 from over 400 less than a month ago, and this strong descending tendency seems set to continue. The local government has decided to restrict movement within the country for the upcoming Easter holiday but hasn’t yet decided whether to cancel international travel to the country, meaning that a resident in Spain could be prohibited from traveling over state lines but a foreigner could fly into the Balearics or Canary islands, something which has been well received by the insular governments as they attempt to rebuild their main source of income.

Overall, the country seems to be in a strong position to continue improving its situation and aim to regain some normalcy for the upcoming summer season. The government has set a goal to have 70% of the population vaccinated by the end of the summer in hopes of increasing travel to and from the country, although some of the new variants still pose a threat and have lead to some hotspots in the mainland. 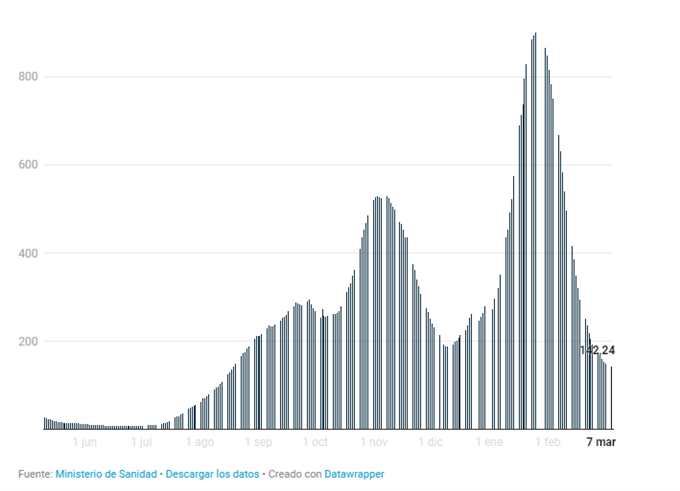 Bulls counting on a break of symmetrical tringle resistance

AUD/USD monitored for a bullish breakout of the symmetrical daily triangle.  4-hour W-formation’s neckline will be eyed for a test and a subsequent demand area within the triangle.  AUD/USD’s medium-term outlook is bearish considering the […]

GBP price, news and analysis: GBP is looking strong all round after Andrew Bailey, Governor of the Bank of England, warned Monday of the possibility of rising inflation as the UK recovers from the economic […]

The blockchain-based payment processor has registered another win in its ongoing legal battle against the US Securities and Exchange Commission. The Judge ruled in favor of Ripple by dismissing SEC’s request to access Ripple executives’ […]