Economic activity in the fourth quarter edged higher in the latest round of estimates, based on the median for a set of nowcasts compiled by The Capital Spectator. Output is still on track to slow vs. previous quarters, but new data point to a mildly firmer increase. 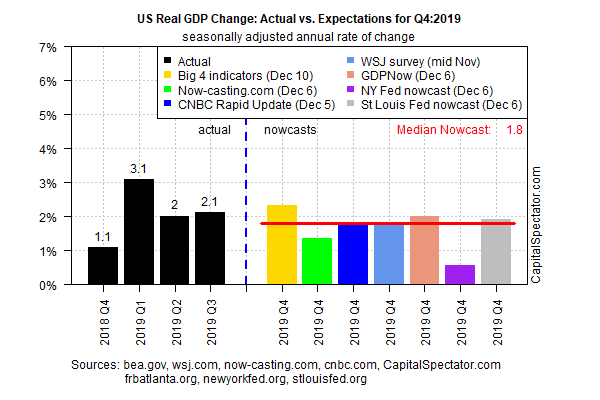 Today’s revised Q4 estimate continues to reflect a borderline sluggish expansion, although the current nowcast marks a modest improvement over the 1.5% estimate That’s a sign that a degree of strengthening may be underway.

Hints of firmer economic activity are also found in the latest PMI survey numbers compiled by IHS Markit. “With both services and manufacturing reporting stronger rates of expansion, the November PMI surveys indicate the fastest pace of economic growth for four months,” Chris Williamson, the consultancy’s chief business economist, said last week. “The improvement is coming from a low base, however, and even at these higher levels the survey is merely indicative of annualized GDP growth in the region of 1.5%.” 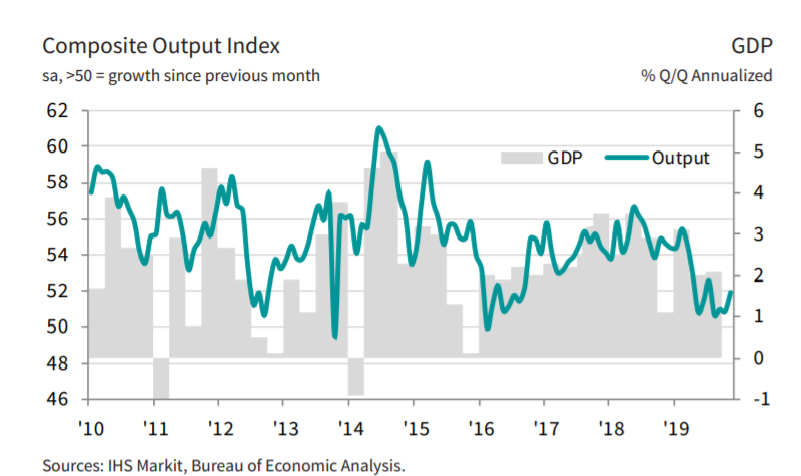 Last week’s surprisingly strong gain in in November provided fresh support for optimism. “This is a blowout number and the US economy continues to be all about the jobs,” advised Tony Bedikian, head of global markets for Citizens Bank in a research note. “The unemployment rate is at a 50-year low and wages are increasing. Business owners may be getting more cautious due to trade and political uncertainty and growth may be slow, but consumers keep spending and the punch bowl still seems full.”

Another bright spot is highlighted in the year-over-year outlook for GDP growth through Q4, based on The Capital Spectator’s average point estimate via a set of combination forecasts. Today’s projection sees output ticking up to 2.2%, fractionally above the 2.1% increase in Q3. Note, however, that the slowdown in growth is expected to resume in 2020. 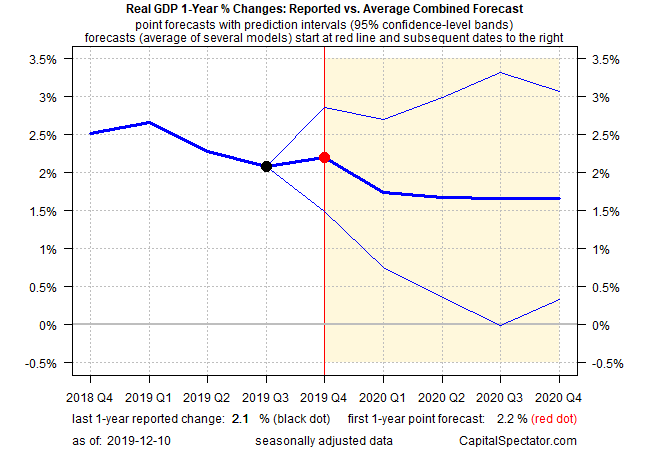 Slow growth, in short, is still the baseline forecast, but for now, it appears that the recent downshift is stabilizing and perhaps edging higher. Recession risk, in other words, still appears to be a low-probability event for the near term, as noted in a

The next stress test for today’s modestly improved outlook: this Friday’s retail sales report for November (due on Dec. 13). Economists are expecting a healthy 0.5% increase in headline spending, based on Econoday.com’s consensus point forecast. If the crowd is right, the US macro outlook for Q4 will continue to strengthen.

Hello traders, made a bullish run last month, which found a temporary top around the 1.118 area, and from where price started slowing down for a temporary a-b-c correction. We can see that this a-b-c […]

remain on the defensive on Monday, nursing losses for a sixth day in a row, as traders continue to react to de-escalation in geopolitical tensions between the United States and Iran. Amid profit taking, was […]

Poland’s national payments provider has for almost three decades been pro-digitalization of all banking transactions. Now, due to force of circumstance, Poland could well become a very efficient and lucrative place for FX brokers to […]

Bitcoin (BTC) and the general cryptocurrency markets are yet to fully recover from the massive sell-off on March 12, which left traders and hodlers scratching their heads as they watch the entire gains so far […]