The second half of this weeks sees the and the date that the UK leaves the EU.

Following Boris Johnson’s Brexit Bill’s rapid passing through UK Parliament, the EU Parliament will vote on the bill tomorrow, no surprises are expected. The UK will leave the EU on Friday 31st January. The focus will then shift firmly onto difficult trade talks between the UK and EU. The two sides will have until the end of the year to hammer out a trade deal. Failure to reach an agreement means the UK will endure a hard, no deal Brexit.

The will continue to act as a fear gauge of a no deal Brexit. Today the pound is falling in part owing to comments by Chief EU negotiator Michel Barnier that a disorderly Brexit is still an option.

Data has been mixed. Retail sales earlier in the month disappointed, whilst more recently labour market data and PMI’s surprised to the upside, making traders scale back their expectations of a rate cut. The market is pricing in a 50 / 50 probability of rates being slashed on Thursday.

With a 50% chance of a rate cut from BoE coupled with fears of a no deal Brexit the pound is under pressure.

The safe haven has found support amid growing concerns over the spread of China’s deadly coronavirus and the potential economic impact of the outbreak on global growth and trade.

With no UK macroeconomic data due today, attention will move to US durable goods orders later today. Expectations are for a rebound in durable goods, increasing 0.9% in December, up from -2.1% decline in November.

A move through the 50 sma this morning has triggered further selling. is testing trend line support. A meaningful break through here and through immediate support at the kept $1.30 psychological level could open the door to support at $1.2950 prior to December low of $1.29. 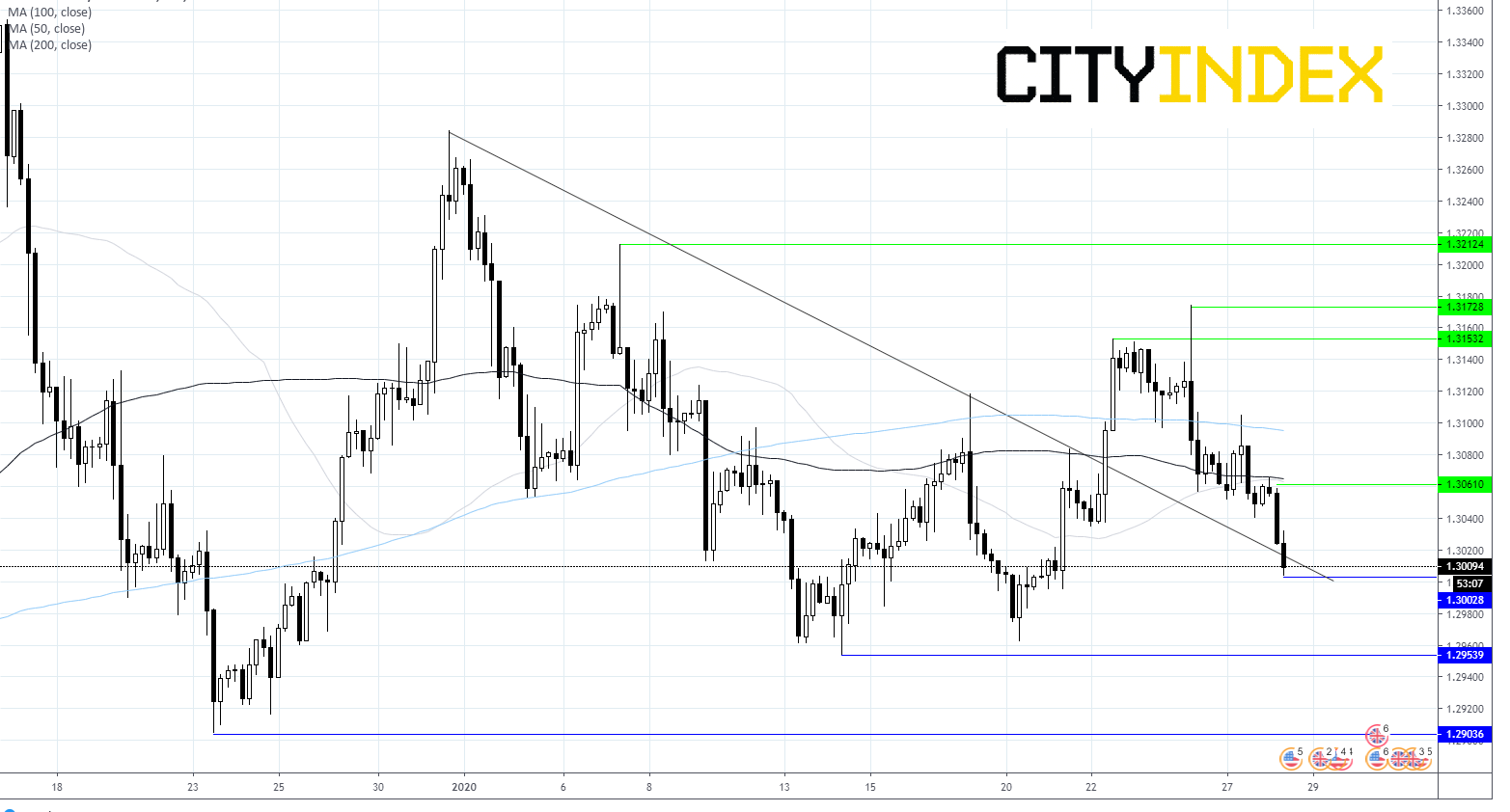 traded lower today, breaking below the 1.3015 support zone, marked by Thursday’s low. The pair has been printing lower highs and lower lows since December 31st, while also trading below the downside resistance line drawn […]

Australian Dollar Talking Points AUD/USD struggles to hold its ground ahead of the Reserve Bank of Australia (RBA) interest rate decision, and the exchange rate may exhibit a more bearish behavior over the coming days […]

Brexit Defeats for Johnson in House of Lords

GBP price, Brexit news and analysis: The probability of a cut in the benchmark UK Bank Rate on January 30 has risen to more than 64%. UK Prime Minister Boris Johnson has been defeated three […]

The price is struggling ahead of the 0.70 psychological level

AUD/USD is trading 0.50% higher on Monday with only the EUR performing better from the G6. The market has hit some resistance at the 0.6981 level. AUD/USD 4-hour chart AUD/USD is performing very well on […]

If the S&P breaks through the 3,155.75 support it could spell trouble

The S&P gapped higher on Monday and trades 1.54% higher on the session. The price has broken through an important resistance but will it hold. S&P 500 4-hour chart Looking at the S&P 500 chart […]

The cryptocurrency market kicked off the week with an explosive start, as investors injected $7 billion since the weekly candlestick open. The cash flood pumped Bitcoin, Ethereum, and XRP. Different metrics also show these top […]

We look at the markets live together everyday. You can join the telegram group and be notified daily when we go live at 9am EST Monday-Friday https://t.me/ConquerTrades TradingView for chart analysis and I trade S&P […]