There are only three more Federal Reserve monetary policy announcements before the end of the year. If Fed Chairman Jerome Powell wants to give the market ample time to prepare for tapering asset purchases, the central bank will need to make some type of announcement tomorrow. There’s no doubt that the topic of taper will be addressed, most likely during the press conference. The one question that will determine how the market responds is the taper start date.

The only thing market participants want to know from the Fed on Wednesday is whether it will provide a specific taper start date. For the past few months, it was widely believed that it would lay out a precise plan to reduce asset purchases in September. At its last meeting in July, the Fed said the criteria for providing ample notice had not been reached. In August ,at Jackson Hole, Powell said the central bank is likely to begin tapering before the end of the year, but added there is still “much ground to cover to reach maximum employment,” which is seen as the criteria for a rate hike.

All this hesitancy to begin the taper process was before the most recent disappointments in non-farm payrolls and inflation. The latest downside-data surprises, along with heightened market volatility, almost assures that the Fed will not provide any specific guidance tomorrow. Instead, it will probably acknowledge that economic activity has eased but express confidence in the recovery. Powell should confirm that he still expects taper to begin this year, but it is too soon to decide if it should begin in November or December.

Quite frankly, November or December doesn’t really make too much of a difference. And if the Fed wanted to be a bit more precise, it could. Trading the FOMC rate decision will be tricky because it is a two-part announcement. At 2 p.m. ET/18 GMT, the FOMC statement, economic projections and dot plot will be released. At 2:30 p.m. ET/18:30 GMT, Powell begins his press conference. If there’s any guidance on taper, it will happen then. 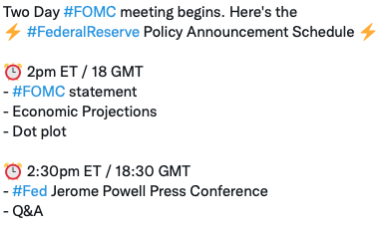 Economic projections and the dot plot will give the first clues as to where the central bank stands.

In July, when the last projections were released, seven policy-makers favored a rate hike next year, with two of those looking for more than one hike.

If either of those numbers increase, the U.S. dollar could pop higher. The reaction should be sharp and brief. Inflation forecasts are expected to rise but growth projections should remain unchanged.

Then comes Powell’s presser, which is the wild card. Investors will be disappointed if no precise start date is provided and the U.S. dollar should weaken initially.

However, at the end of the day, if the main takeaway is that the Fed still thinks taper will begin in 2021, a few more months won’t make too much of a difference. If that is the case, we won’t see a long lasting durable sell-off in the U.S. dollar.

The Bank of Japan also meets tonight (before the FOMC), but no changes are expected. Growth is slightly better, but inflation is still very low. The remains under pressure after the Reserve Bank minutes confirmed that the central bank sees interest rates remaining unchanged until 2024, which would put them far behind the U.S., U.K., Canada and New Zealand.
(Visited 3 times, 1 visits today)

Fitful price action last week made a 7-year high at $77 on Tuesday, then tumbled ~$6 into Thursday’s low but bounced back $4 by Friday’s close. Crude Oil Daily Chart Prices on the long bond […]

Central Bank Watch Overview: Markets are expecting a hawkish FOMC when the September Fed meeting concludes on Wednesday. Eurodollar contract spreads and the US Treasury yield curve continue to behave in a similar manner to […]

S&P 500, Nasdaq Talking Points: The morning after the Fed has produced some robust moves in markets, with both stocks and bonds putting in a notable leap. Yesterday’s FOMC outlay was messy with the bank […]