Gold is up nearly 4% since the last US non-farm payrolls report from early April when the March employment report showed a huge 916k jobs added to the economy. Now, as the April employment report bears down on markets less than 48 hours away, XAU/USD appears to be moderating following volatile price action over the last few days.

The reason for gold’s recent volatility surge? None other than US Treasury Secretary Janet Yellen. The former Fed Chair turned Treasury Secretary initially appeared to suggest interest rates may need to rise to keep up with the economy. The offense turned out to be a miscommunication, which she later in the day corrected, causing gold prices to recover from the slump Ms. Yellen imposed on them.

Prices appear to have stabilized Thursday as investors prepared for the highly-anticipated non-farm payrolls report later this week when analysts expect the nation to add 978k jobs, according to the DailyFX Economic Calendar. A better-than-expected print would likely increase confidence in the economic recovery and perhaps also add more upside pressure to inflation expectations.

Speaking of inflation expectations, markets are betting for higher inflation in the coming years, evidenced by the 5-year breakeven rate (calculated as the difference between the 5-year Treasury inflation-indexed yield and the nominal yield of the same maturity) reaching the highest mark since 2008. That said, markets expect higher inflation is on the way in 5 years. The Federal Reserve is also expecting a near-term pickup in prices.

However, the Fed believes the pickup in inflation will be temporary, or as Chair Powell likes to say, transitory – perhaps his favorite word if not one of his most remarked. In fact, a litany of Fed members reinforced that belief, showing somewhat of a consensus view among themselves. These transitory inflation adherents succeeded in convincing markets of that view or more likely convincing markets that they strongly believe so and will act accordingly – which means doing nothing initially given the Fed’s policy of “average inflation targeting” and the preceding discussed ideological stance consuming Fed members.

According to the CME Group’s FedWatch Tool, the expectations for a rate hike in December dropped from 14.0% to 9.0% over the last day. That said, market-based inflation expectations such as breakeven rates are likely not swaying rate bets with the same consequence as what markets believe the Fed will do when inflation does come. Now, that is not to say this week’s NFP print won’t move gold prices because it likely will. The important puzzle piece, at least one of them, is to pay judicious attention to Fed speak.

Gold has trended higher over the last month, finding itself in the upper range of a broader descending channel. The psychologically imposing 1,800 level sits directly overhead, which has proven to be a formidable resistance level lately. Moreover, a descending 100-day Simple Moving Average (SMA) is bearing down on the current price level. To the downside, however, a 23.6% Fibonacci retracement level along with a 20-day SMA may offer support if prices drop. 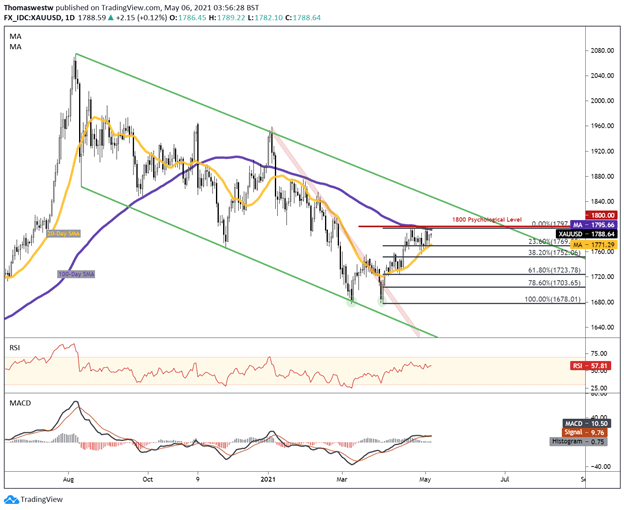 Nasdaq 100 Price Outlook: Nasdaq 100 Awaits NFP Report as Index Threatens Range-Bound Price Action While the Nasdaq 100 has long been the most volatile of the three major US indices, it is not immune […]

Fed Narrative May be Challenged on US PCE, Durable Goods

Coinbase Inc. ($COIN) has finally opened its Prime brokerage services to nearly 9,000 of its institutional investors, after launching the Beta version back in May. While Coinbase continues to rule the retail market, its Prine […]

The 2021 Social Security Trustees Report, which usually comes out in the spring, emerged in the last week in August. That’s not surprising given a new administration and a somewhat more complicated story than usual.  […]