The on-again, off-again US consumer reversed course in May, with Retail Sales falling 1.3% as producer inflation jumped to its highest rate in over a decade. April’s sales total was revised up to 0.9% from flat.

Consumer inflation may be taking a bite out of spending with May’s 5% jump in prices from last year joined by a 6.6% surge in the annual Producer Price index (PPI).

Equities slipped after the reports, while Treasury yields were slightly higher and the dollar lost ground against the majors.

The sales and inflation figures will have scant direct impact on the week’s major event, the Federal Reserve’s two-day meeting which concludes early Wednesday afternoon. The governors will no doubt stay the course on policy and with the contention that recent inflation is a transitory phenomenon.

However, the sales and PPI figures underline the weakening constitution of the US economy and pose difficult problems for monetary policy.

Consumer spending over the past six month has been enabled exclusively by stimulus payments. Over the past half-year Retail Sales have increased an average of 2.3% a month with three positive and three negative results.

Except for the stimulus heavy months of January and March with a combined gain of 18.3%, overall Retail Sales would be lower since last November.

The May PPI increase promises continued price increases in the months ahead as retailers pass on their product costs to the consumer.

Inflation has become the Fed’s main concern. Consumer prices have more than tripled this year, rising from a 1.4% annual rate in January to 5% in May.

While the Fed’s contention that the bulk of these gains are due to the statistical base-effect from last year’s lockdown collapse is correct, price increases are proving more widespread and persistent than expected.

Commodity prices are near a six-year high and West Texas Intermediate (WTI), the North American crude standard, is up 50% this year. 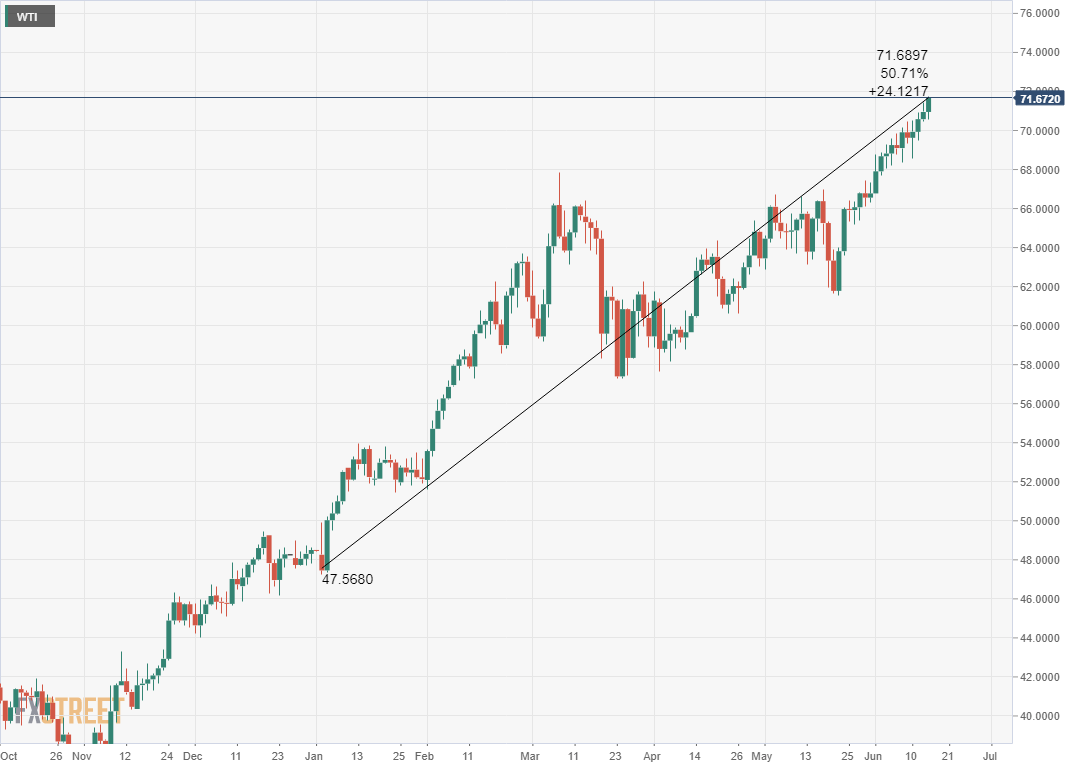 The US economy is rapidly evolving in a direction that puts the Federal Reserve in a difficult bind.

Consumer spending, the mainstay of the American economy, has been supported by massive amounts of deficit financing from Washington. Without those fiscal injections, US consumption would have fallen in the seven months since the election.

Those trillions of printed dollars also contribute to inflation.

Eventually Washington responded, but the monetary spigot has been left wide open and the Fed is in no position to call for it to be closed.

Never have central bankers so seemingly sung from the same hymn sheet as Fed policymakers have in the past few weeks. Having successfully aligned market expectations, the Federal Reserve is almost certain to repeat the […]

USDCAD and Gold Talking Points: The Dollar ended the first half of 2021 with a strong rally, but the fundamental backdrop will make for a difficult environment to foster this recovery Should the Fed’s efforts […]