EUR/USD extends the decline from the start of the week to tag a fresh weekly low (1.1868), and the rebound from the monthly low (1.1847) may continue to unravel as the exchange rate appears to have reversed course ahead of the 200-Day SMA (1.1995).

EUR/USD extends the recent series of lower highs and lows after showing a limited reaction to the Euro Zone Consumer Price Index (CPI), which narrowed to 1.9% from 2.0% per annum in May, and the exchange rate may remain under pressure ahead of the US Non-Farm Payrolls (NFP) report as employment is expected to increase for the sixth consecutive month.

Meanwhile, signs of waning Euro Area price growth may encourage the European Central Bank (ECB) to support the monetary union throughout 2021 as the “new staff projections point to a gradual increase in underlying inflation pressures throughout the projection horizon,” and President Christine Lagarde and Co. may continue to tame speculation for a looming shift in monetary policy as the “Governing Council expects net purchases under the PEPP (pandemic emergency purchase programme) over the coming quarter to continue to be conducted at a significantly higher pace than during the first months of the year.”

As a result, the Euro stands at risk of facing headwinds ahead of the next ECB interest rate decision on July 22 as the central bank relies on its emergency tools to achieve its one and only mandate for price stability, and it seems as though the Governing Council and Federal Open Market Committee (FOMC) are plotting different paths as Chairman Jerome Powell and Co. forecast two rate hikes for 2023.

Meanwhile, the renewed weakness in EUR/USD has spurred a shift in retail sentiment as the IG Client Sentiment report shows 48.74% of traders currently are net-long the pair, with the ratio of traders short to long standing at 1.05 to 1. 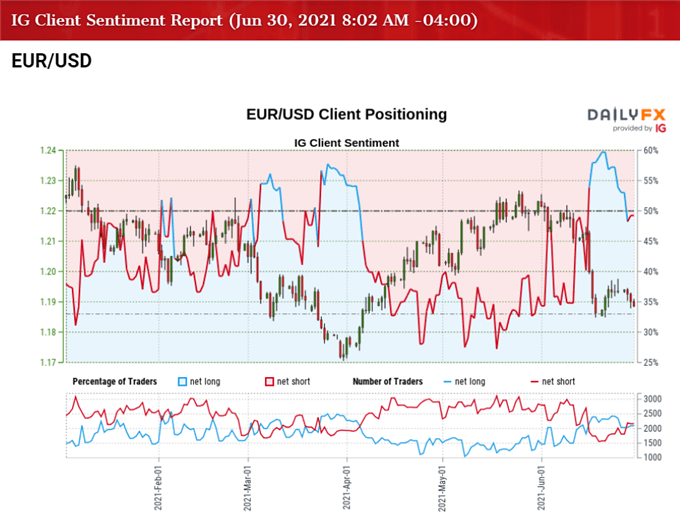 The number of traders net-long is 0.85% higher than yesterday and 17.34% lower from last week, while the number of traders net-short is 2.13% lower than yesterday and 25.26% higher from last week. The decline in net-long position comes as EUR/USD struggles to retain the rebound from the monthly low (1.1847), while the jump in net-short interest has helped to generate a shift in retail sentiment as 59.03% of traders were net-long the pair last week.

With that said, it remains to be seen if the decline from the January high (1.2350) will turn out to be a correction in the broader trend rather than a change in market behavior as EUR/USDappears to have reversed course ahead of the 200-Day SMA (1.1995), and another move below 30 in the Relative Strength Index (RSI) is likely to be accompanied by a further decline in the exchange rate like the behavior seen earlier this month.

EURUSD rebounds in trend moves tell the story of the trend. How can you attack the trend too.

US Dollar Solid as Weak Data Weighs on Risk Assets in Asia. Will EUR/USD Move Lower?

Friday was an outside down bar for . It formed a micro double top with Wednesday’s high.  The rally up until May 19 was a nested wedge, with Friday sending a sell signal bar for the […]