EUR/USD clears the March high (1.2113) as it breaks out of the descending channel from earlier this year, and the Federal Reserve interest rate decision may do little to derail the recent advance in the exchange rate as the central bank is expected to retain the current course for monetary policy.

EUR/USD trades to a fresh monthly high (1.2117) following the limited reaction to the European Central Bank (ECB) meeting, and the exchange rate may attempt to test the February high (1.2243) as long as the Federal Open Market Committee (FOMC) stays on track to “increase our holdings of Treasury securities by at least $80 billion per month and of agency mortgage-backed securities by at least $40 billion per month.”

It seems as though the FOMC is in no rush to scale back its emergency measures as the central bank warns of a “transitory rise in inflation above 2 percent,” and the committee may continue to strike a dovish forward guidance as most Fed officials see the benchmark interest rate sitting near zero through 2023.

In turn, more of the same from Chairman Jerome Powell and Co. may do little to derail the recent appreciation in EUR/USD as the central bank remains in no rush to scale back its emergency measures, and it remains to be seen if the FOMC will alter the forward guidance at its next quarterly meeting in June as Fed officials are slated to update the Summary of Economic Projections (SEP).

Until then, EUR/USD may attempt to test the February high (1.2243) as it breaks out of the downward trend carried over from the start of the year, and the appreciation in the exchange rate may continue to coincide with the renewed tilt in retail sentiment as the crowding behavior from 2020 resurfaces. 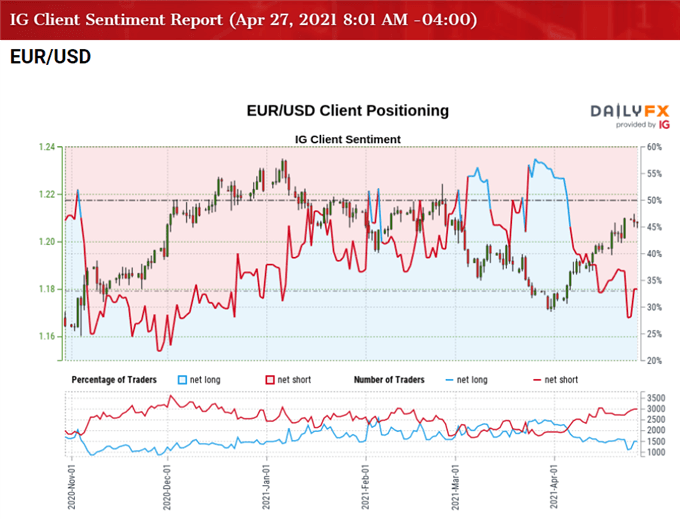 The IG Client Sentiment report shows 34.68% of traders are currently net-long EUR/USD, with the ratio of traders short to long standing at 1.88 to 1.

With that said, the FOMC rate decision may do little to derail the recent advance in EUR/USD as the crowding behavior from 2020 resurfaces, and the exchange rate may attempt to test the February high (1.2243) as it breaks out of the descending channel from the start of the year. 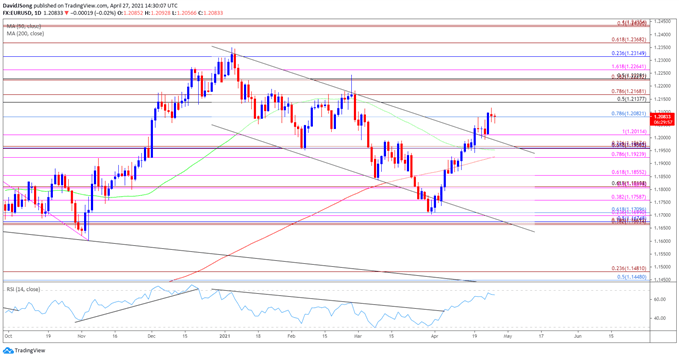 Gold (XAU/USD) Analysis, Price and Chart Multi-week bullish channel under threat A consolidated break higher could open the way to $1,960/oz. The technical outlook for gold remains positive for the coming, especially if the precious […]

CAKE has had awesome week, rising nearly 100%. The bulls heavily grabbed low prices of $23 as cake rebounded like a cannon. Since the dip, the price has been steadily respecting an ascending channel with […]

Ethereum broke the $4,000 level this morning ahead of the upcoming Ethereum Improvement Proposal (EIP)-1559 in July, data from multiple sources show. The world’s second-largest asset by market cap ($470 billion) and is arguably the […]

Equities tumbled yesterday and today in Asia, with most of the benchmark indices falling more than 2%, due to warnings by Chinese regulators that Evergrande’s $305bn worth of liabilities could result in risks to the […]