Elon Musk, the Tesla CEO has responded to the video which was made to look like it was from the famous hacker group ‘Anonymous,’ with a meme. The meme mocked the group’s threat to the billionaire in the most Elon Musk way.

The Anonymous Hacker Group last week had issued a warning against Tesla and Elon Musk over Musk’s continuous Bitcoin bashing and irresponsible crypto tweets. A video surfaced just a few days later which seemed to be from the hacker group as well since it had a similar style with a person in a Guy Fawkes Mask speaking in a digitally altered voice. The video threatened Musk of dire consequences for his obnoxious tweets and said,

“For the past several years you have enjoyed one of the most favorable reputations of anyone in the billionaire class because you have tapped into the desire that many of us have to live in a world with electric cars and space exploration.” “Recently… people are beginning to see you as another narcissistic rich due who is desperate for attention,”

Not even a good fake anonymous “The article is behind a paywall, and it looks like Anonymous’ hacking skills are not enough to get behind it “

Later the Anonymous Hacker Group denied any involvement with the threatening video but continued their attack on Twitter, attaching a blog link and a video with a tweet caption “Is Elon Musk a fraud? Let’s find out”

Is Elon Musk a fraud? Let's find out.

Earlier today Musk tweeted that Tesla would reconsider adding Bitcoin as payment once the mining becomes more environmentally friendly. The tweet came a month after Tesla announced it would no longer accept Bitcoin as a payment for the electric cars due to environmental concerns. Musk’s tweet came in response to pump and dump allegations as his tweets have historically made the price of cryptocurrency move sharply. 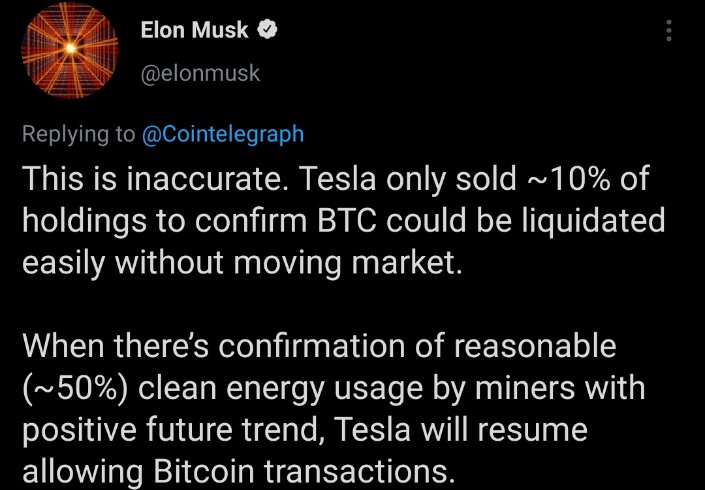 The tweet also resulted in a Bitcoin price jump by nearly 10% reaching above $39,000 after spending the majority of last week in the sub-$35k price range.

Bitcoin (BTC/USD) Price, Analysis and Chart: ‘You can now buy a Tesla with Bitcoin’ tweets Elon Musk Bitcoin better bid (BTC/USD) and looking to push higher. Recommended by Nick Cawley Get Your Free Introduction To […]

Ethereum Price Analysis: ETH Fighting Over $2000 After Crashing 55% In 11 Days

Bitcoin Is Back! Can Elon Musk Drive BTC to $50K?

The price of Bitcoin has climbed back above $40K for the first time in roughly three weeks. The passage over $40K may not have been exactly unexpected. However, after questions arose about whether or not […]