(Thursday Market Open) It’s a busy day for the airlines as three major carriers report and investors wait to hear what they might say about summer travel trends. In the meantime, broader market action looks a little unsettled to start the day without much direction one way or another.

It might be a bit of a wait and see kind of day, but the news is starting to trickle in and a lot of it looks positive. First of all, fell to 547,000 last week, down from a revised 586,000 the week before. It’s a new post-COVID low for this metric, but still about double what we saw before the pandemic. You never want to make too much of one number, but you continue to see the trend move in the right direction and that’s what you want.

If you read this column yesterday, you might remember we suggested that Wednesday could be a test of market sentiment after a two-day pullback. If yesterday was actually a test, it passed with flying colors, with the major indices solidly in the green.

The small-cap index, which had been under more pressure earlier this week than its fellow indices, actually had a great day and rose more than 2%.

While yesterday’s weather was sunny on Wall Street, keep in mind that it followed two days of rain, so basically we’re back to where we started the week. Stocks did see some buying in the final hour yesterday, which can sometimes indicate a chance for follow-through. However, the overnight session featured a bit of weakness, so it’s unclear if spillover buying is in store.

Checking overseas, the European Central Bank (ECB) kept and bond buying unchanged today. Neither is really a big surprise, so it’s probably not a market-moving event.

Earnings continue to drive the day, and so far they’ve been pretty good. Basically, if you beat consensus on revenue, you’re fine, but if a company misses on revenue, they’re getting hammered. People also want to see companies paint a better picture of the future.

What to Watch with Airlines

Earnings today taxi toward the runway, with Southwest Airlines (NYSE:), American Airlines (NASDAQ:) and Alaska Air (NYSE:) all expected to report. Remember to watch what they say about driving down costs in these tough times for the industry, and also check their forecasts for capacity and pricing this summer.

For now, investors have to take what they can get. A good example is shares of AAL rising 2% in pre-market trading today after the airline’s came in pretty much in line with expectations. LUV shares also moved higher in pre-market trading after , and they said their recovery is leisure-driven. The business traveler hasn’t returned.

It was good to hear upbeat talk about the coming months from a couple of airlines that already reported this earnings season, but the picture arguably remains cloudy in the near-term. Travel numbers only averaged about half of their 2019 levels on most recent days, according to government statistics.

Speaking of statistics, investors got a curveball from the Energy Information Administration’s (EIA) weekly crude stockpiles yesterday. It showed a slight build in and supplies after a major draw the previous week. We’re approaching high-demand season with summer on the way, and even though planes remain half full it sounds from media reports like a lot of people plan to take driving trips, so these stockpiles are important to watch for clues into prices.

Crude fell pretty sharply yesterday not just because of the supply build, but possibly because traders are getting nervous about growing cases of COVID in Asia and South America pushing down global demand and prices for fuel. While you never want to see more COVID anywhere, that scenario could potentially mean U.S. drivers paying less to travel than they otherwise would have. (More on crude below).

Airlines may lead today’s earnings parade, but they don’t have Wall Street’s skies to themselves. This morning features AT&T (NYSE:)—a stock in the which gives it some extra meaning. For them, it’s all about subscriber numbers, and they looked . Shares rose in pre-market trading.

Others to look for this afternoon include Intel (NASDAQ:), Seagate Technology (NASDAQ:), Snap (NYSE:), and Mattel (NASDAQ:). Also, how about Chipotle’s (NYSE:) late yesterday? They really crushed it.

INTC is one of the first major chipmakers to and could provide insight into the global supply shortage. INTC is the largest semiconductor company by revenue, but there’s growing concern about competition from companies like Nvidia (NASDAQ:).

The trade media has been full of reports about how INTC might be threatened by NVDA”s recent announcement of a new data center central processing unit (CPU). It wouldn’t be surprising to hear analysts ask INTC about that on their call.

Those companies that meet or beat on revenue and paint a nice picture for the rest of the year are being rewarded. As we noted here yesterday, when a railroad company like CSX (NASDAQ:) is saying they really see for the second half of the year, that’s a really good sign.

It’s these kinds of solid outlooks that appeared to help stocks move higher on Wednesday after some softness early this week. And the market avoided having its first three-session losing streak since early March.

It’s basically hard to fight back against the upward forces, because that means fighting not only the Fed, but also the strong earnings results that keep coming in. You can argue a lot of this was built in, but based on what we saw yesterday it still appears people are stepping in to buy dips.

That doesn’t mean the struggles from early this week are over and were meaningless. The fact is, there are signs of the market getting a bit tired here and having trouble finding new buyers at these high levels without more catalysts. There’s nothing too strange or surprising about that, considering how far we’ve come so fast.

This might be one of those times where it’s best for investors not to go “all in” on stocks, but maybe instead look for under-appreciated parts of the market. Having said that, it’s hard to find a lot of bargains out there when 95% of stocks are trading above their 200-day moving averages, as The Wall Street Journal reported the other day.

One part of the market where you might think some lower prices could be around is Health Care, because it’s the second-worst performing sector (after Staples) so far this year, up a mere 7.5%. However, on Wednesday it looked like investors re-discovered it thanks to strong earnings results.

So far this week, the closely watched Treasury yield is basically staying in its lane, trading near 1.58% this morning. That’s about 20 basis points below last month’s high and not a level too likely to inject fear into growth stocks, assuming recent trading patterns hold. 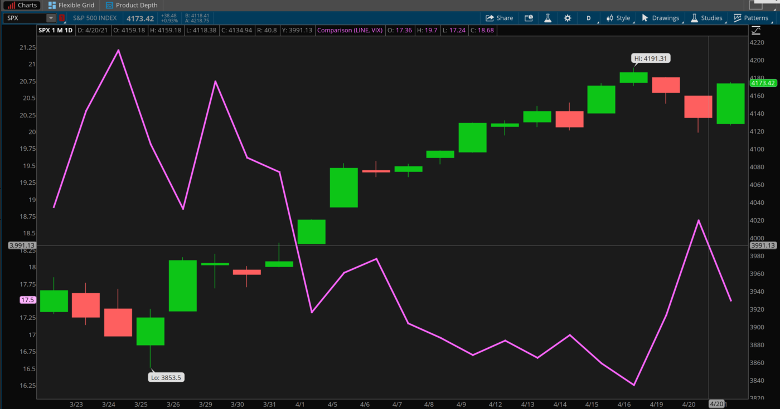 Chart Of The Day: As Expected

While markets, like children, don’t always behave the way they’re supposed to, this chart shows one occasion (now) when they are. The Cboe Volatility Index (—purple line) typically goes higher when the S&P 500 Index (—candlestick) declines, and then relaxes when the SPX moves back up.

The Ups And Downs Of Higher Crude

Crude hit a one-month high above $64 a barrel earlier this week before getting knocked down Wednesday, but it’s still a few dollars below where it might start to cause worry for transport companies. That level is generally seen as around $70.

Remember that crude doesn’t just play nicely in its own sandbox. A sharp rally could make life hard for many companies out there, even “stay at home” ones like Walmart (NYSE:) and Amazon (NASDAQ:), thanks to their vast supply chains that rely heavily on cheap energy supplies.

Stay tuned on that particular commodity, along with (an important component of many technology and electric vehicle products) and (homebuilders use a lot of it).

Having said that, the upside (no pun intended) of higher crude prices is that they can often be a signal of growing economic demand around the country. Remember, it was about a year ago when crude had an unprecedented meltdown with demand in the gutter and the world locked down.

On The Home Front:

The week concludes today and tomorrow with some updates on housing. First we get March later this morning, then March tomorrow morning. While higher home prices remain an impediment for many potential buyers, you have to combine that with a recent drop in mortgage rates and overall economic optimism to understand what’s going on.

“When (consumers were) asked to explain their buying plans, references to high prices have receded and have been offset by greater confidence in their future job and income prospects,” said Richard Curtin, chief economist for Surveys of Consumers, University of Michigan, in a press release last week. He wasn’t referring to housing, but it’s a good sign for homebuilders if consumers feel that way in general.

Existing home sales, on a seasonally adjusted basis, are seen slipping slightly to 6.15 million in March, according to research firm Briefing.com. Last time out, existing home prices jumped more than 15% year-over-year to above $300,000, so keep an eye on that metric. Some of the major homebuilder stocks like Toll Brothers (NYSE:) and Lennar (NYSE:) have leveled off recently, so watch their reaction to these data.

The late baseball pitcher Dan Quisenberry said, “The future is like the present, only longer.” While we’re all focused on Q1 earnings results, it’s never too early to look ahead. Far ahead. The market always does, so investors need to think the same.

For instance, last summer a lot of analysts said COVID basically made 2020 earnings irrelevant and started to focus on 2021. Here, more than a quarter of the way through 2021, a new narrative is developing, with some analysts saying while things look great now for earnings and the economy, it might be a tough landing in 2022 with harder earnings and data comparisons and possibly higher taxes.

Looking closer out, they expect truly monumental earnings growth of 51.8% in Q2 this year, but keep in mind that’s going to be against some very easy comparisons to a year ago. The Q2 of 2020 was one of the worst earnings quarters ever.

Will Earnings Season Push the Index to Record Highs?