The period over the Easter weekend, with its subdued dynamics, allowed for an evaluation of domestic trends in the foreign exchange market without any news background noise.

Once again, we saw the carry-trade trend as currencies with higher interest rates got support.

The has been losing regularly against the pound since the beginning of the year, bringing losses down to 6.5%, closing with only two weeks of gains in all that time. On Monday, was down to 0.8470 in quiet trading, rewriting 13-month lows. The pound was also up to 153 yen. Since the Brexit referendum, it had only been above that level for a few weeks in 2018.

The has been severely oversold, losing sharply since the start of the year. We saw a short-term impulsive pullback yesterday, although it does not yet look like a threat to the prevailing trend. 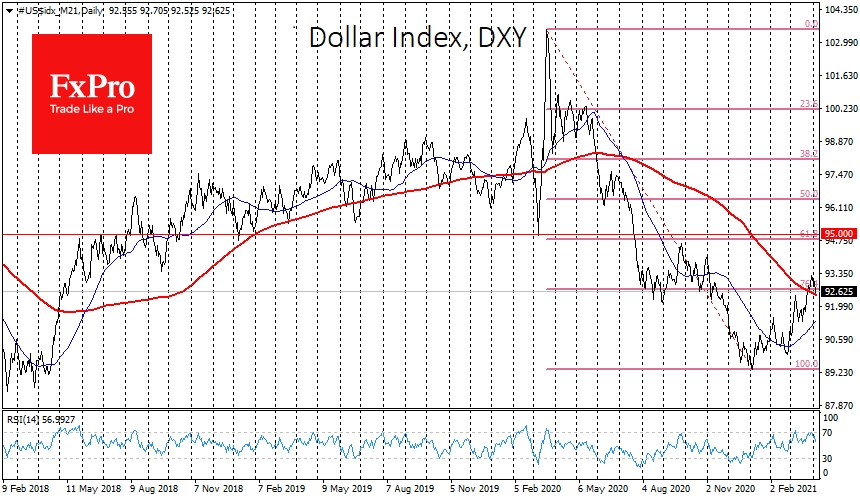 The has also been retreating against the single currency since the beginning of the month. The demand for risk is often correlated with a weaker USD. Therefore, such a condition seems to be more sustainable than a simultaneous rise in equities and USD.

However, USD has yet to confirm its decline. Right now, the DXY Dollar Index to a basket of major currencies is at 92.65, slightly above its 200-day average of 92.45. A break-down under this line in the next few days would signal that we have seen a false break earlier. Such false breaks are relatively common in recent years. It is better to pay more attention to the dynamics around this line than the line’s formal crossing.

In this case, we have seen that the momentum of the dollar’s rise has been exhausted. In May 2020, when the DXY fell under the 200-day average, the dollar’s sell-off only gained momentum. 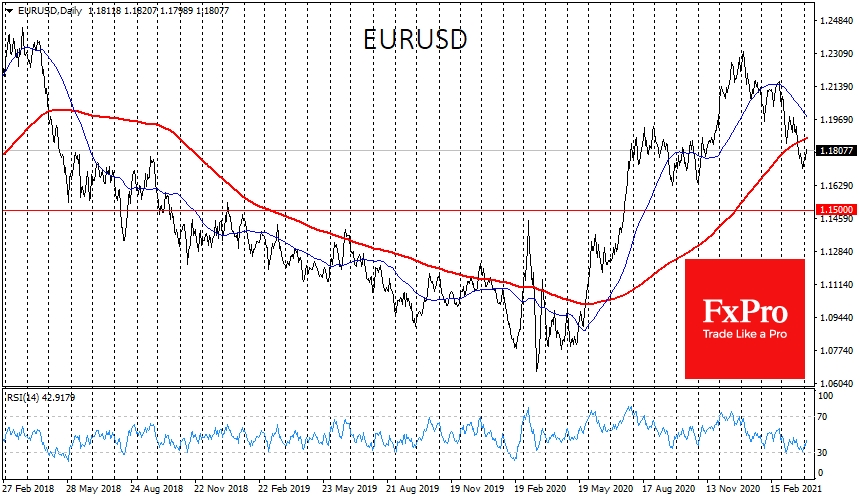 EURUSD should fight for its uptrend with 200 SMA

However, long-term traders would be better off waiting for a confirmation signal from EUR/USD, by far the most popular and important pair in FX. Since the end of March, it has been under the 200 SMA, which is now passing through 1.1880. A break above from the current levels near 1.1800 could be the necessary confirmation of an upward trend.

These long-term trends often have a meaningful impact on other markets. Thus the EUR/USD rally associated with a recovery in demand for risky assets, as is currently the case, usually supports strengthening in commodity markets. Gold, for example, received support at the end of March, developing a rebound to $1735 against lows of $1680.

EUR/USD growth is now hampered by the ultra-soft monetary policy of the ECB, which has stepped up QE. On the other hand, it has only strengthened buying rather than expanding the programme, which has been a catalyst but not affected the balance sheet. 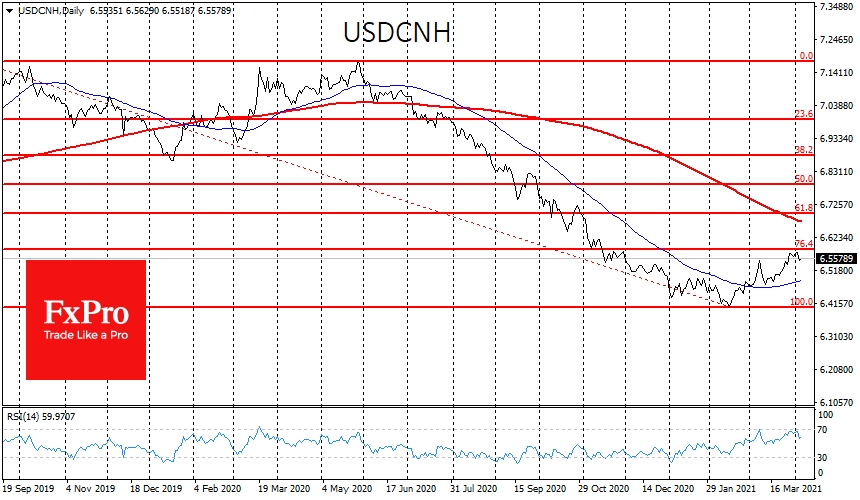 Pullback of USDCNH lost its strength near 23.6% Fibo retracement level

also looks indicative after the pair pulled back 23.6% from a significant decline from 7.20 to 6.40. After some correction of its oversold condition, the pair now has no technical barriers before a new wave of decline.

To an even greater extent, the dollar’s reversal to the downside could affect high-yielding emerging market currencies such as the Turkish lira, the Russian ruble and the South African rand.

US Dollar May Score Key Break vs. Aussie as Market Mood Sours

Will The Dollar Take Its Chance To Rebound?

In global markets, moderate moves remain in anticipation of US data and the ECB’s monetary policy .   These two events promise to set the tone for currency market trading at the start of the […]

Chinese RMB hits 3-year high vs. the USD The Chinese rose nearly 4% against the US dollar in the last two months—closing last week at a 3-year high. Some analysts believe the rally in the […]