Today, Federal Reserve releases the of its two-day monetary policy meeting, with delivering a press conference 30 minutes afterwards. No changes in the rate or stimulus programs are expected. However, it will be a crucial meeting for the markets.

Investors and traders will be closely watching how the Fed’s assessment of the prospects for economic recovery will change. In June, when the committee published its quarterly forecasts, there were hopes for a gradual recovery. However, after that, the number of new infections spiked to more than twice the number of lockdown highs in April. As a result, the lifting of the restrictions has stalled and, in some cases, has been tightened again. All this promises to add uncertainty to the forecasts or their reduction. 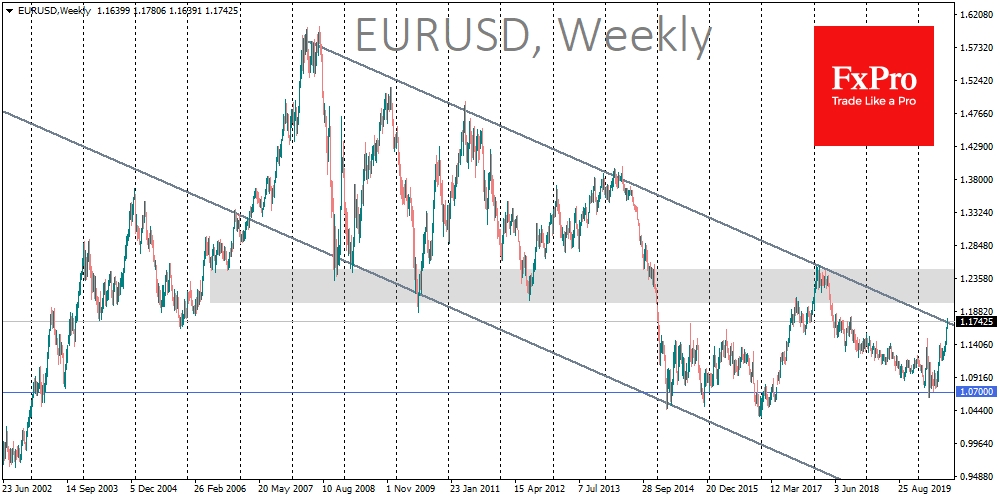 The debt markets pay just as much attention to this event. In recent days there has been more talk of the losing its “exorbitant privilege”. Since the 1960s, this term has been used to describe the advantages for the US dollar’s status as the world’s reserve currency. This status has helped to confer lower rates to US bonds than those of competing economies for years and to meet high demand and first-class liquidity consistently. Right now, yields on US government securities are higher than in many European countries, as well as Japan. This is alarming because the US needs to borrow trillions of dollars from the capital markets. It is in the Fed’s power to support bond prices, thereby reducing yields and debt service costs.

Perhaps the most interest still concerns the dynamics of the dollar. Since the beginning of July, it has been showing an almost daily decline against its main competitors. On the long-term charts, has been approaching the resistance level of the downtrend since 2011. A steady increase above the current levels (1.1750-1.1800) may become a signal of the start of a longer-term extension, as it was in the period from 2000 to 2008. 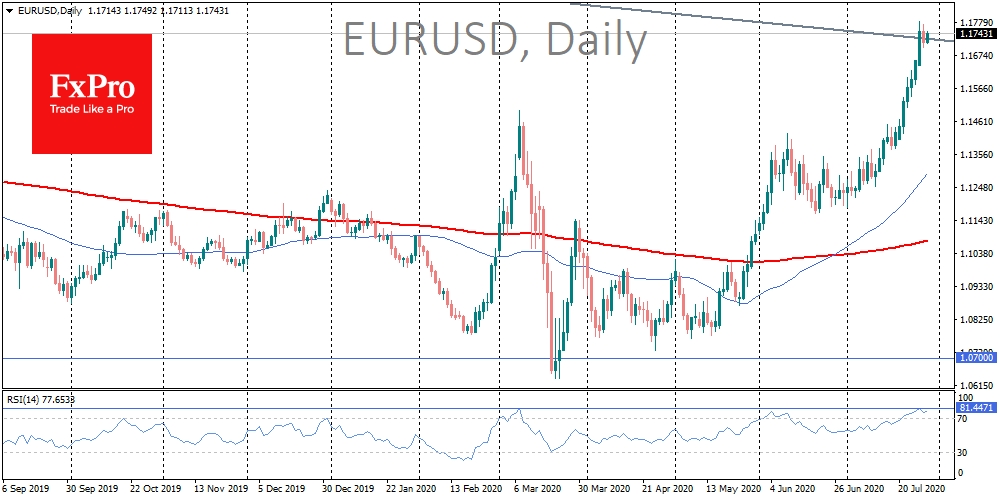 EURUSD: breaking thought the corridor or back in it’s middle?

Without the Fed’s attention to the topic of the dollar weakening, momentum in EUR/USD may take it to 1.2000 in August and to 1.2500 by the end of the year. It is hard to take the discussion seriously that this is beneficial for American companies. After all, the US is a net importer with a large trade deficit. A steady decline in the dollar could quickly turn into pressure on the US debt markets, which would put the government in a challenging position.

If the Fed speaks about this, then Chairman Powell will try to convince the world of stability at the press conference. Combined with the intense selling of the US currency in the last few weeks, this could lead to a confident retracement of the dollar to 1.1000. This scenario is seen as being the most likely, as it will allow the US Treasury to buy time for new rounds of borrowing.

It is unlikely that the EUR/USD to return to, or below, 1.07 unless there is a repeat of March’s markets disaster when demand for dollars swept away everything in its path.

Canadian Dollar Price Forecast, CAD, USD/CAD Talking Points: After a stern sell-off in July and August, USD/CAD has started to show hues of reversal so far in September. The pair is setup for short-term bullish […]

EUR/USD: Higher Chance Of Big Trend Up Or Down Today

The broke above the double top of a 3 week trading range yesterday. The bar was a bigger bar so it might soon attract profit takers. However, after 6 consecutive bull bars, the bulls will […]

Fed Minutes: Upbeat Economic Forecast Based On Stimulus Likely To Not Happen

When they made their upbeat economic forecasts last month, Federal Reserve policymakers said they presumed there would be additional fiscal stimulus from Congress—a condition that appears less likely to be met after President Donald Trump […]

Uniswap risks losing a significant amount of the weekly accrued gains if support at $8 is shattered. UNI/USD pessimistic outlook will be validated if the sell signal on the 12-hour chart confirms. Uniswap is ending […]

Weekly Fundamental Gold Price Forecast: Neutral Between investors seeking higher yielding and more growth-sensitive assets and a sense of disappointment over the Biden stimulus package, gold prices are struggling. As discussed in the early-December weekly […]

Gold is likely to open the week with intense selling pressure under the 200-day SMA. XAU/USD continues to struggle as the US dollar strengthens, downside eyes $1,800. Gold has retraced significantly after topping out at […]

The world’s leading cryptocurrency exchange token by means of market capitalization, Binance Coin, is approaching its ATH. This happens hours before the company goes on with its 14th scheduled BNB token burn. BNB Price Eyes […]

EUR/USD on the brink of an upside correction on the lower time frames before resuming medium-term downtrend. Monthly demand below the market would be targetted before the resumption of the longer-term uptrend.  EUR/USD has been […]

DOT price is having an impressive bullish expansion as in last few days it breached key POC S/R. DOTUSDT price action has managed to post multiple percentage gains with no clear signs of topping out […]