You might find yourself trying to put a square peg in a round hole and trying to decide if the market is “risk-on or risk-off.

“When shoots to the moon while is reaching for the stars, there’s a regime change afoot, and with few quality assets left to hedge into, gold needs to be at the top of the list.” (Feb 17)

If the US economy, which has been doing the heavy lifting for global growth the past few years, starts to sniffle, gold will go ballistic” (Feb 18)

Gold remains by far the preferred market virus facemask as yen loses its reliability as a risk-off trade when the exogenic shock comes from China. 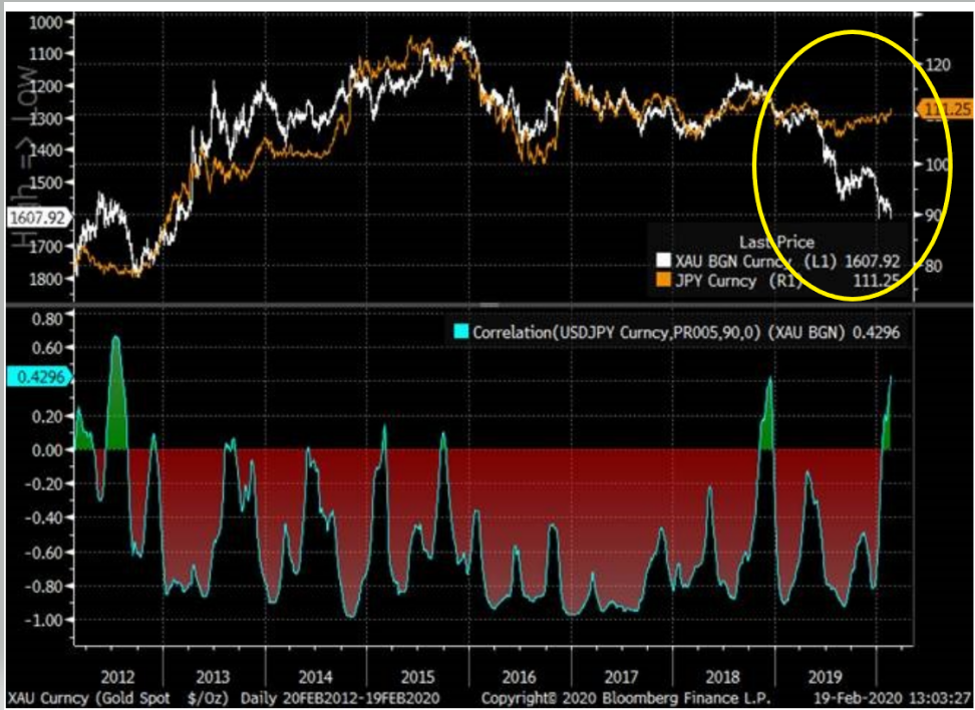 Gold put in a wicked rally as risk sentiment turned frighteningly nervous amid reports of more COVID-19 virus cases outside China, notably in Korea and Japan. Gold received additional support from the weakness in the USD with both the JPY and EUR regaining some recently lost ground, which occurred despite Japan’s flash slipping to 47.6 from 48.8 in January.

Equity market weakness in Asia, which migrated into Europe, was a plus for gold. And US action triggered further gains as weak US economic data buoyed gold. The USD dropped sharply after the IHS Markit flash services sector Purchasing Managers Index fell to 49.4 this month, down from 53.4 in January and the lowest level since October 2013. A reading below 50 shows economic contraction. The heavily weighted Index fell to 99.22 from 99.85 previously.

Yields dropped also. The yield on the US Treasury fell to a record low of 1.88% from 1.97% prior as equities slipped precipitously on programmed selling. 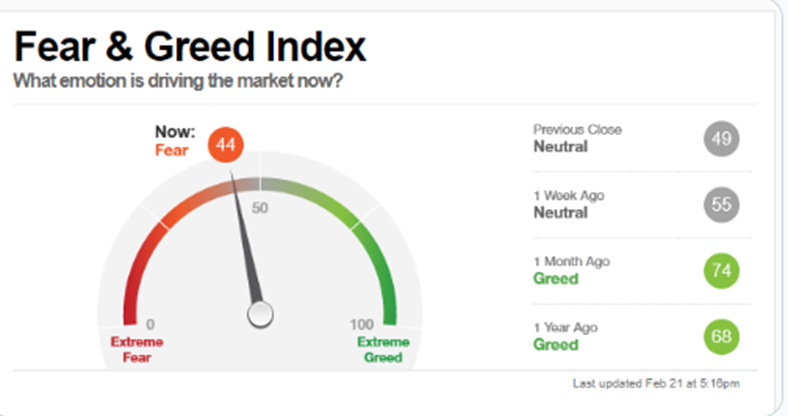 Gold notched its best weekly gain in nearly two months. And with Global stock markets in retreat and bond yields tanking which saw gold reaching for the stars. With the USD taking a knock, gold could go higher, and investors may seek additional hedges if global equity markets continue to retreat.

News direct from US corporates about supply-chain disruptions impacting revenue has weighed. After Apple downgrade on Wednesday, Procter and Gamble warned Thursday about lower Q1 sales and earnings, citing supply chains, and reduced store traffic in China. These profit warnings were a boon for gold as when the earnings cycle starts to saturate or fall, money tends to find safe assets such as gold. 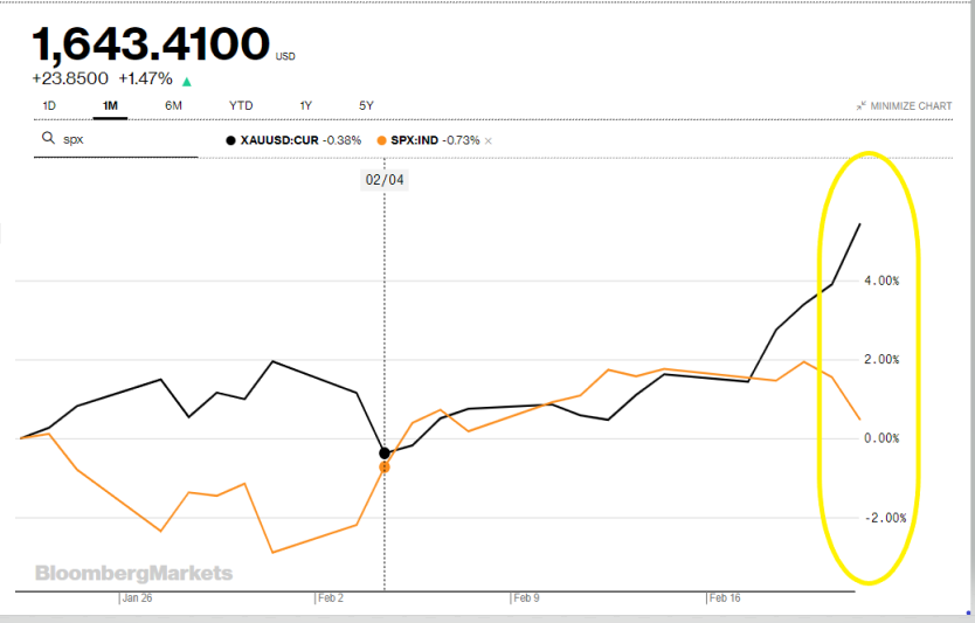 Yields have fallen sharply, but even the deep and liquid US Treasury markets will not absorb all risk-off related buying coming into the market, mainly as capital flows out of equities. Gold will be a prime beneficiary given its broader acceptance now as a quality asset after last year’s Central Bank buying splurge.

Focus is on Korea

The Proxies are a critical gauge for market sentiment, so next week the focus remains on Korea.

On Tuesday, President Moon Jae-in called for “all possible measures” to handle the emergency economic situation caused by the Covid-19 outbreak. But the surge in the number of confirmed cases, together with a report of South Korea’s first death from the virus, is likely to weigh further on already depressed sentiment and domestic demand –hence the market is expecting both a fiscal and monetary response as such a 25bp rate cut by the Bank of Korea (BoK) on Feb 27 is the base case.

Renewed anxieties about the spread of the Covid19 both inside and outside of China, has helped to drive the US yield curve lower. 10-year UST’s are trading sub 1.5 %, which has lit a fire under the gold markets on Friday. Fear of a “super spreading” virus was brought to the fore when Yonhap reported that South Korea said 52 additional cases overnight, bringing the total in the country to 156, a five times increase from earlier this week.

And with a four-standard deviation (SD) 2-day move in (mind you a result of the low vol as each SD is smaller right now than it was in the past)., profit-taking was setting in on the USD longs. Still, with the greenback wickedly overbought, there’s a growing reluctance to add more dollar carry haven hedges much too golds bullish delights and outside of investors insatiable demand for US Treasuries gold has managed to outshine all others.

AS for FX positioning risk, the KRW is densely positioned in bond and equity markets by historical standards (foreign ownership shares converted to percentile ranks). Taking the sensitivity of currencies to capital flows into account, and KRW is near if not at the top of the list. Hence the reason why the Won is leading the pack lower.

Also, JPY weakness is playing a role. Both Korea and Japan rely heavily on imported components from China to manufacture their electronic products: 44% of Korea’s total electrical and electronic imports come from China, and that ratio is 47% for Japan. These ratios are much higher than for other Asian countries: around 32% for Thailand, Taiwan, and Vietnam, and about 20% for Malaysia, Singapore, and the Philippines.

Regarding Japan’s poor PMI print, due to the COVID-19 outbreak, the lower reading shouldn’t come as a surprise but may add to the JPY’s short-term woes. This week’s JPY weakness appears to be a result of the weak 4Q GDP reading, then further driven by asset reallocations. But worries the Tokyo Olympics could be in jeopardy if the virus worsens is adding Japan’s growing wall of worry. Still, JPY weakness might be a little over-extended, especially in an environment of risk-off behavior, and so some position-squaring of JPY shorts into the weekend is not surprising although the current direction of travel makes sense.

With the markets less confident of a ‘peak virus’ moment, while questioning the numbers/methodology used by authorities in Hubei, not to mention the continually shifting goal post, things are looking mighty disheveled.

And given the rapid increase in the cases reported in Korea, and the continued drift higher in mortality rates in China, the market has switched back into fear mode.

On the high-frequency data, which included the 26 days since LNY, the back to work data suggests only about one-third of the Chinese workforce has returned to their jobs Coal consumption is more than 50% below its normal levels. Car sales are reported to have fallen by 92% in the first half of February. Exports from Korea have dropped 9% in the first 20 days of the month (to China by as much as 22%).

And news direct from US corporates about supply-chain disruptions impacting revenue has definitely weighed on sentiment. After Apple downgrade on Wednesday, Procter and Gamble warned Thursday about lower Q1 sales and earnings, citing supply chains, and reduced store traffic in China markets have started to wobble significantly.

It took Apple to do what the coronavirus couldn’t – make stocks feel a little queasy. While the market seemed to absorb the initial Apple shock in its typically pleasant manner, but it’s the aftershocks when corporate America starts waving the warning flags in tandem that could prove to be the biggest gut check.

While Singapore attempted to get ahead of the curve with a massive fiscal response and has eased the SGD declines across the bands, China’s low-spirited policy measure has allowed 7 to break on USDRMB without any apparent signs of resistance (on the fix or spot) and has left the market participants to speculate that perhaps the mother of all stimulus packages from the PBoC is not on the cards.

SEC’s action against binary options marketer may be dismissed

The Massachusetts District Court warns it may dismiss the action targeting binary options marketer who caused 25,000 investors to make deposits with unregistered firms. Nearly four months have passed since the United States Securities and […]

Ethereum (ETH) has seen some mixed price action over the past week, with the cryptocurrency previously finding some stability around $280 before plummeting below $250 in tandem with Bitcoin’s crash below $10,000. In the time […]

demand seems to be reemerging, with major currencies retreating marginally on Friday. However, the trading activity has been muted amid the lingering trade uncertainty and ahead of key economic updates out of the Eurozone and […]

Is There A Better Currency To Trade Versus GBP Than USD?

In our most recent “Week Ahead” we highlighted daily chart as our Chart of the Week. We discussed how the 61.8% retracement level from the March 9 highs to the March 20 lows at 1.2510 […]

CIRCULARS TO ISSUERS: C374 Issuers, ESMA Public Statement ‘Actions to mitigate the impact of COVID-19 on the EU financial markets regarding publication deadlines under the Transparency Directive’ (in Greek)

Charles Hoskinson, the CEO of IOHK, said that the huge amount of time, effort, and money spent has resulted in a unique product on the market that’s set to fulfill even the highest expectations. It […]

Getty Images The ever-rising national debt is set to soar again during the coronavirus crisis, perhaps to levels last seen during World War Two. The trillions of dollars Washington is spending to combat the […]

Dow, S&P 500, Nasdaq 100 Price Analysis It was a brutal month of March and the outlook for economic data is not bright as recessionary concerns have continued to grow as the novel coronavirus has […]