Last week the charts were that the was reaching a critical price level. And right now it is retesting that level — the December lows.

The dollar is subject to multiple pressures, not least as the leading global reserve currency. Complicating everything is the underlying FX conflict being waged by other nations attempting to constrain the world’s economic and military superpower.

U.S. President Donald Trump’s aggressiveness, using not just the American market but the currency that settles most global transactions, only exacerbated the sentiments of countries like China and Russia and the EU; they have for some time been talking about and are beginning to de-dollarize their reserves in favor of other currencies, primarily the .

Right now, the dollar is suffering from risk-on sentiment that has foreign investors selling Treasurys, largely in response to apparent progress on the trade front, along with accommodative monetary policy. Will the dollar keep falling?

We think it will. Below are some parameters to look for and how it might play out. 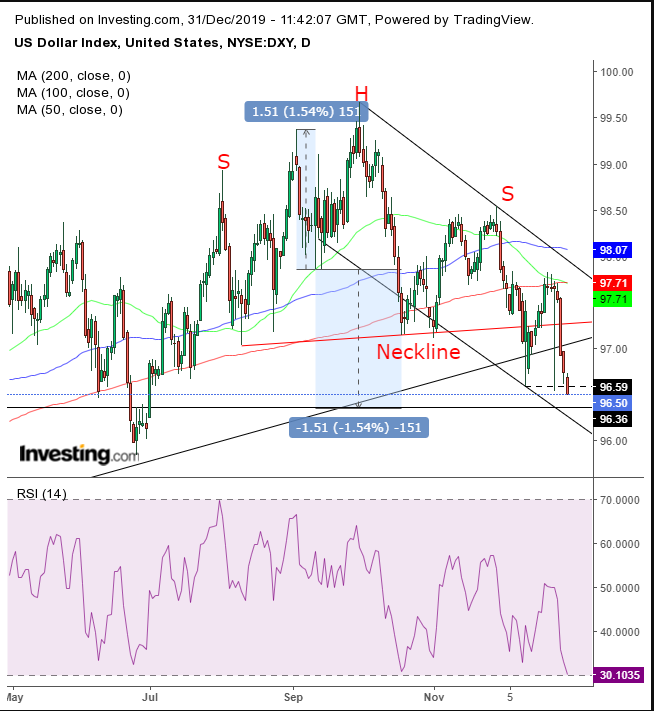 The dollar is reaching its double-top minimum target of 96.36, arrived at by measuring the lower of the two tops and the low preceding it. While that could bring on a pullback, it would concur with a return-move of a messy H&S top.

The messier the pattern, the less likely traders are to recognize it or to believe in it enough to join in.

However, its bearish implications are bolstered by the price falling below its uptrend line since Sept. 24 — the most oversold RSI since January 2018 — which preceded the double-digit bounce from the 88 lows to the brink of 100 in October.

Also, as if to tease, the 50 DMA just rested on top of the 200 DMA, keeping traders on their toes. Will the 50 DMA dip below the 200 DMA and trigger a death cross? Or bounce off it, which would instead be considered bullish?

Meanwhile, the dollar is falling for the fourth day, and trading at the bottom of the session. Should bears remain in control and succeed in closing the price at the lowest level since June, it would be one more nail in the coffin.

It would increase the probability of a death cross and affirm the H&S top, whose implied target would test the 95 psychological level.

Conservative traders would first wait for the price to close below 95.84, the June 29 low, and then wait for an upward correction with evidence of resistance before committing to a long position.

Moderate traders may wait for a correction, after closing below 96.59, the Dec. 12 low, not necessarily for confirmation of resistance but for a better entry.

Aggressive traders may enter a contrarian long position, counting on the chance for a rebound upon retesting the Dec. 1 low, providing they understand the risk after drawing up a trade plan with an attractive risk-reward ratio. At that point, they may join the moderate traders in a short.

USD/MXN Highlights: USD/MXN big-picture triangle broke to end 2019 A drop through 18.7433 need to give conviction To end 2019, USD/MXN broke out of the three-year-long triangle it had been building as a result of […]

Day Trading Indicator Set Up for Beginners 2020 (How to use VWAP, RSI, MACD Indicators)