US hiring likely surged in June, after unexpectedly starting to recover in May, and as businesses prepared to reopen. However, even if momentum kept pace, will investors focus on a second month of improvement, or on the fact that half of all Americans remain unemployed?

What might make it easier for traders to decide if the glass is half-empty, or half-full, are Dr. Anthony Fauci’s yesterday. The top United States authority on infectious diseases warned the country is “going in the wrong direction.” If the rate of infection continues at this pace, Fauci predicted there will be 100,000 new cases every day, more than double the current rate.

As we see it, the dollar may be stuck between a rock and a hard place. Fauci could become a modern-day Cassandra—the tragic Greek mythological heroine who had the power of foresight, but whose warnings went unheeded until it was too late—or the country might listen to his call, which may mean limiting reopening the American economy.

Bearing in mind that President Donald Trump has been pushing hard to end lockdowns immediately, in order to rebuild the shattered economy, just four months ahead of his reelection bid, it should come as no surprise that the doctor’s contact with the president has been “dramatically decreased,” giving the impression Fauci is being pushed out of the White House.

So, where does this leave the US currency? Considering the “damned-if-you-do-damned-if-you-don’t” situation in which the greenback appears to be, with the division of how to contain the contagion, we see risk for the dollar as laying overwhelmingly to the downside. 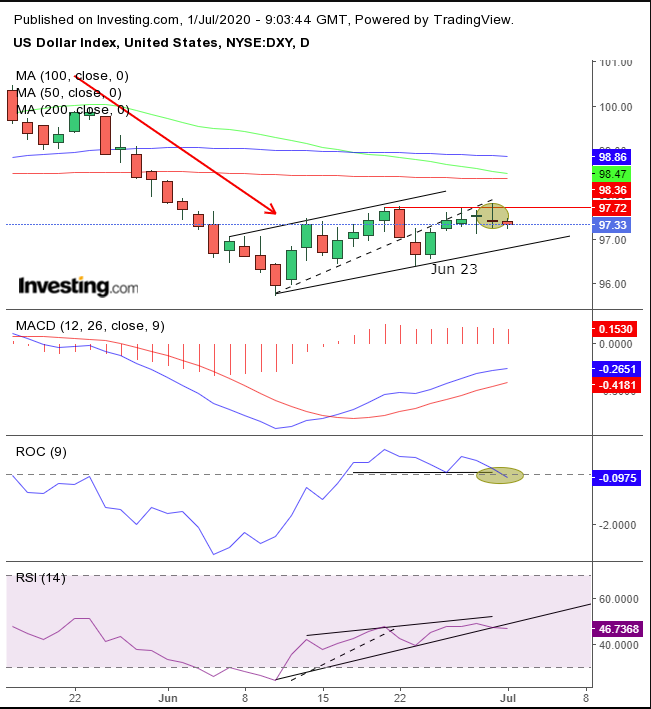 We had previously provided an interpretation of a which we are now questioning. Yesterday’s intraday high may have undone the original bottom, requiring a downside breakout of a new line that incorporates the June 23 low.

We don’t really think a mere 6-pip penetration—on an intraday basis, no less—would provoke a positional chain reaction, but we would be remiss if we didn’t include this technical point for conservative traders.

While the lagging MACD is still showing a buy signal, the more sensitive momentum-based RSI already provided a downside breakout of its own flag, including the June 23 low. The hyper-sensitive, momentum-based ROC already topped out.

The 50 DMA is gaining on the 200 DMA and about to break below it, triggering a much-feared death cross, perhaps one of the best-known technical formations.

This pause within a downtrend—presumably an opportunity for traders to take profit and for new bears to push another leg down—demonstrates that market players see the dollar falling further, given the political backdrop outlined above.

Conservative traders should wait for a downside breakout of the re-drawn flag that includes the June 23 low, and for a drop that would mark a new low in this downtrend, then retrace to retest the pattern.

Moderate traders would wait for the same downside breakout with a decline that would exceed at least the June 23 low, then wait for the likely corrective rally for a better point of entry, not to retest resistance.

Aggressive traders may rely on the original flag and short now.

Chart Of The Day: AUD/NZD

Should Cyprus FX brokers ride the funds wave? Here is the inside view

“Funds are something worth looking into for brokers, who have advanced technology and strong liquidity provider relationships. However, in our opinion asset management should be run fully separately from regular business of the broker, possibly […]