The AUD/USD pair witnessed an intraday turnaround from over one-week lows and rallied around 85 pips from the 0.7670-65 region on Tuesday. Despite doubts over the size and timing of the US fiscal stimulus package, hopes for a strong global economic recovery remained supportive of the underlying bullish tone in the financial markets. This, in turn, prompted some fresh selling around the safe-haven US dollar and was seen as a key factor that benefitted the perceived riskier Australian dollar.

The upbeat market mood got an additional boost after the International Monetary Fund (IMF) upgraded its forecast for 2021 global economic growth to 5.5% from 5.2%. The IMF, however, warned that the second wave of infections and new variants of COVID-19 pose risk for the outlook. Meanwhile, the upbeat release of the Conference Board’s US Consumer Confidence Index, which improved to 89.3 in January from 87.1 previous, did little to impress the USD bulls. The pair finally settled near the top end of its daily trading range and refreshed weekly tops during the Asian session on Wednesday.

The aussie benefitted from hotter-than-expected Australian consumer inflation figures, which showed that the headline CPI rose 0.9% during the October-December quarter. Annual CPI also beat forecasts and climbed 0.9% versus an estimated 0.7%. The inflation report will go into policy considerations at the upcoming Reserve Bank of Australia (RBA) meeting on February 2. That said, the RBA has already made it clear that it will not tighten borrowing costs until inflation is sustainably within the 2-3% target band. This, in turn, failed to assist the pair to capitalize on the early uptick.

Apart from this, escalating US-China tensions in the South China Sea further collaborated to cap gains for the China-proxy Australian dollar. Investors also seemed reluctant to place any aggressive bets, rather preferred to wait on the sidelines ahead of the latest FOMC monetary policy update on Wednesday. The Fed is scheduled to announce its decision later during the US session and is widely expected to leave its policy settings unchanged. Hence, the key focus will be on the accompanying policy statement and the Fed Chair Jerome Powell’s comments at the post-meeting conference.

Investors will look for clues about the central bank’s plan to start tapering the asset purchases later this year, which will play a key role in influencing the near-term USD price dynamics and provide a fresh directional impetus to the major.

From a technical perspective, the pair has been oscillating between two converging trend-line since the beginning of this year, forming a symmetrical triangle on short-term charts. Given the recent strong positive move, the triangle constitutes the formation of a bullish continuation (pennant) chart pattern and supports prospects for additional gains. That said, the direction of the next major move can only be determined after the occurrence of a valid breakout.

This makes it prudent to wait for a sustained move beyond the triangle resistance, currently near the 0.7770-80 region, before placing fresh bullish bets. Above the mentioned barrier, the pair seems all set to surpass the 0.7800 mark and test monthly swing highs, around the 0.7820 region touched on January 6.

On the flip side, the 0.7700 mark now seems to act as immediate strong support. This is followed by the lower boundary of the triangle, around the 0.7675 region. Failure to defend the mentioned support levels will negate the constructive set-up and turn the pair vulnerable. A subsequent fall below the 0.7635-30 area will reaffirm the bearish bias and drag the pair further below the 0.7600 mark, towards testing 0.7575-65 support zone. 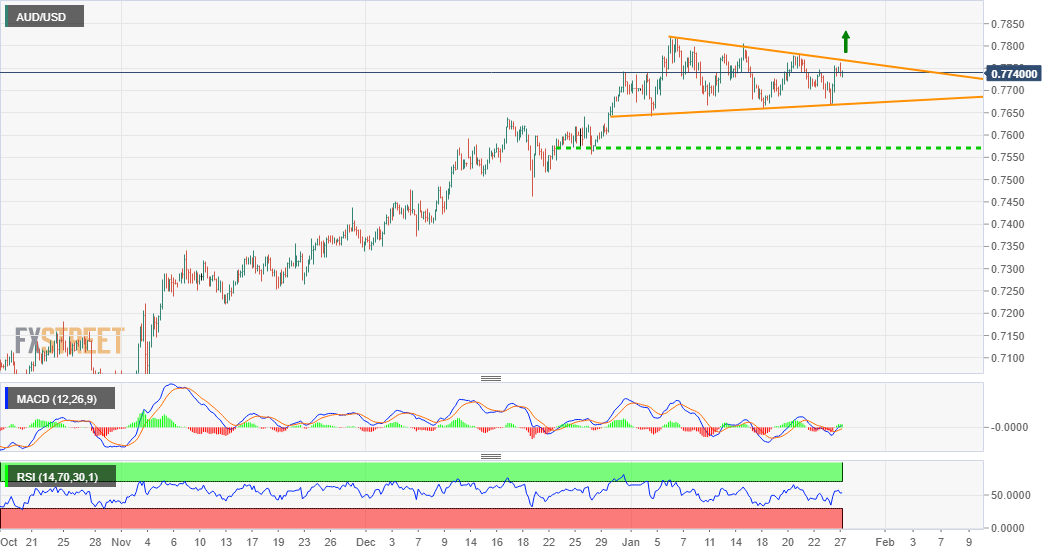 A relatively strong reaction in FI to the CPI miss while gold and stocks like the look of lower rates,  time to hit the profit take button? US was a bit of a miss, at […]

Finance Magnates had the chance to set up an interview with Alexander Tsikhilov, chairman of the board and co-founder of Admiral Markets. The multi-regulated brokerage is rolling out a new brand name on Friday. And […]

A Bloomberg Intelligence report has analyzed the bitcoin market and its growing stature as the digital store of value. The report looked into various aspects of the top cryptocurrency, including its declining volatility, rising adoption, […]