The GBP/USD pair gained some strong positive traction on Wednesday, albeit struggled to capitalize on the move and finally settled around 75-80 pips off weekly tops. The optimism over additional US fiscal stimulus measures and the COVID-19 vaccine kept the US dollar bulls on the defensive, which, in turn, extended some initial support to the pair. The British pound got an additional boost after the UK Cabinet minister, Michael Gove said that there can be scope for compromise on fishing right. Adding to this, German Chancellor Angela Merkel hinted that the EU will be willing to compromise on the level-playing field.

The positive headlines come on the back of news on Tuesday that the British government has dropped controversial clauses in its UK Internal Market Bill. This, in turn, raised prospects for a Brexit deal and forced investors to unwind their bearish GBP bets ahead of a key summit between UK Prime Minister Boris Johnson and European Commission President Ursula von der Leyen. However, comments from an EU diplomat, saying that that the expected outcome of the von der Leyen/Johnson meeting is to agree that more talks are needed and to signal that a deal is still possible, poured cold water on hopes for an immediate breakthrough.

Apart from this, stalled US stimulus talks raised doubts on whether the Republicans and Democrats can reach a consensus over the proposed a relief package. In fact, the US lawmakers approved a stopgap government funding bill on Wednesday but were unable to sort out disagreements over aid to state and local governments. This led to a turnaround in the US equity markets and triggered a sell-off in tech stocks, which drove some haven flows back towards the greenback and prompted fresh selling around the major during the second half of the trading action on Wednesday.

Meanwhile, the meeting between Johnson and von der Leyen ended with no concrete progress. A senior UK source told the media that very large gaps remain between the two sides and it is still unclear if these can be bridged. Nevertheless, the top officials agreed to delay a firm decision about the future of Brexit talks until Sunday and added to uncertainty. This was evident from the emergence of some fresh selling around the British pound on Thursday, which dragged the GBP/USD pair to the 1.3300 neighbourhood during the Asian session.

The downside remained limited, at least for the time being, as investors preferred to wait for fresh Brexit developments before positioning for the near-term trajectory. In the meantime, Thursday’s UK macro releases will be looked upon for some trading impetus. The US economic docket highlights the release of the latest consumer inflation figures and Initial Weekly Jobless Claims. Apart from this, the US stimulus headlines will influence the USD price dynamics and further assist traders to grab some meaningful opportunities.

From a technical perspective, nothing seems to have changed much for the pair and the two-way price moves warrant some caution before positioning for a firm near-term direction. The 1.3300-1.3290 region might continue to act as immediate support, which if broken might turn the pair vulnerable to accelerate the fall back towards weekly swing lows, around the 1.3225 area. Some follow-through selling below the 1.3200 mark will be seen as a fresh trigger for bearish traders and pave the way for an extension of the corrective slide.

On the flip side, any attempted positive move might continue to confront stiff resistance near the top boundary of a two-month-old ascending trend-channel. The mentioned barrier is currently pegged near the key 1.3500 psychological mark, which if cleared decisively will negate any near-term negative bias. Bulls might then aim to reclaim the 1.3600 mark for the first time since May 2018. 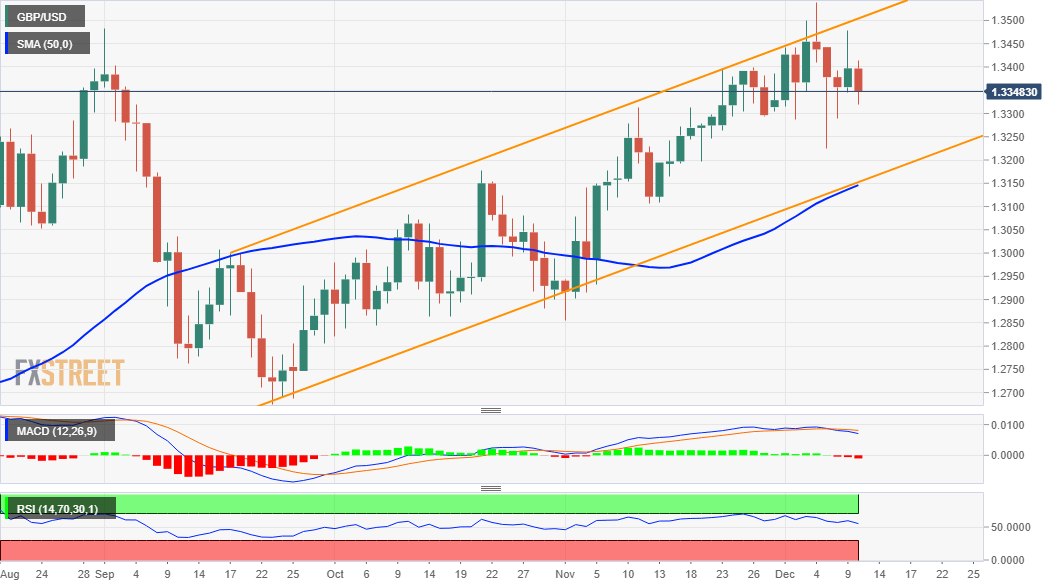 The British pound continues to make inroads against the US dollar, as is poised to complete a fifth straight winning week. Currently, the pair is trading at 1.3484, down 0.03% on the day. A tale […]

Bitcoin price has significantly recovered from a dip to $30,420 touching $40,000 again. The digital asset is under extreme pressure as volatility continues to rise. Bitcoin whales have accumulated a lot of Bitcoin over the […]

GBP/USD Current price: 1.3419 A trade deal between the EU and the UK could be announced this week. The UK Markit Manufacturing PMI came in better than previously estimated at 55.6. GBP/USD bullish potential increased […]

Gold is likely to open the week with intense selling pressure under the 200-day SMA. XAU/USD continues to struggle as the US dollar strengthens, downside eyes $1,800. Gold has retraced significantly after topping out at […]

Ether is stable above $1,200 as buyers get ready for the utmost upswing to $1,400. The IOMAP model reveals that Ethereum has little overhead pressure that could prevent a potential uptrend. Ethereum has not moved […]

Week Ahead: Slumping U.S. Markets Expected To Pause Ahead Of Biden Inauguration

DOT price is having an impressive bullish expansion as in last few days it breached key POC S/R. DOTUSDT price action has managed to post multiple percentage gains with no clear signs of topping out […]

Recommended by Daniel Dubrovsky Get Your Free Equities Forecast Equities mostly fell this past week with a few key exceptions. On Wall Street, the S&P 500 sank over 1% while small-cap stocks outperformed the broader […]

Another volatile weekend: the Bitcoin price is down by 7% over the past 24 hours after losing critical support at $36,000. Only three days ago, the cryptocurrency pushed over $40K but failed to close above […]