Bitcoin (BTC/USD) has rebounded back above the key psychological level of $46,000 after bears failed to push prices below critical support.

With softer US CPI data now being priced into markets, expectations of near-term tapering has temporarily eased, boosting demand for the two largest cryptocurrencies (in terms of market cap), Bitcoin and Ethereum.

Although many alt-coins have remained relatively flat, Litecoin (LTC/USD) currently remains under pressure after it was confirmed that the announcement of a partnership agreement between Walmart and Litecoin was in fact fake news.

The steep rally came to a rapid halt forcing bulls to give back the 30% gains achieved as a result of the ‘deal’. 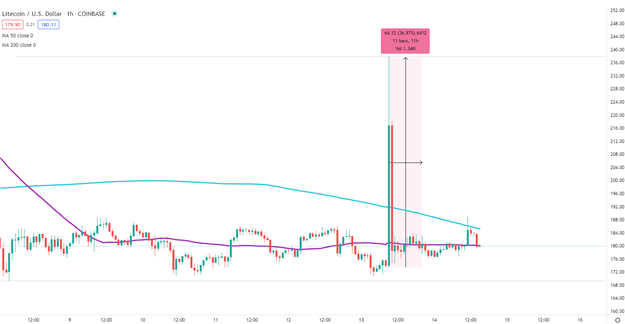 Bitcoin prices have recovered from last week’s correction, reclaiming the key psychological level of $46,000. After falling below $44,000, failure to break the 38.2% Fibonacci level of the June – September move at $43,500, provided bulls the opportunity to drive prices back towards the near-term resistance, currently holding at $47,081 (the 23.6% retracement of the above-mentioned move).

Meanwhile, the moving average convergence/divergence (MACD) remains above the zero-line, at least for now.

With price action currently encapsulated between prominent levels, the ability to break above the key psychological level of $47,000 may give rise to further bullish momentum and a possible retest of $50,000. 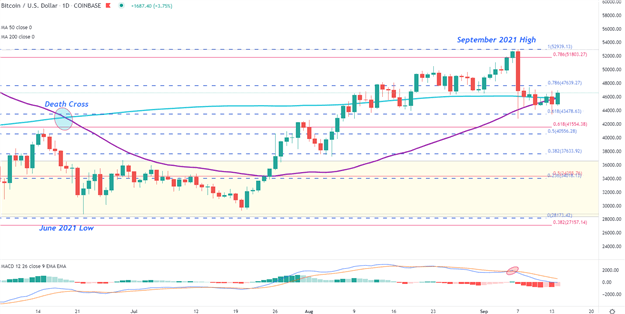 Bitcoin (BTC) Transactions Worth Over $1 Million Hit All-Time High As BTC Price Struggles to Hold at $50,000

The world’s largest cryptocurrency Bitcoin (BTC) has been struggling under the $50,000 levels. After Tesla dropping BTC payments earlier this week, BTC registered more than a 15% price crash and is currently trading 3.64% down […]

Bitcoin Rebounds Back Towards $60K, Dogecoin Continues its Upward Surge