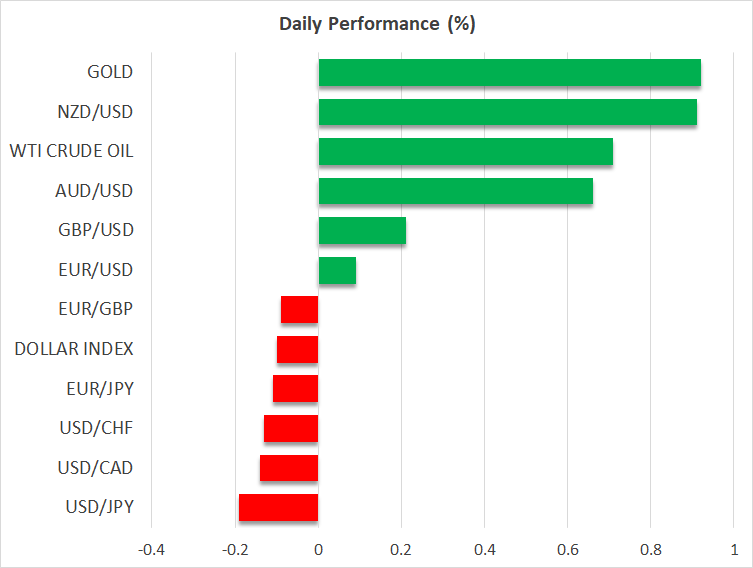 The Reserve Bank of Australia took the first step towards exiting cheap money policies at its meeting today. It signaled that asset purchases will slow down since the economy is much stronger than earlier expected, but tried to neutralize this optimistic message by repeating that interest rates are unlikely to rise before 2024.

Policymakers see a stronger recovery ahead, which allows them to take their foot off the monetary gas a little. Still, the latest shutdown in Australia apparently threw a monkey wrench into their normalization plans, leading them to take ‘half measures’ on rate guidance.

The market reaction was volatile at first given the mixed signals, but traders ultimately decided it is the direction of travel that matters most, with the aussie trading higher once the dust settled. After all, rate guidance can always change if the economy continues to perform well. A minor retreat in the US dollar added fuel to the move.

But the currency that capitalized most on the dollar’s latest pullback is the after a quarterly business survey painted an extremely bright picture of New Zealand’s economy. It pointed to booming demand, severe worker shortages by companies, and intensifying inflationary pressures.

Markets reacted swiftly, bringing forward the first rate increase by the RBNZ to November this year, with another one to follow by spring 2022. Hence, New Zealand is expected to be the first major nation to raise interest rates this cycle.

This raises the stakes ahead of next week’s RBNZ meeting. Is the central bank comfortable with market pricing for a rate hike in five months, or does it push back? The answer will determine the kiwi’s short-term fortunes. That said, the big picture seems promising.

New Zealand is the prime example of what happens when you treat a supply shock as a demand crisis and pour endless fiscal fuel on the fire. The supply side can’t cope and you get a booming economy, but at the cost of higher inflation. The RBNZ will likely be one of the most aggressive central banks this cycle, which spells upside risks for the kiwi against low-yielding currencies like the yen and franc.

The excitement doesn’t stop there as commodity markets are in a great mood too. Oil prices continue to power higher after the OPEC negotiations about raising production broke down yesterday, with the UAE blocking the deal as it seeks to negotiate more production for itself.

Without a new agreement, the current limits on OPEC supply remain in place, which means the market could remain undersupplied in the near term. Hence why oil prices keep rallying. That said, WTI is now testing the $77/barrel zone, which was a fortress in the past. It was both the 2018 high and the 2012 low, so it’s a massive technical barrier.

Gold prices just passed their own technical test with flying colors, punching above the crucial $1795 region with force. The yellow metal seems to be drawing power from the latest retreat in the dollar and real US yields, on top of some real demand from central banks, which according to recent reports have been adding to their gold reserves lately.

Still, it’s difficult to envision a healthy and lasting rally in an environment where several central banks are quietly heading for the exits, especially when the Fed is one of those. Cheap money and a struggling dollar are necessary for gold to flourish, and that era seems to be ending.

As for today, all eyes will be on the ISM services survey for June. 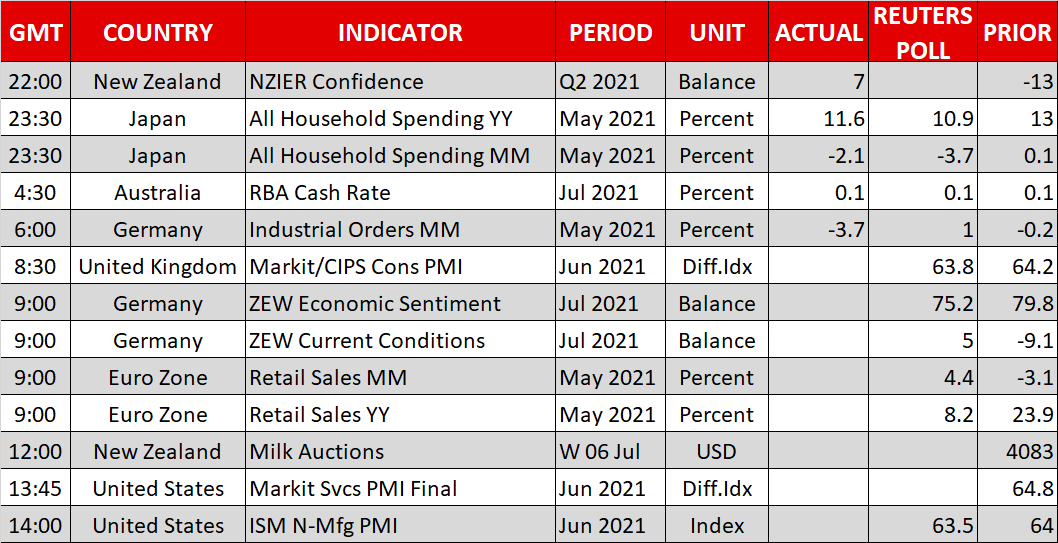 Price: Has the greenback really lost its preeminent place in the world? Not according to currency expert Marc Chandler, who explains why so many are—wrongly—pessimistic about both the dollar and the U.S. economy.   Making […]

US dollar dips as inflation concerns ease The US dollar headed south overnight, unable to hold onto recent gains as inflation fears temporarily subsided as the bond passed without incident, and a fall in US […]

At the end of its regular , the Fed improved economic growth estimates, raised inflation forecasts for this year and brought the expected interest rate hike date closer. These estimates caused the to jump by […]