The AUD/JPY has stalled on its recent rally as it failed to break through the 200-day simple moving average (SMA) at 82.03 last week. That level is now a potential resistance point as it failed again 2 days later to go higher. 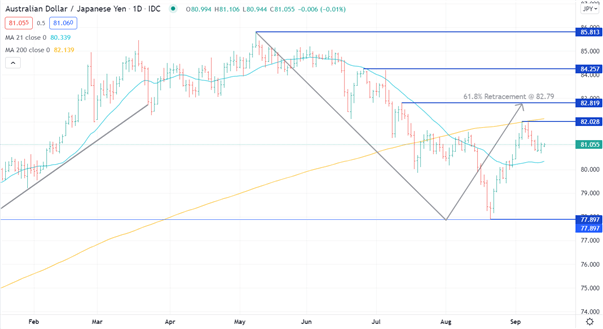 The AUD/NZD remains in a descending channel and there are several trendlines with a negative gradient. In late August, the cross made a new low for the year when it broke through the previous low of 1.0418.

Trendline support, currently at 1.0310, may lend some potential for a turn higher, and a break below that level could suggest an acceleration in the down move. 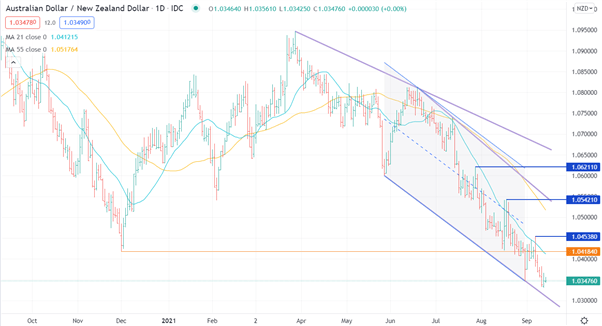 At the beginning of this month, the AUD/CAD managed to break up through a previous high of 0.9234 and trendline resistance before progressing to move above the 100-day SMA. As a result of this recent run higher, the 21-day SMA has turned to a positive gradient.

The next potential resistance levels are at the recent top of 0.9377 and the previous high at 0.9420. Beyond those points, there is a pivot point reversal at 0.9451 that may offer resistance.

On the downside, 0.9234 has now become a pivot point to watch while the new low of the year at 0.9114 may provide some support. 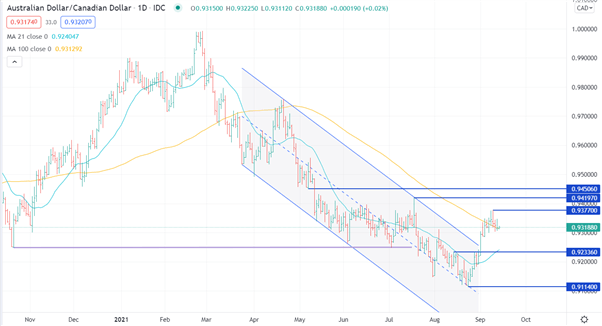 traded higher during the European morning Monday, breaking above the resistance (now turned into support) barrier of 0.9533. The move appears to have signaled the completion of a double bottom formation on the 4-hour chart, […]