The financial community traded in a risk-off fashion yesterday and during the Asian morning today, as investors continued locking profits ahead of the FOMC decision later today. Despite some speculation that the Committee may adopt a yield-curve-control policy, we don’t expect any action today. The better-than-expected employment report for May suggests that the worse with regards to the pandemic is behind us, which may prompt policymakers to sound somewhat more sanguine with regards to the US economic outlook.

The continued trading lower against most of the other G10 currencies on Tuesday and during the Asian morning Wednesday. It gained only versus and , while it was found virtually unchanged against . The greenback lost the most ground versus , and 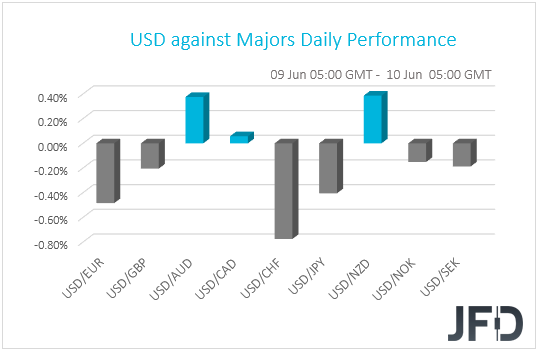 Despite the further slide in the US dollar, the weakening of the risk-linked and , and the strengthening of the safe-havens franc and yen, suggest that market participants traded on the cautious side again. Indeed, looking at the performance in the equity world, we see that most major EU and US indices traded in negative waters, with the broader appetite improving only slightly during the Asian session today. Japan’s , Hong Kong’s and South Korea’s are up 0.06%, 0.23% and 0.25% respectively, but China’s is down 0.43%. 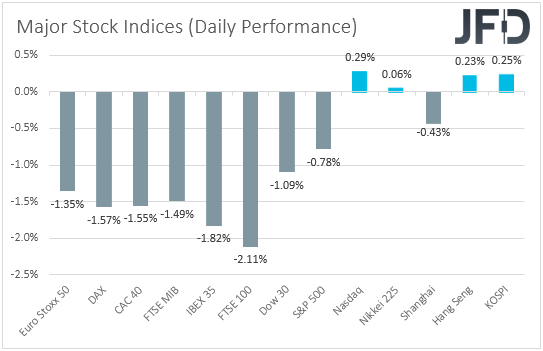 It seems that investors continued locking profits ahead of the FOMC decision later today. This would be the first gathering after April, when the Committee kept interest rates unchanged at the 0-0.25% range, and hinted that more stimulus may be delivered if judged necessary. “We will continue to use powers proactively until we’re confident that the US is solidly on the road to recovery”, Fed Chair Powell noted. He also added that economic activity will likely drop at an “unprecedented pace” in Q2, while in recent remarks, he reaffirmed the Bank’s “whatever it takes” approach, raising speculation that officials may proceed with adopting a yield-curve-control policy, similar to that of the BoJ’s. 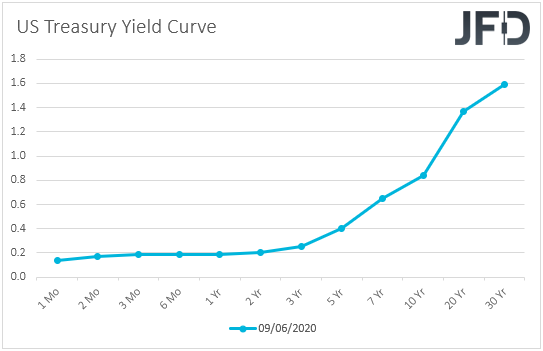 However, we don’t expect them to act at this gathering. Yes, the Atlanta Fed GDPNow and the New York Nowcast models add credence to Powell’s remarks, pointing to a -53.8% and a -25.5% growth rates respectively, but until we get official numbers, we don’t believe that the Fed will rush into expanding its stimulus efforts. After all, they already announced an expansion of their Municipal Liquidity Facility on Friday. Another factor which makes us believe that the Fed is unlikely to act this time is the much-better-than-expected employment report for May. On Friday, the report showed that the US economy added 2.51mn jobs instead of losing 8.0mn as the forecast suggested, with the unemployment rate falling to 13.3% from 14.9%, beating estimates of a surge to 19.7%. 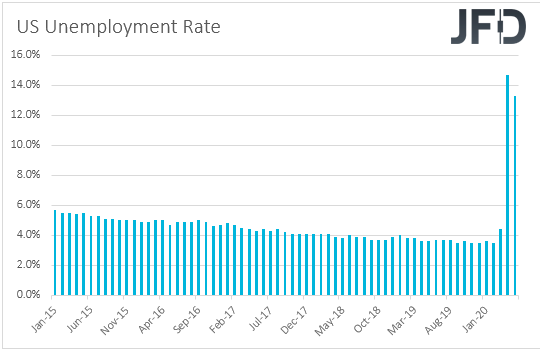 Given that this will be one of the “bigger meetings”, which are accompanied by economic projections, it would be interesting to see what the current view among officials in the wake of such a surprising jobs report is. In our view, the report suggests that the worst with regards to the coronavirus is behind us, but it remains to be seen whether officials will share that view as well. Although we don’t expect them to act, we believe that they will stay ready to do so if things fall out of orbit, which combined with a relatively not-that-worrisome language over the economic outlook, may allow equities and risk-linked assets to rebound again, as investors restart abandoning safe havens. Paradoxically, a somewhat more optimistic Fed may prove negative for the US dollar, as it has been wearing its safe-haven suit recently.

Although EUR/USD already had a decent run to the upside in a relatively short period of time, it is still showing willingness to push higher. The pair continues to balance above a short-term upside support line taken from the low of May 25th. At the same time, the rate has come back close to testing the high of last week, at 1.1384. We will take a positive approach for now, however to get slightly more comfortable with higher areas, a break of last week’s high would be needed.

If, eventually, we do see a strong move above the high of last week, at 1.1384, this would confirm a forthcoming higher high and clear the path for a further acceleration. The pair might then travel to the 1.1422 obstacle, a break of which may set the stage for a test 1.1495 level, marked by the highest point of this year, reached in the beginning of March.

Alternatively, if the aforementioned upside line breaks and the rate slides below yesterday’s low, at 1.1241, that could cause a change in the current short-term trend and open the way for lower areas. Such a move would also confirm a forthcoming lower low and may send the pair to the 1.1195 obstacle, or even the 1.1145 hurdle, marked by the highest point of May. EUR/USD might stall there temporarily, or even rebound slightly. That said, if it remains somewhere below the 1.1200 mark, the bears could step in again, take advantage of the higher rate, and push the pair down. Another slide might force EUR/USD to break the 1.1145 zone this time and aim for the 1.1100 level, which is the lowest point of June.

The S&P500 index closed in the negative territory yesterday, however, this morning, we can see that the cash index has already recovered all the losses. The index is still balancing above a short-term upside support line taken from the low of May 14th, which keeps the bulls happy, for now. Even though we are still somewhat positive with the near-term outlook, we would prefer to see a strong push above yesterday’s high, at 3233, in order to get a bit more comfortable with higher areas.

A move above the aforementioned 3233 barrier would confirm a forthcoming higher high and could signal a continuation of the prevailing trend. The S&P 500 might then test the 3259 obstacle, a break of which could set the stage for a move to the 3305 level, marked near the low of February 9th and near the high of February 24th.

On the downside, we may start examining lower areas, if the aforementioned upside line breaks. If so, the price could fall to the 3130 zone, marked by the high of June 4th and an intraday swing low of June 5th, where the index may stall for a bit. However, if the 3130 eventually fails to keep the price up, its break might open the door to some lower areas. The S&P500 could slide to the 3090 obstacle, a break of which may clear the path to the 3069 level, marked by the highest point of May.

AS FOR THE REST OF TODAY’S EVENTS

During the early EU morning, we already got Norway’s CPIs for May. The headline CPI rate rose to +1.3% yoy from +0.8%, while the core rate increased to +3.0% yoy from +2.8%. At its latest meeting, the Norges Bank cut its benchmark policy rate to 0.0%, with officials saying that it will most likely stay at that level for some time ahead. “We do not envisage making further policy rate cuts”, Governor Olsen said in the accompanying statement. Thus, accelerating inflation may add credence to their view and allow them to sit comfortably on the sidelines. 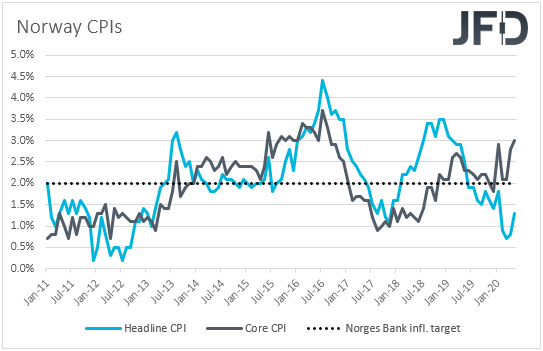 We get more CPI data for May later in the day, this time from the US. The headline rate is expected to have ticked down to +0.2% yoy from +0.3%, while the core rate is forecast to have slid to +1.3% yoy from +1.4%. Despite a potential slowdown in US inflation, we don’t expect market participants to pay so much attention. We expect them to keep their gaze locked on the FOMC decision, which is due to be released later in the day. 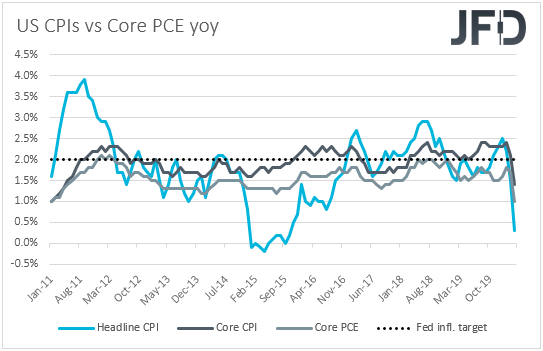 With regard to the energy market, we have the EIA (Energy Information Administration) weekly report on inventories. Expectations are for a 1.738mn decrease after a 2.077mn slide. However, bearing in mind that, overnight, the API report revealed an 8.400mn inventory build, we would consider the risks surrounding the EIA forecast as tilted to the upside.

Daily Market Review: All lights Turn to the FOMC Decision

Canadian Dollar Talking Points USD/CAD trades to a fresh monthly high (1.3390) as the US Dollar appreciates on the back of waning risk appetite, and key market trends may continue to influence the exchange rate […]

BOARD DECISIONS: CySEC Decision for the suspension of CIF license of Hoch Capital Ltd