(Monday Market Open) After logging its best week since the Ford administration, the market looks unsteady Monday as investors await what could be an ugly start to earnings season.

FactSet expects Q1 earnings per share to drop 10% from a year ago. That would be the worst performance in more than a decade. Earnings drive the market, and unfortunately, the engine just isn’t running full steam at the moment as the companies grapple with the pandemic.

The virus remains front and center this week, but earnings results could potentially help blunt the blow from this relentless focus on health- and shutdown-related news. That said, earnings themselves might be a new bearish factor if companies see worse things up the road.

Tomorrow and the days after that are all about the tone the bank executives set going forward. Investors might want to watch that closely, especially anything bank leaders say about how long they think it will take to get the economy going again once things re-open. The market’s recent rally baked in some positive expectations, and now you want to see if the Financial CEOs back those positive expectations.

Crude also takes the spotlight Monday, with no major earnings or data on the calendar until tomorrow. Prices initially bounced on word of a massive output cut agreement over the weekend by OPEC and Russia, but that rebound faded as the morning advanced. With the opening bell approaching, actually fell back into negative territory. That’s not a good indicator for the beaten-down Energy sector.

OPEC and Russia agreed to an approximately 10-million barrel a day production cut starting May 1. That’s the biggest output reduction ever planned, but where OPEC’s had issues isn’t with the announcements, it’s with the execution and getting everyone to play by the rules. That’s the question everyone has, and it might be one reason crude prices didn’t show much zip this morning.

JP Morgan Chase (NYSE:) and Wells Fargo (NYSE:) kick things off tomorrow, followed by Citigroup (NYSE:), Bank of America (NYSE:), Goldman Sachs (NYSE:), and Morgan Stanley (NYSE:) later in the week. That 5% rally in the sector on Thursday came after all these companies got beaten down for weeks by concerns about banks being right in the eye of the virus hurricane smacking the economy.

Financials got a boost last Thursday when Fed Chairman Jerome Powell went on TV and said banks don’t have to cut their dividends, and are well capitalized. Trillions of dollars are hitting the economy both in Fed lending and fiscal stimulus, but that one piece of news from Powell might have turned some investors more bullish on banks because there’d been some concern about chances for banks to return money to investors.

Remember that back in 2008, the word was if you were bailed out by the government, you shouldn’t be able to do dividends or buybacks. The Fed chairman basically wiped those worries off the table, which seems fair when you consider that unlike 2008, no one is blaming the banking sector for the trouble we’re all in.

This could have been a shot of confidence people needed—hearing the Fed say banks can continue to pay dividends even when the 10-year yield is 0.7% and they’re beneficiaries of all this financing going on. It might take some of the pressure away from this week’s earnings calls. Investors had been wondering if dividend cuts might be unveiled. It’s still possible, but seems less likely now.

Another shot in the arm for banks last Thursday was the Fed’s announcement that it will provide $2.3 trillion in economic support and expand its operations to reach small and midsize businesses.

It’s kind of like the Fed has gone from filling holes in the boat to building a new mast and adding a more powerful engine, when you think about all the steps it’s taken the last few weeks to shore things up. This could conceivably take pressure off of Congress to jump in with more stimulus right away. Maybe they’ll wait to see if the checks now going out to individuals have any kind of impact first.

Key Earnings Also on Tap For Healthcare This Week

The ABT call might be more interesting than usual for any updates on its coronavirus test, while JNJ might also have updates on the vaccine it has in development.

There’s data ahead too, this week. Watch for March retail sales on Wednesday, which will be the first retail sales report to really reflect a chunk of the virus’ impact on consumers.

Last week ended on a high note as stocks rallied in the final hour after a slight sputter. This might have some significance for the days ahead, because it pointed to possible investor resilience that was lacking over the last month.

Many participants entered Thursday worried that with a three-day weekend ahead, people might unwind risk late in the day. At first it looked like those fears would come true when both the (SPX) and the ($DJI) fell steeply as crude sold off about an hour ahead of the close.

But a funny thing happened on the way to what looked like another end-of-the-week disappointment. The downward effort lost steam and stocks came back to post moderate gains for the day, though major indices finished below their session highs. That was a very, very good signal, because the last few Fridays saw a free-fall into the close (Thursday was basically Friday last week with the holiday closure ahead). It was very encouraging to see the indices finish way off their session lows, and the SPX ended well above technical support that rests in the 2750 region.

Going into the new week, there could be resistance near 2810, a level the SPX had trouble busting through last Thursday. It marks a 50% recovery point between the March 23 closing low to the mid-February all-time high (see more below). The SPX gained just over 12% last week, while the Index (COMP) rose 10.6%.

That masks what remains a dismal economic situation, where 16 million Americans have lost their jobs the last three weeks. Markets tend to look forward, not back. That’s why stocks might not be reacting so much to these atrocious jobs numbers. However, consumer sentiment plummeted in a report released Thursday, which could have ramifications looking ahead. 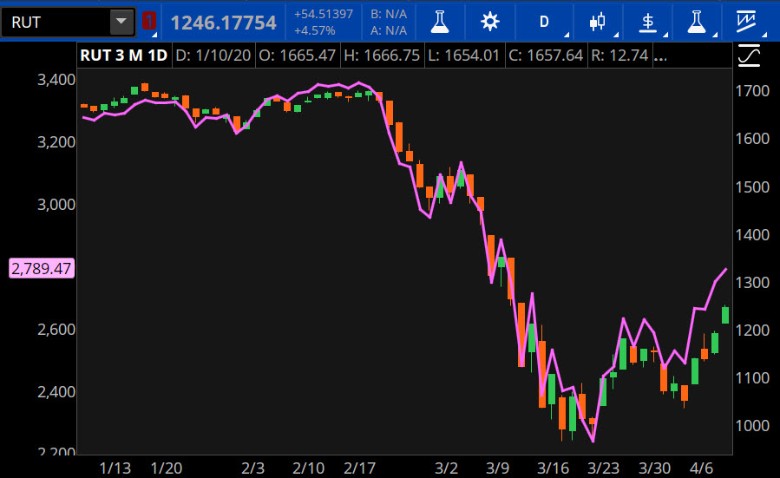 CHART OF THE DAY: JUMPING THE RUT? While pretty much nothing remained unscathed by the March selloff, the small-cap Index (RUT—candlestick) took deeper cuts than most. And until the middle of last week, RUT lagged the S&P 500 Index (SPX—purple line) on the rebound. But RUT lapped the field Wednesday and Thursday, rising 9% over two sessions. Data sources: Russell Indexes, S&P Dow Jones Indices. Chart Source: The thinkorswim® platform from TD Ameritrade. For illustrative purposes only. Past performance does not guarantee future results.

Small Fry Get Their Turn: Stocks surrendered some of their biggest gains last Thursday as the weekend approached, but there’s a silver lining in that small-caps galloped ahead of their larger cousins to outpace the broader market. It’s often said that the smaller stocks can be a barometer for economic growth, and they’re the ones that really fell off a cliff even more than other categories in the depths of the March downturn. Now they seem to be trying to make up for lost time. The Russell 2000 Index (RUT) rose more than 4.5% on Thursday, compared to a rise of just over 1% for the SPX.

One thing to consider before getting too excited about the little rally in the RUT is that small-caps weren’t keeping up with larger stocks even before the crisis. That’s in part because many of these smaller companies are more highly-leveraged. In the current environment, that’s arguably not a good thing, though the Fed is doing what it can to make sure small businesses have access to cash as business ebbs. As Bank of America (BAC) pointed out in a report last week cited by Reuters, 70% of small-cap debt is of the potentially riskier, high-yield variety, compared with 10% for larger-cap companies. Small caps also have a weighted average debt maturity of five years compared with nine years for large caps, meaning that small-cap debts will come due sooner, according to BAC.

Duck, Duck…Goose: After weeks of relentless 52-week lows for many stocks, things changed for the better last week on that front. Several SPX stocks hit 52-week highs on Thursday, the first time we’ve seen that to any big degree since this emergency began. While the stocks posting new highs included “defensive” companies in sectors like gold mining and real estate, any sign of investors chasing things higher speaks to growing confidence that this rally isn’t just a head-fake. It might be worth watching in the coming week if this kind of momentum can continue as earnings start pouring in. It might feel like many companies are raining on this parade with either dire outlooks or no outlooks at all.

Half Back: Thursday’s rally looked significant because it brought the SPX briefly to just above 2800 before losing its grip late in the day. This level marks roughly the halfway point between the closing low of 2237 posted March 23 at the depth of the downturn and the 3386 all-time record high close in mid-February. As the new week begins, it might look constructive technically if the market can get above that point and settle there. However, that wouldn’t necessarily mean we’re out of the woods.

While it’s always a stretch to compare one era’s performance to a previous one, you do hear a lot of talk about how this nearly two-month skid compares to the bear market of 2007–2009. On the first downward leg of that rough period, for instance, the SPX fell 16% from the all-time high posted in mid-October 2007 to what turned out to be a temporary low in mid-January 2008. It then regained nearly 50% of the losses by May. That turned out to be what some technicians call a “bull trap.” As market historians can tell you, it was a long way down from there to the ultimate 12-year SPX bottom of 666 nearly a year later.

No one is saying this is 2008 again and that a 50% recovery is something to necessarily worry about. That was a very different time and also a different type of bear market, where the country’s banks and financial system were at the epicenter of the problems. This time, banks look strong, which gives the system more of a solid base where it can potentially build on a rally—provided the virus doesn’t get worse. That’s the real wildcard, and no one has an answer as to how long it might take.

TD Ameritrade® commentary for educational purposes only. Member SIPC. Options involve risks and are not suitable for all investors. Please read Characteristics and Risks of Standardized Options.

Could we see an extension of the trend next week?

NZD/USD is trading 0.39% higher on the session despite thin holiday trade. There is a key resistance zone on the upside that the bulls need to challenge. NZD/USD daily chart Despite very thin volume on […]

US Dollar Price, News and Analysis: The US dollar and a dead cat bounce. US Labor Report, released on Friday, is now key Recommended by Nick Cawley Brand New Q3 US Dollar Guides The US […]

5 Mistakes that I made as a Beginner in Trading