It has been quite a year for Bitcoin, both in terms of price action and adoption. After recording its biggest daily price drop to $3,600 in March due to the COVID-19 pandemic, the cryptocurrency is now trading less than 25% from the all-time high of 2017.

Analysts are bullish and believe that bitcoin is poised for even bigger moves, and the digital asset could reach higher highs if the current bullish trend continues.

With the asset currently trading above $16,500 after a drop to $15,800 over the weekend, Bitcoin’s market valuation is now more than $304 billion. According to McGlone, the $20,000 price level is the primary hurdle preventing the asset from achieving a $1 trillion market cap. 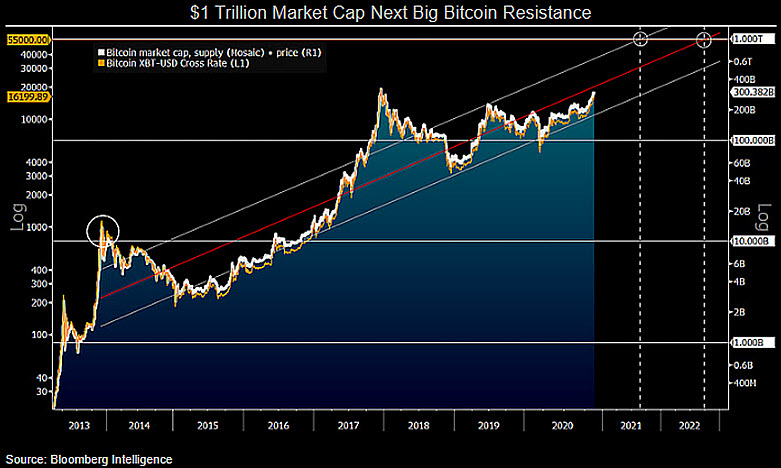 The Bloomberg analyst thinks the largest cryptocurrency is “in an early price-discovery stage and may simply continue its ascent in 2021.”

He describes Bitcoin as the “digital version of gold but with a more limited supply and a history of adding zeros.”

McGlone also notes that the “mainstream adoption is rising” for Bitcoin and that perhaps would provide the significant boost the cryptocurrency needs to break the $20,000 price hurdle.

Bitcoin saw its highest adoption rate this year in its 11-year history. From publicly traded companies like MicroStrategy and Square adopting it as a primary reserve asset to PayPal integrating it into its payment network, all of which have helped positioned Bitcoin in its current bullish trend.

While McGlone believes the current bull run may continue into the next year, Thomas Fitzpatrick, Managing Director at multinational banking giant Citibank, predicts that the trend could take bitcoin to a price of $318,000 by the end of 2021.

Fitzpatrick gave the bullish prediction after analyzing Bitcoin’s historical price performances. According to him, the current bull market started in December 2018, and BTC could reach groundbreaking price territories if the trend continues.

Like many others, Fitzpatrick believes Bitcoin is the new gold. He said that the crypto asset’s limited supply and digital forms are two of its most distinctive features.

Despite Cautiously Rising, On-Chain Data Says Bitcoin Is Due for a Steep Correction

The pioneer cryptocurrency continues trending upward despite mounting uncertainty in the market. While data shows Bitcoin has more room to go up, different metrics suggest that a correction may come before it advances further. Bitcoin […]

Bitcoin’s weekly chart posted a clean breakout above resistance with a 13.1% rise in prices the week ending Oct. 25. Since then, BTC has continued to rise to a new yearly high above $13,500. BTC/USD […]

Bitcoin had a rather unproductive week of trading as it declined from about $17,750 to where it’s currently at $11,500, losing about 2% in the process. However, the last seven days were not without their […]

Equities traded mixed yesterday and today in Asia, with some investors staying optimistic over a potential coronavirus vaccine, and others perhaps starting to worry again over the virus’s economic effects. In the FX sphere, the […]

RSI Divergence Hints at Pullback Ahead of NFP

Following increased fluctuations taking Bitcoin from $18,300 to $19,300, the asset has calmed and trades above $19,000. Most alternative coins have also remained relatively stagnant on a 24-hour scale after the recent roller-coasters. Bitcoin Rises […]

French regulator demonstrates sour grapes and a very unusual view on post-Brexit electronic trading. What are they talking about? French securities regulator the AMF has told the EU that it should fix its derivatives trading […]