The end of 2019 is fast approaching! (what a year it’s been…) Following on from the original “”, the , and the , here’s the final update to the 10 charts to watch in 2019. The key purpose of this article is to update the charts and see how things are tracking relative to where I saw things at the start of the year.

It also serves as a bit of a preview to the 2019 End of Year Special Edition of the Weekly Macro Themes report, which I will be publishing next week. Part of that report is what I consider a really important discipline of taking stock of my past work and seeing what worked well and what didn’t (and therefore where I can maintain a high standard as well as improve and enhance what I’m doing).

With research it’s a little bit different to trading or portfolio management where you basically get real time insights from your PnL or performance reports about what’s working/not working, in research where your job is to support the portfolio manager it can be a bit more subtle (less so on specific ideas, but more so in regards to work that fills out the bigger picture or helps lower the threshold for action).

So keep an eye out for that report.

But back to the task: in the original article I shared what I thought would be the 10 most important charts to watch for multi-asset investors in the year ahead. My original overarching thoughts/themes on the outlook were:

“Overall, the theme of “transitions” I think captures a lot of the major moving parts: a transition for central banks from suppressors to sources of volatility, rotation across assets and markets, and a transition stage in the business/market cycle. Risk is clearly elevated, but as the charts show; so too is opportunity.”

As for what’s changed at a high level on the outlook from here, transitions again becomes a key word with central banks having now come full circle going from significant tightening to now significant easing. We have indeed seen some rotation across assets/sectors/styles and this has resulted in a lot of relative metrics becoming stretched and looking just visually like they’re at a turning point (e.g. small vs large, value vs growth, EM vs DM, cyclicals vs defensives). We have also seen a transition stage in the cycle, but perhaps not what you think: it looks like another mini-cycle is underway, a sort of mid-cycle reset moment or late-cycle extension as I have termed it. Risk was there to be found in 2019, but opportunity definitely was also, with both equities and bonds performing fairly well on a YTD basis. I won’t delve too much into the 2020 outlook (that’s one for next week), but you can probably gather my drift here.

With that all said, let’s get into the charts! [Note: I have included the original comments from back at the start of the year, so you can quickly compare what I’m thinking now vs what I said back then]

1. Deflation Risk: There’s a couple of things to note with this one, firstly, yes economic deflation did sweep the globe and we have seen recessionary conditions in the export/manufacturing sector of a lot of economies and regions. Secondly, just as the breadth of equity markets in decline spiked late last year, we’ve seen a stark turnaround in the later part of this year. If you ask equity markets, deflation risk is dissipating.

“Deflation Risk: as I write, over 80% of world equity markets are in “deflation” (price negative YoY%), the risk here is that we see the black and blue lines turn up (proportion of countries seeing forward earnings and industrial production contracting on an annual basis), and if they do it will probably leave us all feeling a little black and blue, because when it comes to economic deflation, what we’re really talking about is the risk of a global economic recession. Keep this chart front of mind and top of your radar this year.” 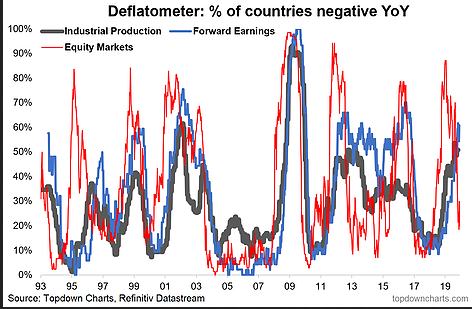 2. Manufacturing PMIs—EM vs DM: Interestingly on this we did see ongoing relative resilience in emerging markets. By contrast the EM (Emerging Markets) manufacturing PMI has been relatively stable vs the large reset in the DM (Developed Markets) manufacturing PMI. This is going to be a really interesting one to watch going into 2020. So far in the post-financial crisis world, we have only seen EM PMIs outperform DM PMIs when DM PMIs fall further than EM, so it will be interesting to see if EM can outperform during a potential global growth rebound going into 2020.

“Manufacturing PMIs: down with DM, up with EM? It’s early days, but we’ve been seeing some stabilization in EM economic data (and softening across DM). Given the growing size and influence of EM economies this could be a key chart in determining how the previous chart plays out.” 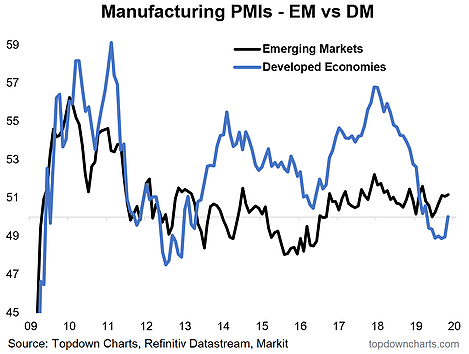 3. EM vs DM Equities Relative Performance: This one remains a work in progress. Short-term there’s a lot that can happen around that blue line, but longer term I think this one is still one of the key charts for asset allocators to be across (as well as all the other factors, charts, and moving parts that build up the bigger picture around this important theme). Keep this one on your radar.

“EM vs DM – Equities: this one also ties in closely with the previous chart, because this emergent economic divergence is among the many factors (including valuation) which I think will help EM equities comfortably outperform vs DM in coming years.” 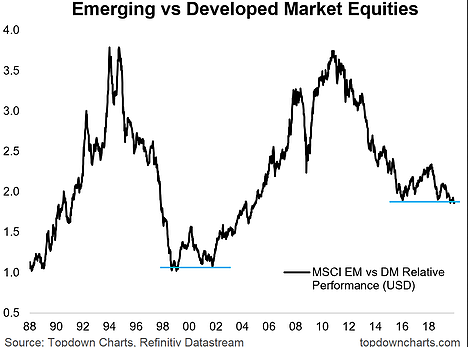 “Global cyclicals vs defensives – a key theme in 2018 with rotation well underway. But the key one here (EM again!) is the red line and the nascent rebound: watch closely for follow-through. Since initially publishing this chart in the end of year report we’ve actually started to see the other regions begin to turn up too (…just like how EM rolled over first).” 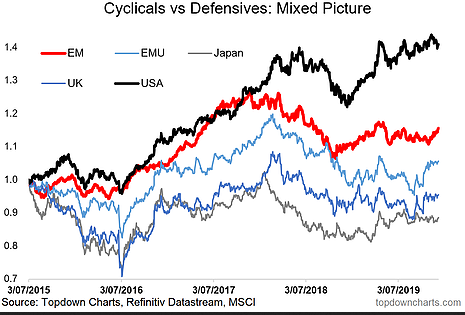 5. Global Monetary Policy Trends: After central banks realized their (policy) mistake in excessive tightening into a trade war, and as the economic data began to sour, they quickly pivoted to easing. In short, 2018 was the year of tightening, 2019 was the year of easing. This has profound implications for the near-term growth outlook, but I wonder if it might also impact the medium-term view… will central banks switch back to tightening late next year or will they let it run a bit more this time around? It’s a very important question and one for further thought, but one for later next year.

“More and more global central banks are shifting into tightening mode. My guess is we’ll see more of the same here and more of monetary policy being a source (vs suppressor) of volatility.” 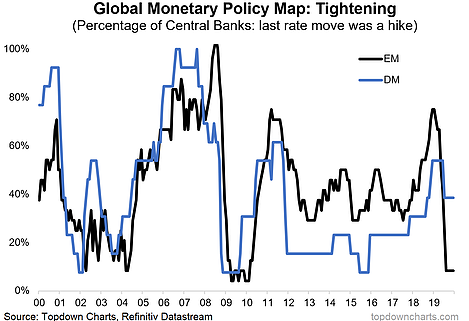 “One impact of monetary policy tightening is that cash becomes incrementally more attractive (as an income generating asset) beyond its core role of capital preservation. Look for cash allocations to rise from record lows (as indeed, they have already started to do so).” 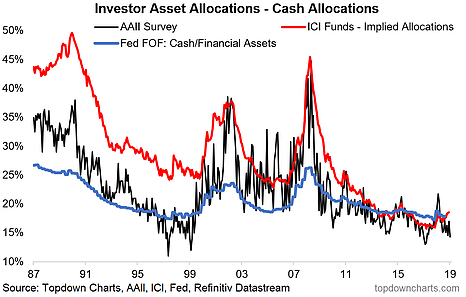 7. U.S. High Yield Credit: U.S. HY credit spreads got a stay of execution with the (and the global monetary policy pivot for that matter). Indeed, corporate credit delivered fairly decent returns this year as a mix of improved risk appetite (relative to December) and a duration kicker (falling bond yields) helped the cause. For credit to really blow up you need to see an actual recession and spike in defaults, and while that’s not my base case, equally it’s hard to get too excited about credit given valuations and duration risk.

“Higher cash rates may cause issues for those who opted to push risk for income: US high yield credit is in the final innings; anticipate wider spreads ahead.” 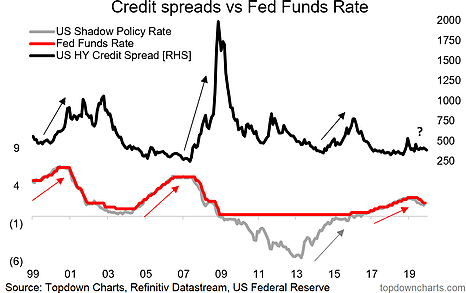 8. Global Equity Valuations: Around the turn of the year, global equities actually got to quite cheap levels (ok not quite 2008 cheap, but actually in many cases cheaper than the 2015/16 twin corrections and near-miss global recession). Where things sit now there is a decent amount of dispersion—it’s easy to find cheap markets and expensive markets, but the median country valuation is around long term average… at worst it’s fair value, but certainly not expensive (again, there are exceptions to this… *cough* *cough*).

“In the wake of the global equity market correction it’s becoming easier and easier to find a bargain. Valuations have already reset to some of the previous major market lows. While global equities could get cheaper yet, the probability is increasingly in favor of long term investors at these levels.” 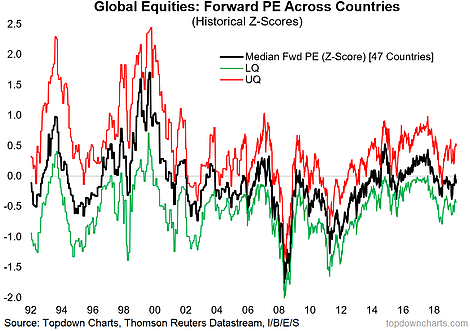 9. Commodities: Commodities remain undervalued and lightly positioned and remain in search of a catalyst to escape the range. I was looking for EM/China on the demand side, and a weaker to help, but I think those are going to be more stories for 2020 than this year! So I would be keeping this one high on the radar, looking for a clear breakout either way, and in particular focused on the macro catalysts.

“Beset by numerous headwinds and cross-currents last year, commodities ended 2018 looking un-loved and undervalued. As with the previous chart, there’s always room to go lower, but as long as the global economy avoids recession and if China/EM do ultimately stabilize and improve the case for commodities starts to look very good. And it’s often that you see commodities tend to do well later in the cycle. As the window starts to close for U.S. dollar strength, that could be the final element to fall into place for commodities (and EM).” 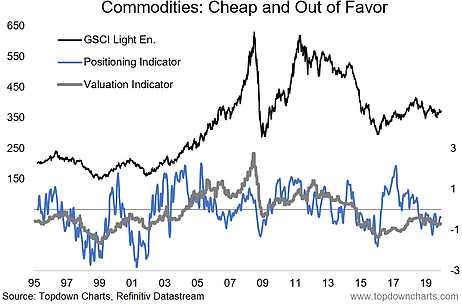 10. China A-shares: At the turn of the year returned to deep value play status—valuations got to a point where you could close your eyes and ears and just buy, and initially it worked (at one point China A shares were up about 30%), but as the year rolled on the trade war and ever distant deal took its toll, leaving the market up only about 17% since then. It goes to highlight how useful valuation can be particularly at an extreme and after extreme moves, but also given valuations still remain relatively low in the scheme of things it certainly remains of interest as attention shifts to 2020. 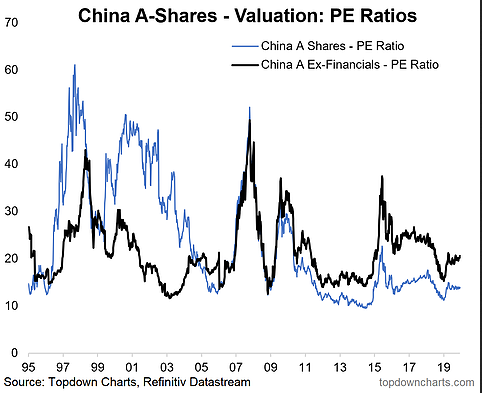 “Last but not least is China again (our China stimulus chart was number 10 last year, and it remains very important), this time China A-shares in particular. A lot went wrong for China last year, and in my mind that simply sets the stage for things to go at least less wrong, if not right for China this year. Trump has helped make China A-share valuations great again (cheap again). All that’s required now is a catalyst and I can see multiple candidates.”

CPI Was A Non-Event For USD: Watch These Levels

US Dollar, Gold and VIX Must Watch Markets with Trade Wars Competing with Liquidity

We have closed out a week where both trade wars and recession worries have regained significant traction. You wouldn’t have noticed that threat, however, if you were only referencing price action from market benchmarks like […]

U.S. President Donald Trump is likely to meet with his top trade and economic advisers on Thursday to discuss whether to impose planned December 15 tariffs on nearly $160 billion in Chinese consumer goods, according […]

NZD/USD Weakness Weighs Ahead of FOMC

New Zealand Dollar Outlook: The New Zealand Dollar may slip further against the US Dollar in the longer-term, but nears oversold territory at present NZD/CAD trades near the 200-day simple moving average as it looks […]

Daily FX Market Roundup 01.28.20 Kathy Lien, Managing Director Of FX Strategy For BK Asset Management After experiencing their largest one-day decline in months, stocks rebounded on Tuesday. While some investors may hope that the […]